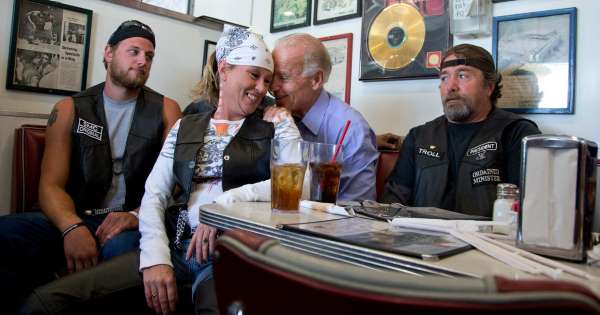 © Carolyn Kaster/Associated Press
Vice President Joseph R. Biden Jr. during a campaign stop in Seaman, Ohio, in 2012. The accusations against Mr. Biden feed into a narrative that he is a relic of the past, unsuited to represent his party in the modern era.

WASHINGTON — Joseph R. Biden Jr. came up in politics as an old-school backslapper whose greatest strength was his ability to connect. He doled out handshakes and hugs to friends and strangers alike, and his tendency to lavish his affections on women and girls was so central to his persona that it became fodder for late-night television jokes.

But the political ground has shifted under Mr. Biden, and his tactile style of retail politicking is no longer a laughing matter in the era of #MeToo. Now, as he considers a run for president, Mr. Biden is struggling to prevent a strength from turning into a crippling liability; on Tuesday alone, two more women told The New York Times that the former vice president’s touches made them uncomfortable.

For Mr. Biden, 76, the risks are obvious: the accusations feed into a narrative that he is a relic of the past, unsuited to represent his party in the modern era, against an incumbent president whose treatment of women should be a central line of attack. Mr. Biden has denied acting inappropriately but has said he will “listen respectfully.”

So far, no prominent Democrat has suggested he not run, and the women complaining about him have not claimed sexual harassment or assault. Other women have stepped forward to say Mr. Biden’s touches were welcome. But the accusations lodged against Mr. Biden have raised questions about when a “tactile politician” crosses the line into inappropriateness.

“I don’t think it’s disqualifying,” Speaker Nancy Pelosi said in an interview with Politico Playbook. But she added, “He has to understand in the world that we’re in now that people’s space is important to them, and what’s important is how they receive it and not necessarily how you intended it.”

Gloria Steinem, the feminist icon, said politicians needed to set parameters: “The way out is simple. Our bodies and voices belong to us — that should be the first step in democracy. Just ask before hugging.”

With a vibrant, youthful and multicultural field of candidates on the Democratic stage — and after a midterm election that swept dozens of women into Congress — Mr. Biden is already facing questions about whether this is the time for an older white man to carry his party’s banner into 2020. His handling of the 1991 confirmation hearings of Justice Clarence Thomas, who was accused of sexual harassment by the law professor Anita Hill, has also been the subject of scrutiny.

Now some analysts are envisioning President Trump — who admitted on videotape to grabbing women without their consent — tagging the former vice president with a nickname that has emerged on the internet: Creepy Uncle Joe. (A pro-Trump group, the Great America PAC, said Tuesday it would release a “Creepy Joe” Biden ad.)

© Ethan Miller/Getty Images
Caitlyn Caruso said that Mr. Biden placed his hand on her thigh and hugged her “just a little bit too long” at a campus event on sexual assault several years ago.

As if on cue, the president went after Mr. Biden at a fund-raiser in Washington on Tuesday night. Cracking a joke about asking for a kiss, Mr. Trump said, “I felt like Joe Biden.”

For Democrats, that is problematic.

“It opens the door for a discussion about whether Joe Biden can actually credibly take on Donald Trump on a series of issues that the Democratic Party is seen as quite strong on,” said Jennifer L. Lawless, an expert on women in politics at the University of Virginia.

The list of women coming forward is growing. Caitlyn Caruso, a former college student and sexual assault survivor, said Mr. Biden rested his hand on her thigh — even as she squirmed in her seat to show her discomfort — and hugged her “just a little bit too long” at an event on sexual assault at the University of Nevada at Las Vegas. She was 19.

Ms. Caruso, now 22, said she chalked up the encounter at the time to how men act, and did not say anything publicly. But she said it was particularly uncomfortable because she had just shared her own story of sexual assault and had expected Mr. Biden — an architect of the 1994 Violence Against Women Act — to understand the importance of physical boundaries.

“It doesn’t even really cross your mind that such a person would dare perpetuate harm like that,” she said. “These are supposed to be people you can trust.”

D. J. Hill, 59, a writer who recalled meeting Mr. Biden in 2012 at a fund-raising event in Minneapolis, said that when she and her husband, Robert, stepped up to take their photograph with the vice president, he put his hand on her shoulder and then started dropping it down her back, which made her “very uncomfortable.”

Her husband, seeing the movement, put his hand on Mr. Biden’s shoulder and interrupted with a joke. Ms. Hill did not say anything at the time and acknowledged that she does not know what Mr. Biden’s intention was or whether he was aware of her discomfit.

“Only he knows his intent,” she said. But norms are changing now, she said, and “if something makes you feel uncomfortable, you have to feel able to say it.”

Even as these women come forward, a counternarrative has begun to emerge, from women like Stephanie Carter, the wife of the former defense secretary Ashton B. Carter, who has complained that a photograph of Mr. Biden with his hands on her shoulders has been widely misinterpreted. She pushed back in a post on Medium titled “The #MeToo Story That Wasn’t Me,” writing that she saw the gesture as “means of offering his support.”

Erin Bilbray, a former Democratic congressional candidate from Nevada, also came to Mr. Biden’s defense. During a meet-and-greet in a private room with her family before an event in 2014, she said, Mr. Biden “hugged me” and “kissed me on the head.”

“It was a very nurturing, supportive action,” said Ms. Bilbray, now 49, who also posted about her encounter with Mr. Biden on Facebook on Sunday. “It was not anything other than that.”

Mr. Biden has been touchy feely with men, too, and he is hardly the first politician to make waves for such displays. Former President George W. Bush was captured giving Chancellor Angela Merkel of Germany a quick shoulder massage at a Group of 8 summit meeting in Russia, prompting a headline in The Guardian that read “Bush Rubs Merkel Up The Wrong Way.”

But perhaps none have employed the use of touch as liberally as the former vice president. People who know Mr. Biden are virtually unanimous in their assessment of him as an inveterate hugger who has no ill intent — “a very affectionate individual who is a natural toucher,” said Senator Susan Collins, Republican of Maine.

In a Twitter thread on Tuesday, Jean Carnahan, the former senator from Missouri, described how caring Mr. Biden was after she arrived in the Senate, taking the seat of her husband, who had died weeks earlier in a plane crash. Mr. Biden had also suffered the loss of a spouse, shortly before he joined the Senate in 1973.

“It was his empathy and encouragement more than that of any of my colleagues, that gave me strength to meet each day,” Ms. Carnahan wrote. “And, yes, I sometimes, got a shoulder pat or even a head kiss. Joe has a deep desire to share in the lives of others — their grief, pain, and joy. He reaches out through the human touch to connect and express those feelings.”

Meghan McCain expressed similar sentiments, writing on Twitter: “Joe Biden is one of the truly decent and compassionate men in all of American politics. He has helped me through my fathers diagnosis, treatment and ultimate passing more than anyone of my fathers friends combined. I wish there was more empathy from our politicians not less.”

But touching someone you know is one thing; touching complete strangers, as Mr. Biden often does, is another. Even so, former Biden aides said it never came up as an issue, and no one dissuaded him from the behavior. And it was hardly a secret.

“This is stuff mostly that he’s done in front of everybody,” said David Axelrod, who was a senior adviser to President Barack Obama while Mr. Biden was vice president. “I’m sure his intent was benign, but through the lens of today, it looks like something different.”

There may also be a generational component to that lens. The controversy around Mr. Biden erupted over the weekend when Lucy Flores, a former candidate for lieutenant governor of Nevada, described how Mr. Biden placed his hands on her shoulders, leaned in to smell her hair and “proceeded to plant a big, slow kiss on the back of my head” before she went onstage at a campaign rally.

Ms. Flores was 35 at the time. “It was completely inappropriate,” she said Sunday on CNN.

But Diane Denish, 70, who served as lieutenant governor of New Mexico from 2003 through 2010, said she had “exactly the same experience” with Mr. Biden and “had a completely different reaction to it.”

As they were getting ready to go onstage at a campaign event, Ms. Denish said, Mr. Biden “just put his hands on my shoulders and leaned back and said, ‘Go get ‘em,’ a little peck on the head. I paid so little attention to it, but I’m of a different generation than Lucy Flores.”

On Tuesday, the Biden camp sent reporters quotations from about two dozen women — including former aides, current and former members of Congress, and news media personalities including Mika Brzezinski — vouching for the former vice president. But Ms. Lawless, the political scientist, said that if Mr. Biden was to survive this episode, he would have to persuade his fellow Democrats that he could and would change.

“He can rein in his exuberance, but he is who he is,” Mr. Axelrod said. “He can discipline himself to some degree, but you’re not going to put this guy in a straitjacket.”