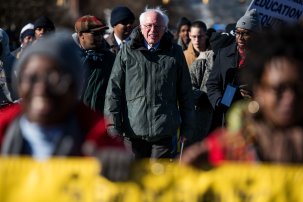 A dozen Democratic candidates for president will pitch their solutions for how to address racial inequities this week before the National Action Network, one of the most influential African American organizations in the country, founded by the Rev. Al Sharpton.

In an interview with U.S. News, Sharpton says he expects the fleet of candidates to offer precise answers on how they would shrink gaps in employment, home ownership and voting rights as well as reduce the deep disparities embedded in the criminal justice system.

It’ll mark the first time that the majority of Democratic candidates for the White House stand before the same largely black audience, in many instances, making their speeches in back-to-back time slots among their competitors.

“It’s one thing to sit in a studio or to talk to people in Iowa. It’s another thing to talk to the people that know whether what you say makes sense or not,” Sharpton says. “It’s a matter of talking to people that are in the trenches that know this and showing early that you’re going to respect the community.”

NAN has 89 local chapters around the country as well as radio programs in Birmingham, Detroit, Cincinnati, Tallahassee and Washington, D.C.

But the main event will be the auditions from the 2020 presidential candidates before the influential assembly of black leaders, who will transmit their impressions of the fleet to their organizations back home.

In 2016, black voters comprised about 25 percent of the Democratic primary electorate and Hillary Clinton won over three-quarters of their votes.

Her former rival, Sanders, knows he’ll have to vastly improve on his performance with African Americans in order to attain the nomination. On a conference call with reporters Tuesday, Sanders co-chairwoman Nina Turner sought to smother the notion that the democratic socialist has a problem attracting black support. She cited a Morning Consult national poll that showed 71 percent of African Americans hold a favorable view of the senator. The only potential candidate with a better favorable rating with black voters is former Vice President Joe Biden.

“It continues to boggle my mind that people continue to put out the narrative that the African American community isn’t vibing with Sen. Sanders,” Turner said.

But holding a positive view of a candidate is not the same as punching a voting card for one. With two African American candidates in the race, including one female, the competition will be ferocious.

Sharpton says it’s completely possible for black voters to wait and shift their allegiance once they see electoral viability from Harris or Booker, much like they did in 2008, after Barack Obama defeated Clinton in Iowa’s caucuses.

“What made him believable in South Carolina is he won Iowa,” Sharpton says. “I think Kamala or Cory, they would have to do well in Iowa and win South Carolina for that to work. Because they have to also show black voters that they can win other than black votes. That’s what Barack did.”

South Carolina is the first state on the 2020 nominating calendar with a significant African American population. About 60 percent of the primary vote is black, and Harris and Booker have each already made three trips there this year, visiting the Palmetto State more frequently than any other.

They are still playing catch-up. Biden starts with 43 percent of the black vote in South Carolina and Sanders is second with 15 percent, according to an Emerson survey released in March. Harris starts off with just 9 percent and Booker is at 7 percent. Those numbers speak to being new figures on the national scene who are largely undefined to people outside of the Twittersphere and nonstop cable news loop.

Harris and Booker also face the relatively unique circumstance of competing with another black candidate for black support. It’s been 15 years since two African American candidates vied against each other for the Democratic presidential nomination. In 2004, Sharpton was one candidate and former Sen. Carol Moseley Braun was the other.

But he says it could be a tricky calculus if both Harris and Booker head into primary season with viable candidacies.

“I think it gives them a higher bar to reach because there’s two of them in. You’ve got to remember, Barack didn’t have another candidate,” Sharpton says.

So far, Sharpton says Booker has been the most concrete in offering up solutions to racial inequities on a range of issues.

Booker was a key player in the passage of the First Step Act, which reduced the sentencing disparities between crack and powder cocaine possession and eliminated the life sentence penalty for “three strikes” offenders. It was signed into law by President Donald Trump in December.

Booker’s Fair Chance Act would prohibit the federal government and federal contractors from asking about the criminal history of a job applicant prior to a conditional offer of employment. His bill to legalize marijuana would also automatically expunge convictions of those who have served federal time for prior use and possession offenses. And his Next Step Act seeks to build on prior reforms by proposing to cut mandatory minimum sentences for nonviolent drug offenses in half.

Sharpton has already met with most of the candidates, with the exception of O’Rourke, who he has only spoken to by phone.

“If he’s going to win our community, he’s going to have to get policy specific. And he says he’s prepared to do that. And I’m willing to wait and see,” Sharpton says.

The fact that most of the candidates have made room on their increasingly cluttered schedules for this event is a testament to Sharpton’s enduring political power.

Yet in a way, the 64-year-old Sharpton is like many a Democratic primary voter: keeping an open mind, surveying the flock, not rushing to a commitment – and possibly even changing his choice along the way.