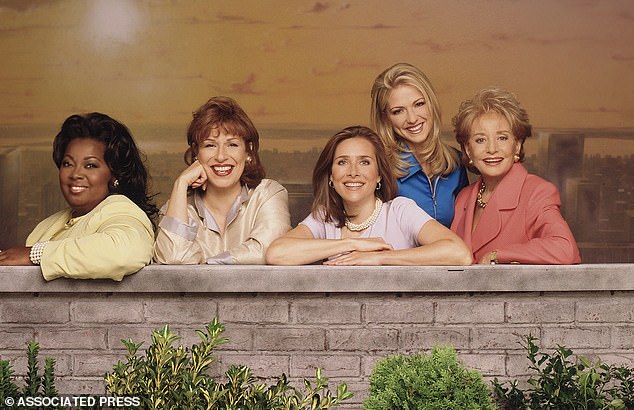 When Barbara Walters created The View the intention was to make it a serious morning TV talk show with carefully chosen, mild-mannered co-hosts.

But the show soon turned into a real life scrappy soap opera inciting bitchiness and tussles on camera, as well as behind the scenes.

The claws were out and no subject was off limits in its Hot Topics debates between the co-hosts.

‘When Barbara started the show, with a group of pals (Meredith Vieira, Star Jones, Joy Behar and Debbie Matenopoulos), news and opinion were clearly separated,’ writes Ramin Setoodeh, author of Ladies Who Punch: The Explosive Inside Story of The View, published by Thomas Dunne on Tuesday.

‘In the pre-Twitter age, reporters weren’t allowed to tell the public what they thought, let alone speculate about a president’s marriage or relationship to his mistress or children (which The View made into a national pastime).

Debuting in the late summer of 1997, Meredith Vieira described it as feeling ‘like the summer of infidelity’.

When Barbara Walters created The View the intention was to make it a serious morning TV talk show with carefully chosen, mild-mannered co-hosts. But the show soon turned into a real life scrappy soap opera inciting bitchiness and tussles on camera, as well as behind the scenes. Pictured l-r: Original co-hosts Star Jones, Joy Behar, Meredith Vieira, Debbie Matenopoulos and Barbara Walters in 1997

Princess Diana died in Paris that August and five months later, the Monica Lewinsky scandal broke. The View was the only show talking about the stain on the dress. 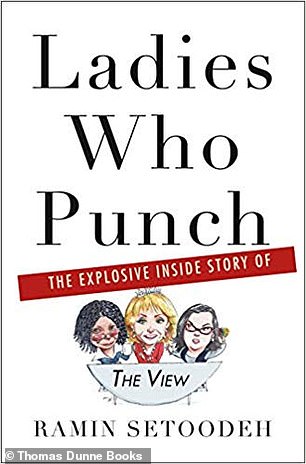 Squabbles and backstabbing were de rigeur at the show Barbara Walters built says author Ramin Setoodeh of the new book about The View, Ladies Who Punch

Both events helped catapult the show into the national spotlight.

The co-hosts targeted Donald Trump and he became the show’s biggest villain.

Co-host Joy Behar talked about his nasty separation from Marla Maples. ‘You know what? They name a kid after a jewelry story. Give me a break’!

Trump watched the show every morning without fail and went on The View often for self-promotion.

When he made a sexist comment about the Miss America beauty pageant allowing contestants to wear a two-piece bikini, Meredith commented on air, ‘Thank you, Donald. I can judge an a** when he’s fully dressed’.

Rosie O’Donnell detested Trump and would go on about his Kool Aid orange hair, his finances and his womanizing.

Walters then waged her own secret campaign against Rosie, despite the comedian’s success as a co-host. And Barbara concurred with her friend Donald, who she often met for lunch, that she was trouble.

Indeed, squabbles and backstabbing were rampant on the show and, like the title of the book, the ladies pulled no punches. Some examples are described below:

Whoopi Goldberg was  addicted to control and was vying for the hosting job – as was Rosie, who described working with Whoopi as the most painful experience personally and professionally in her life.

Whoopi took over hosting when Barbara retired and had no intention of ever letting her back – even for a few days.

Whoopi shut down any discussions about the Bill Cosby rape allegations even after dozens of women came forward with accusations of rape and that infuriated Rosie who had problems with sitting next to ‘a rape defender’ on TV. 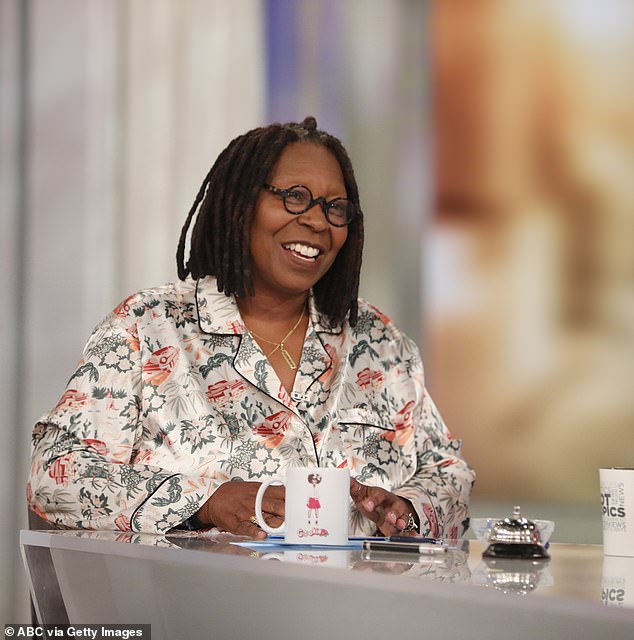 Whoopi Goldberg was addicted to control and was vying for Walter’s job – as was Rosie, who described working with Whoopi as the most painful experience personally and professionally in her life

Star became morbidly obese topping the scales at 307 lbs. She had a gastric bypass but claimed that she lost 75 lbs. in six months simply by dieting.

Star wanted to keep the surgery a secret from the public, but her co-hosts resented that she asked them to lie about how she lost the weight on the air and producers were angry because they wanted her to talk about it.

Jones shared the news that she’d had the operation in 2007, but it was only after the information had hit the gossip columns. Jones suspected it was Walters and Behar who tattled, according to the book which goes on to suggest that they also got back at her by informing Star that her fiancé was gay – or at least bisexual.

But becoming the second most popular black woman on TV, after Oprah, went to her head and she lived for the applause.

After the wedding fiasco – where she was outed for accepting freebies – she got the axe.

The weight loss and wedding circus had created an impenetrable wall between Star and her co-hosts.

Each one had something they did not want to talk about on air.

‘Barbara had surgeries that we were not talking about, Meredith’s husband had MS and she did not want to talk about it,’ Star stated.

‘I always felt it was our obligation to protect each other. And I don’t think they did the same for me’.

But it was Barbara’s journalist style of reporting – dissecting all hardships under the antiseptic light of the cameras.

Star believed something else was going on as well when she got the boot — ‘She was no longer the token fat girl’. She was now competition. 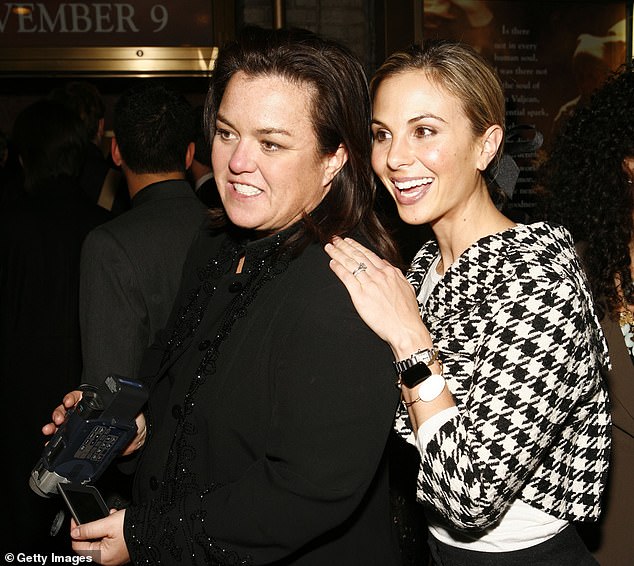 Rosie had romantic feelings for Elisabeth Hasselbeck and believed ‘there were underlying lesbian undertones on both parts.’ Hasselbeck took issue with the idea that she’d had a crush on her co-star and said: ‘I think what she said was reckless, untrue and not only insulting, disturbing, when it comes to how she felt about somebody in the workplace’

Co-host Meredith Vieira wasn’t afraid of Barbara having worked with her at ABC and liked pushing her buttons by calling her Babs and bringing up sex whenever possible.

Joy liked making out with her cohosts as pretend lesbians –just to piss off Barbara.

Rosie had romantic feelings for Elisabeth Hasselbeck and believed ‘there were underlying lesbian undertones on both parts.’

Hasselbeck took issue with the idea that she’d had a crush on her co-star and addressed the subject in The View, while promoting her new book, Point of View: A Fresh Look at Work, Faith and Freedom.

‘I think what she said was reckless, untrue and not only insulting, disturbing, when it comes to how she felt about somebody in the workplace,’ Hasselbeck said.

‘If you replace what Rosie said and you take her name out and you put in Ruben or Robert, then we would be in a situation where you would see the objectification of a woman in the workplace. And that’s disturbing because where we may be really against that when it comes from a man to a woman, you don’t get a pass because you’re a lesbian objectifying a woman in the workplace. You just don’t.’

Shepherd was broke and didn’t know how much she should ask for when she was offered a hosting spot  talker in 2007.

O’Donnell, who had already left the show, told her how much the other women were earning. Shepherd said the original offer was ‘hugely, grossly low.’

‘Rosie was amazing,’ Shepherd said. ‘She said to me, ”This is what I made. This is what Joy makes, this is what Elisabeth makes.” They had offered me a salary that was lower than Elisabeth. Rosie said, ”You’re an established actress. Go back and counter with this amount!” They came up.’ 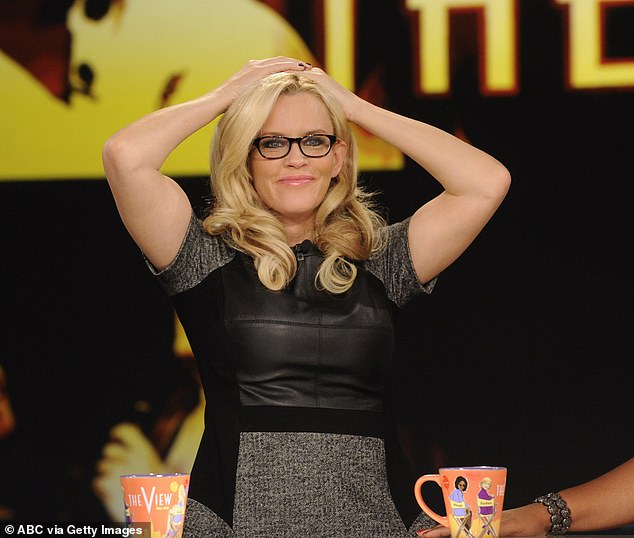 McCarthy accused Walters of constantly evaluating her wardrobe, publicly accusing her of flushing a tampon and generally making it her most memorable year in show business

When Jenny McCarthy went on The View to promote her first book, Barbara came in her dressing room and screamed at her for seven minutes about her belief that autism can be cured.

‘One of my heroes just chewed me a new a**hole’, Jenny reported.

Five years later and back promoting another book, Barbara had no recollection that Jenny had been there before and was quoting dirty stories from her new book.

Jenny became a co-host and wondered which Barbara Walters she’d see each day.

‘You know the movie Mommie Dearest? I remember as a child watching that movie and going, ”Holy cow!” I’ve never seen a woman yell like that before until I worked with Barbara Walters.’

McCarthy accused her former boss of constantly evaluating her wardrobe, publicly accusing her of flushing a tampon and generally making it her most memorable year in show business.

However, she said some of the credit goes to the power struggle that went on between Walters and Goldberg over who would moderate each show.

Debbie was a student and working part-time at MTV as a production assistant when she met a casting director at a party who told her the show was looking for another co-host.

She showed up at her interview with Barbara in pink hair, a miniskirt and knee-high boots.  She got the job after picking Madonna as one of the most important people of the twentieth century – in addition to Albert Einstein and Bill Gates.

Debbie knew she was in over her head in this group.

‘I was a little too young’, she confessed. ‘I had no idea about the majority of things happening in the world’.

Debbie thought Barbara was her fairy godmother, plucking her out of obscurity. ‘But maternal isn’t a word I’d use to describe Barbara,’ one producer snickered to the author, and believed that Walters had set up Matenopoulos to fail.

‘Throughout her career, Barbara had perfected the art of knocking both women – and men – who tried to upstage her,’ writes the author. 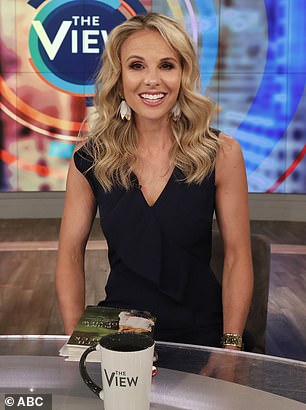 Hasselbeck was known for her conservative views on the show, sparking a fight after she remarked: ‘I believe that life begins at the moment of conception’

On a 2006 episode of the show, the hosts were discussing the morning-after pill, when the politically conservative Hasselbeck said, ‘I believe that life begins at the moment of conception.’

During a commercial, Hasselbeck ranted about what had happened to Joy Behar. ‘What the f***! I don’t even swear. She has me swearing. This woman is driving me nuts,’ Hasselbeck is quoted as saying.

‘I’m not going back. I can’t do the show like this. She just reprimanded me, and she knew exactly what she was doing. Goodbye! I’m off. Read about that in the New York f***ing Post!’

Of course, Hasselbeck did return as a co-host, although she left the show for good in 2013.

Lisa worshiped at the altar of Barbara Walters as a correspondent covering breaking news in Northern California so she was eager to try the co-hosting gig.

Meredith assured Lisa that the other co-hosts would be supportive.

‘But the witches of Eastwick could come out at any moment’, Star howled – and they did.

Lisa hoped to she could play the hard-hitting broadcaster and show her journalistic chops, but producers wanted her to dish about movie stars so the show would become a stage for top guests.

Lisa agreed to the challenge of a haircut on TV.

She even agreed to talk about the size of her boyfriend’s penis on-air.

‘I was very complimentary, by the way’, Ling said but it was never enough for producers who wanted all the dirt and for her to confess that one boyfriend had been cheating on her.

Time for another shakeup and Ling admitted she owed a lot to her three and a half years on the show.

‘I would say I’m a lot more liberated’.

Barbara didn’t want to retire but it was time in September 2014. She was saddened by the thought of how she’d fill her days.

The View is still on the air today after 22 seasons and 4,000 episodes.