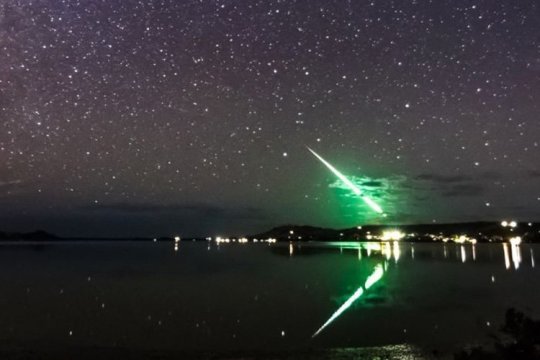 A group of amateur photographers who were attempting to capture the southern lights spotted something else completely by accident.

They witnessed a mysterious green streak that shot across the sky above them in southern Tasmania in Australia.

One of the photographers, Leoni Williams, managed to get a picture of the streak as it passed overhead at around 9.30pm.

‘I was very lucky to capture this bright green object before it disappeared over the horizon,’ Ms Williams said.

‘I’m still not sure what it was,’ she told ABC News.

‘I didn’t actually see it with the naked eye as I wasn’t watching. I had just set the camera on 30 seconds and pushed the shutter and turned back to my phone.’

Pictures of the green streak have been inviting comments from social media with the consensus being it was likely a small meteorite containing nickel and iron that sparked up as it came into contact with Earth’s atmosphere.

However, one expert has suggested it could actually have been man-made. Professor Simon Ellingsen, the head of physics at the University of Tasmania, said the object could have been the remains of a spacecraft or a satellite.

‘[The colour] is almost certainly because of the specific elements and minerals in the object,’ he said.

‘It probably wouldn’t have looked that green to the naked eye [because] digital cameras are so good at picking up the light.’

A similar green flash of light was recently captured streaking through the night sky in a remote part of Russia.

While experts believe that was also a meteor, no conclusive evidence has yet been found. No debris was discovered even though onlookers said it appeared to be heading for a crash landing.