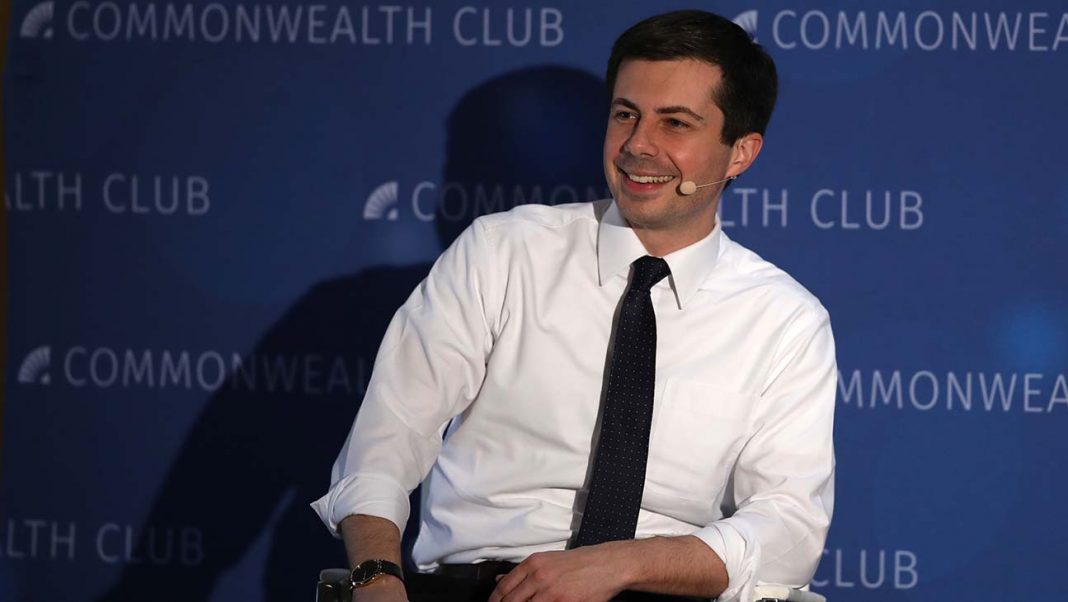 The rising presidential hopeful was joined by rivals Kamala Harris and Cory Booker in visiting Los Angeles in late March, appearing at everything from an HRC fundraiser and NAACP Image Awards to showbiz offices and backyard garden parties.

The 37-year-old mayor of South Bend, Ind. — and surging Democratic presidential candidate — was in town over the March 29 weekend to make the rounds with potential supporters and contributors, starting with a stop at the Beverly Hills offices of Brillstein Entertainment Partners.

Buttigieg (“Boot-edge-edge,” per his Twitter bio) spoke to about 40 employees, from managers to assistants, on topics ranging from universal health care, climate change, tech monopolies and the Mueller report. “I want the Republican party to spend the next generation with a very bad taste in its mouth about having let this happen,” he said of Donald Trump’s administration. Manager George Heller is credited with bringing Buttigieg into the building, and he tells THR: “We are all craving politicians who can bring us together. A lot of Dems seem to speak to only their own party and I think Pete is more transformative and reflects a part of the country that most other Dems cannot access.”

After Brillstein, Buttigieg headed to the home of former CAA agent Michael Kives (who now runs K5 Global) and attorney wife Lydia Kives (of the Bail Project) for a meet-and-greet with about 25 industry players (including CAA’s Richard Lovett, Untitled Entertainment’s Jason Weinberg, MGM’s Jon Glickman and wife Christy Callahan, and attorney Marcy Morris) before finishing the day taping a segment on Bill Maher’s HBO show. “Everyone was blown away,” a source says of that event, which the mayor attended with husband Chasten Glezman.

Buttigieg, by the way, wasn’t the only candidate in town: About 250 people piled into the backyard of Callahan and Glickman’s Hancock Park house Sunday afternoon for a Kamala Harris fundraiser, one of a handful of events that the Senator had in town over the weekend. The Hancock Park fundraiser was a low dollar event — $250 for entry and $1,500 for the host committee — and yet it raised over $70,000 for her campaign.

Harris spoke for close to an hour then fielded questions from the crowd, and she touched on criminal justice reform, anti-Semitism and LGBTQ rights before taking selfies with guests. “I fully intend to win this election,” she told the crowd, before heading to the Funny or Die offices in Los Angeles where Amber Heard introduced her in front of a crowd 200 strong that was also a low-ticket fundraiser, costing $50 per person.

Both Harris and Senator Cory Booker also made high-profile stops Saturday night, at the NAACP Image Awards at the Dolby Theatre as well the HRC gala in downtown Los Angeles where both took the stage to offer remarks. At HRC, Booker urged the crowd to fight for more. “We all have a collective responsibility not to take things as they are but to take responsibility for change.”

As for Buttigieg, he honored the collective Monday by posting his “preliminary analysis” of how much money his campaign has raised in the first quarter. “Our team’s initial report shows we raised over $7 million dollars in Q1 of this year. We (you) are outperforming expectations at every turn,” he posted on Twitter. “I’ll have a more complete analysis later, but until then: a big thank you to all our supporters.”

No word yet on Booker’s tally, but Harris beat Buttigieg by a wide margin, announcing Monday that her campaign has garnered $12 million in donations during the same frame. Per a tweet she posted, that amount came from 218,000 individual contributions. “No corporate PACs. No federal lobbyists. A real, grassroots campaign — by the people and for the people,” she concluded.

This story also appears in the April 3 issue of The Hollywood Reporter magazine. To receive the magazine, click here to subscribe.