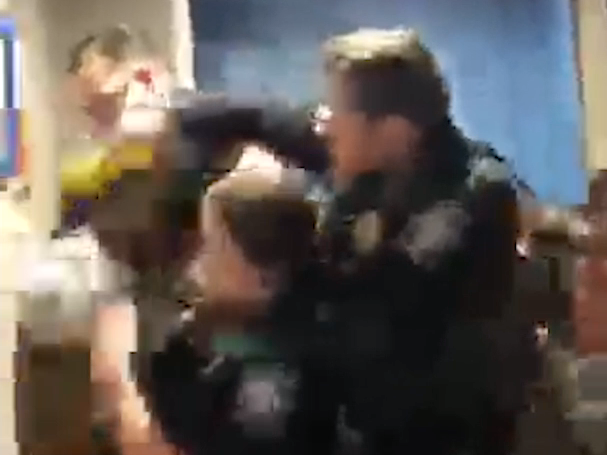 Marietta police will investigate an incident involving officers allegedly using excessive force during the arrest of a man at IHOP, the department said Monday.

An Instagram video posted by user @stylzbydeidre alleges her family member was “brutally harmed by (a) Marietta Police officer” during an altercation just after midnight Sunday at the restaurant at 179 Cobb Parkway North.

The department on Monday released its version of the events they say began with officers responding to a call of a man making threats and “gesturing like he had a gun” at the restaurant.

“The video is (unintentionally) missing the beginning of the incident,” the agency said Monday on its Facebook page. “We want the public to know that like any use of force incident, we will fully investigate the physical actions shown on the video.”

Marietta police said officers arrived at the restaurant at 12:48 a.m. and the suspect, identified as 39-year-old Renardo Nehemiah Lewis of Marietta, and his wife, became “agitated” during questioning.

Police said Lewis’ wife was demanding IHOP employees’ names and telephone numbers because she was upset they didn’t get bacon with their meal.

“The officer attempted to explain why he was there, but the suspect’s wife repeatedly stated loudly that ‘no threats were made’ and then circled back to her request for names and phone numbers,” police said. “The fact that a suspect or one of their family members states to police ‘nothing happened’ does not negate the need for officers to investigate an allegation of a crime.”

In the Instagram video, Lewis and his wife repeatedly tell officers no threat was made. One officer grabs Lewis and he responds by telling the cop, “please don’t grab me, sir.” The officer lets go of Lewis, and tells him “I need you to understand” that he and other officers were at the restaurant to investigate the complaint. The officer asks Lewis to sit down and he refuses by saying, “I don’t want to sit down.”

The officer pushes Lewis against the wall and tries to place him in handcuffs. A woman can be heard on camera telling Lewis to “let them do what they are gonna do.” Three officers are seen struggling with Lewis, who said “I’m not resisting.”

The video shows Lewis breaking free and the officers once again trying to restrain him. The scene descends into chaos as Lewis’ wife tries to get him to comply while the officers continue to wrestle with him.

“They’re gonna shoot him for eating pancakes at the IHOP!” said a woman who can be heard on video.

According to an incident report released by Marietta police, Lewis started an altercation when he “struck several officers with fist and foot, and continued assaulting officers during his resistance.”

During the “wrestling match” Lewis grabbed a female officer by the neck and tried to strangle her, the department said on Facebook.

An officer used a taser, and the cops got Lewis to the ground.

An officer is then seen on the video using what Marietta police described as a “series of short-strike punches” on Lewis while he’s on the floor. That action drew cries from two women who asked officers not to strike Lewis or to use force. Lewis is heard on the ground saying, “I can’t breathe.”

Once in handcuffs, Lewis was taken outside and transported to an area hospital for evaluation. Lewis’ wife is heard asking officers, “why did y’all do that to him?” The officer responds by stating Lewis resisted arrest and allegedly “grabbed my gun,” a claim the wife and woman filming the incident deny in the video.

Lewis was charged with public drunk, misdemeanor obstruction, felony obstruction and aggravated assault on an officer. He was being held at the Cobb County jail Monday afternoon without bond.

“While the video may seem shocking to some, we are very proud that all officers used only the force necessary to place Mr. Lewis in handcuffs,” Marietta police said.

Marietta police spokesman Chuck McPhilamy said the officer seen on video striking Lewis has not been placed on administrative leave, as the use of “short-strike punches” did not appear to violate the agency’s guidelines.

He also said officers struggled with Lewis for 90 seconds and were only able to place him in handcuffs when he brought his arms up after receiving the punches.

“Only the force necessary to get him in handcuffs was used,” McPhilamy said.

The police spokesman said the department has not received a formal complaint from the family.

McPhilamy said officers will review security cameras inside IHOP to determine if Lewis made threats before police were called to the restaurant. It will also investigate whether the officers’ actions were in compliance with departmental policies.

A New Way to Plug a Human Brain into a Computer:...