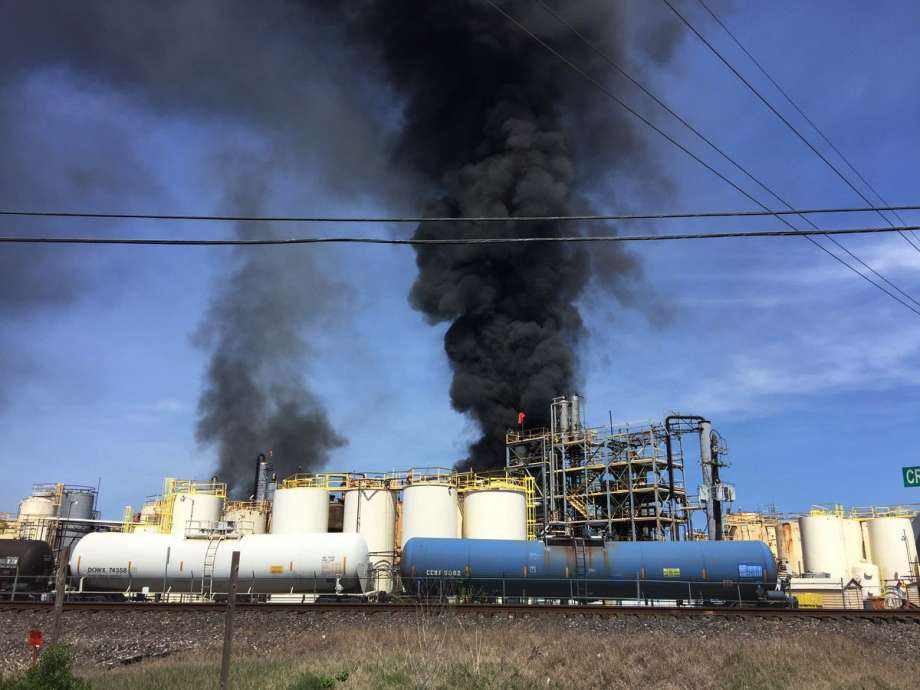 A chemical plant fire was reported at 16503 Ramsey Road in Crosby on Tuesday, April 2.

A chemical plant fire was reported at 16503 Ramsey Road in Crosby on Tuesday, April 2.

One dead in fire at KMCO chemical plant in Crosby

One person has died and two people were critically injured  in a fire Tuesday morning  at KMCO chemical plant in Crosby, authorities said.

The fire at the plant at 16503 Ramsey Road has been contained and responders are working to prevent it from spreading to nearby tanks, Rachel Moreno, a spokesperson for the Harris County Fire Marshal’s Office, said at a news conference Tuesday afternoon.

The two people who were injured have been taken by helicopter ambulance to the hospital in critical condition, Moreno said.

A shelter in place has been ordered for all residents within a 1-mile radius of the plant at 16503 Ramsey Road.

In a Facebook post, the district said students at the Kindergarten Center are not yet allowed to be picked up, and students who ride buses but live within a one-mile radius of the fire will be transported back to their campus and held there until a parent or guardian can pick them up. The district will not enter the one-mile radius zone with students on board, the post said.

KMCO contractors Brian Balcerowicz and Cesar Mendoza were in the control room when the explosion happened about 10:55 a.m.. That meant they were just a couple of feet away from danger, the former observed.

“They said there had been a problem and stay in the control room,” Balcerowicz said. “About five minutes later we heard and felt the explosion.”

The operator then told everyone to leave the premises. Balcerowicz noted that the control room was a safe place since it was explosion-proof.

The Texas Commission on Environmental Quality also dispatched officials from its Houston office to assess the scene, the agency tweeted.

Sheriff Ed Gonzalez tweeted about 1:30 p.m. that the Environmental Protection Agency has been monitoring pollutants in the air and on the ground near the fires. So far, he wrote, they had not detected chemicals at “actionable” levels.

KMCO OWNERS: What we now about the company, at HoustonChronicle.com

KMCO has activated its incident command center and dispatched its emergency response team to help first responders extinguish the fire, president and CEO John C. Foley said in a statement.

“We are deeply saddened to confirm at this time that there have been injuries and one fatality,” Foley said. “Those injured have been transported for medical treatment. Our hearts and prayers go out to the individuals involved, as well as our first responders, employees, and our community.”

Corey Prantil, 31, felt his house shake at about 10:55 Tuesday morning.

From his location about two and a half miles northeast of the KMCO plant, the ground shook, his windows rattled and it sounded like someone was trying to break in through the front door.

“I thought ‘Oh Jesus,’ went outside and drove down the road to the plant,” Prantil said. “I got down there saw where lab was, and the plant was on fire.”

Prantil said he had not been contacted by any local authorities to shelter-in-place but knew the local schools were shutting off their HVAC systems and keeping students inside as a precaution.

He watched smoke fill the sky from his back porch about an hour after the blast, looking to see whether the wind was pushing the black smoke closer to his house. It was.

The conflagration reminded him of what happened at the Arkema plant during Hurricane Harvey, when several of their tanks caught fire after the site was flooded by torrential rains. As a state trooper who responded to that blaze, he was troubled by that company’s refusal to answer basic questions about the chemicals they had on hand and how much fluid was leaking into nearby floodwaters and neighborhoods.

“It seems like Houston is the capital of plants blowing up recently,” Prantil said. “I think Harris County needs to step up on enforcement. a whole lot doesn’t get said by these companies, and I don’t think that’s right.”

Ernest Roder lives across Clara Wilson Road from the plant. Roder, 71, was working with his son on a tractor in his metal farm building when they felt a concussion.

“My first thought was a sonic boom,” Roder said as he waited out the commotion in his house.

“But it was too loud. My son thought something dropped in the shop. When we walked outside we saw the smoke and knew exactly what it was.”

Roder, who has lived on the street for nearly 50 years, said he wasn’t alarmed by the fire, figuring if he needed to evacuate someone would tell him.

“It never has bothered me,” Roder said of the plant. “Unless it gets worse we’ll just wait it out inside the house.”

About a mile west of the plant, flecks of soot and charred debris laid sprinkled across Lacy Roberts yard.

She put on nitrile gloves and picked them up so her dogs would not try to lick them, placing the black and gray flakes inside a freezer-sized plastic bag. Still, she’s worried about what she and her dogs may have already been exposed to.

“It could be anything; they haven’t said what it was yet,” Roberts said. “If I find more I’ll add it to the collection.”

The fire comes almost three weeks after a tank farm at a petrochemical holding facility in Deer Park also caught fire. Investigators have yet to get to determine a cause for the blaze at Intercontinental Terminals Inc., where 11 of the tanks caught fire, sending up a plume of smoke and stoking concerns about air quality in the area.

HOUSTONCHRONICLE.COM INVESTIGATES: Dangerous chemicals and a serious lack of information at plants around Houston.