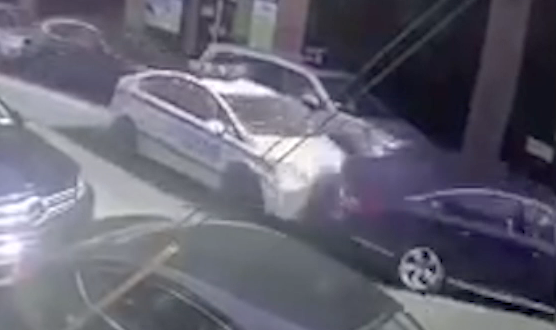 A New York City traffic cop with a case of road rage turned a Queens street into a mini-demolition derby.

The driver of an NYPD patrol car apparently became so impatient waiting for traffic to move on a tightly packed Flushing street that he throttled his ride into the car in front of him.

The ram job was captured on video taken Saturday at Prince St. and 37th Ave. The footage shows the police car waiting behind another car that appears to be idling on the narrow street for about 25 seconds with no vehicles in front of it.

Because the street is only one-lane wide, the police car and the vehicles behind it are forced to wait.

But waiting was the hardest part for this sworn officer of the law.

About a half-minute into the video, the police car rear-ends the car in front of it. A few more seconds pass and that car begins to pull onto the side of the street, apparently in an effort to park.

The police car then backs up into the car behind it and rams the car in front of it one more time, this time with a lot more force, sending it hurtling forward.

Xiao Yang, 28, was standing on 37th Ave. making a deliver for his father’s company, Good Fortune Supermarket, when he witnessed the incident, which left the cop car wedged against his delivery van.

“Everyone on the sidewalk started running,” he said.

Even after the car had come to a stop, the driver kept his foot on the gas for about five seconds, Yang said.

“He looked like he took drugs or something,” Yang recalled. “I just don’t want this guy on the streets.”

Yang’s father, Quanguo Yang, said he went to the precinct for a police report to file an insurance claim.

“The police officer told me, ‘Believe me, this guy’s in trouble,’” he said.