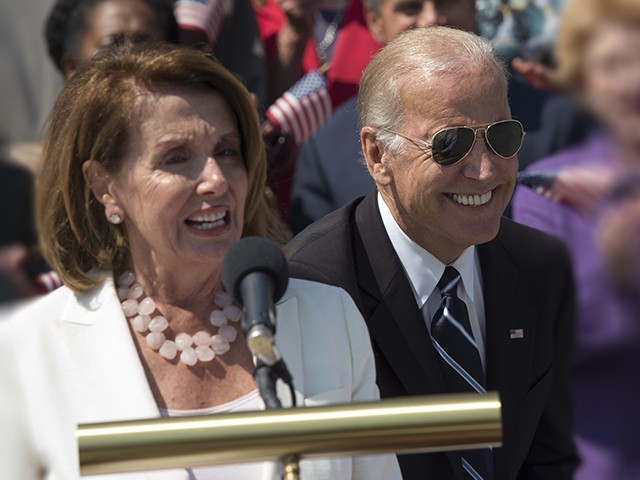 House Speaker Nancy Pelosi (D-CA) on Tuesday said #MeToo allegations against former Vice President Joe Biden do not disqualify him from running for president and recounted how he used to play a game called “Open Biden” with her grandchildren.

In an interview with Politico Playbook, Pelosi suggested Biden should join the “straight-arm club” and change his hugging style. She did not, however, address Biden’s well-documented practice of sniffing women’s hair, even total strangers like Nevada Democrat Lucy Flores.

.@SpeakerPelosi on allegations against Joe Biden: “I don’t think it’s disqualifying…I think that it’s important for the vice president and others to understand is it isn’t what was intended it’s how it was received…To say, ‘I’m sorry that you were offended’ is not an apology.” pic.twitter.com/0TjJVORlXM

NANCY PELOSI: I don’t think it’s disqualifying because I think disqualifying is what your intention is. I do think this about communication, in general, beyond this. I’m a member of the straight-arm club. I’m a straight arm-er. I just pretend you have a cold and I have a cold. But, I think that it’s important for the vice president and others to understand is it isn’t what you intended, it’s how it was received. That’s generally about communication, in general. If people don’t think they’re being communicated with even in your marriage, if your spouse doesn’t think you’re communicating, you ain’t communicating. Even if you think “but I did this and I did that.” So, it’s how it is received. So to say I’m sorry that you were offended is not an apology. I’m sorry I invaded your space, but not I’m sorry you were offended, because what’s that? That’s not accepting the fact that people think differently about communication, whether it’s a handshake or a hug.

Now, as you said, I’ve known Joe Biden for a long time. My grandchildren love Joe Biden. He’s an affectionate person to children to senior citizens, to everyone. That’s just the way he is. But, that’s just not the way. Join the straight-arm club with me if you will. And also, for example my grandchildren, when they were little, like five and six — Now they’re ten, eleven  — they would say, plays games, and then they’d say “Open Sesame except we don’t saw Open Sesame, we say Open Biden. That’s the magic word.” Because he was just so lovely to them and paid attention to them.