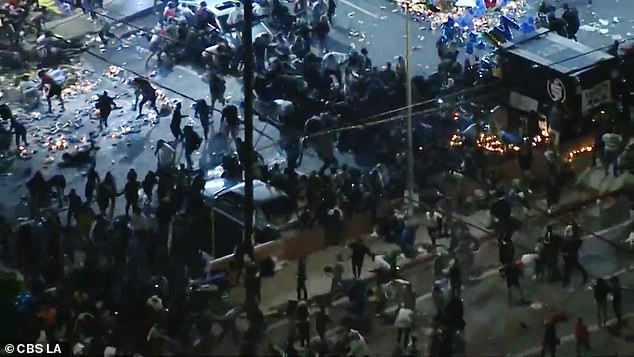 One person has been stabbed and 19 were injured after violence broke out at a memorial for rapper Nipsey Hussle outside the Los Angeles store where he was shot dead a day earlier.

Scores of fans were holding a vigil at the Marathon Clothing store in the South Los Angeles neighborhood on Monday night when the disturbance occurred.

A Los Angeles Fire Department spokeswoman said they had received a report of a possible shooting or stabbing.

Dramatic footage showed the moment a stampede broke out as terrified fans fled across the parking lot where the memorial was being held.

At least two members of the crowd were critically injured and one injury was reportedly from a car hitting a pedestrian.

Scroll down for video 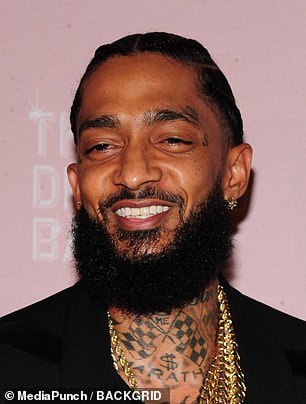 Nipsey Hussle attended a March Madness basketball game in Anaheim, California. The next day, he was shot dead outside his clothing store. Seen above in this September file photo

Several other people are being examined by medics and appear to have sustained ‘trample’ injuries as the crowd ran away.

KCAL-TV showed police carrying a man to an ambulance.

It is understood a fight may have broken out among some in the crowd, which sent panicked mourners fleeing.

The LAPD said initial reports of a shooting were inaccurate.

‘Our men and women are on scene and making every effort to protect everyone in attendance at the Nipsey Hussle vigil,’ the LAPD tweeted.

‘Reports of shots fired at the vigil do not appear to be accurate. We do have injured in the chaos and are attempting to restore order.

‘We understand the community is mourning and we feel your loss. We are asking for everyone to follow the officers directions and disperse from the immediate area.’ 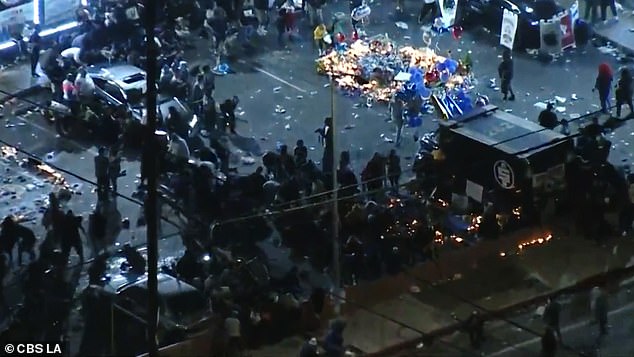 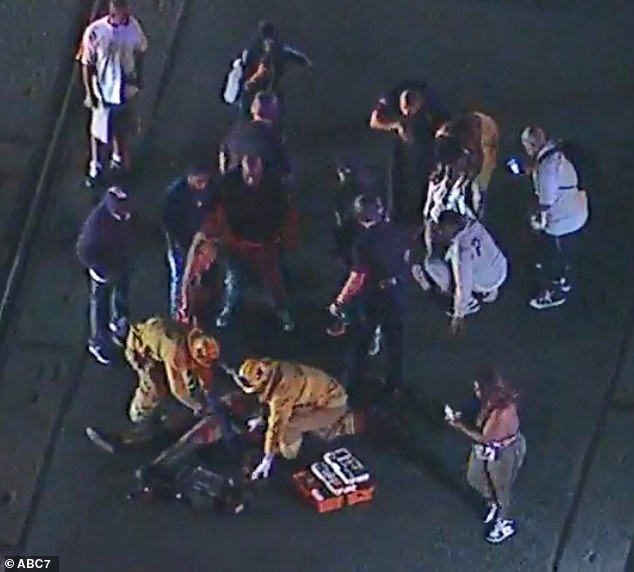 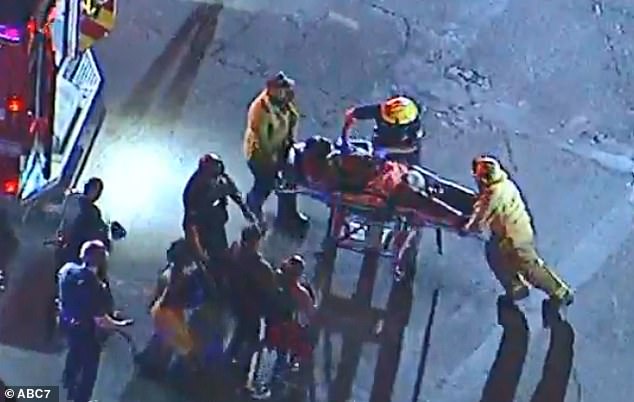 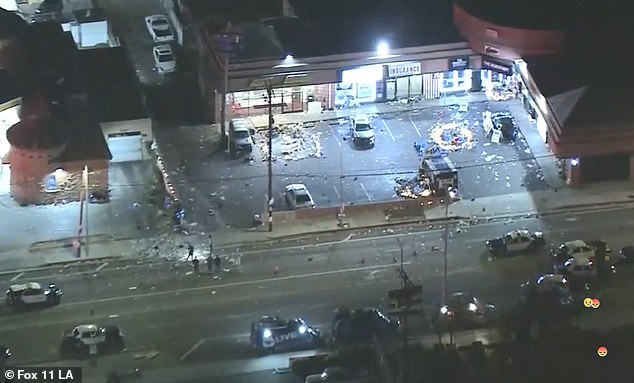 Fans had been leaving flowers and candles outside the slain rapper’s store after he was gunned down in broad daylight on Sunday afternoon.

Hussle, whose real name is Ermias Asghedom, was shot in the head and chest.

The 33-year-old was standing outside the clothing store he opened in the Los Angeles neighborhood Sunday afternoon where he grew up when a gunman opened fire, killing him and injuring two others.

Surveillance cameras from a nearby business captured a man in a dark shirt approaching Hussle and the other men as they stood by a white car parked at the front of his store.

Seconds later, Hussle could be seen dropping to the ground while multiple men fled the scene as the gunfire rang out. The gunman could be seen firing from a distance before approaching and shooting multiple times at close range.

The gunman appeared to kick Hussle before fleeing the same way he came. Eyewitness reported seeing a man fleeing in a vehicle after the shooting. 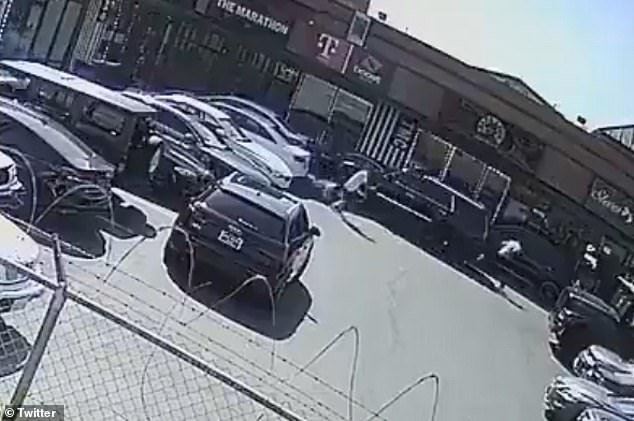 Investigators have not yet determined a motive. The LAPD released a photo of 29-year-old Eric Holder on Monday night saying he was wanted over the fatal shooting. 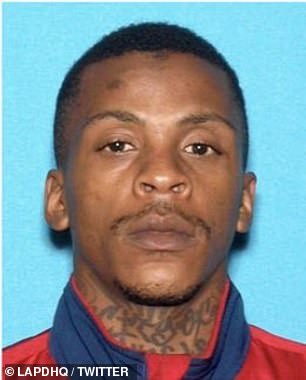 Hussle grew up in south Los Angeles and often talked about being in the Rollin 60s Neighborhood Crips gang in his teenage years.

Moments before the fatal shooting, Hussle had tweeted: ‘Having strong enemies is a blessing.’

Law enforcement sources believe the shooting may have been gang-related.

Hussle had been due to sit down with the LAPD in the coming weeks to discuss gang violence and how to prevent it.

Since his teen gang years, Hussle had become an entrepreneur and a community organizer in the area.

He was involved in the Destination Crenshaw arts project and opened a co-working space called Vector 90 in Crenshaw so young people could take classes in science, technology and math.

Hussle was nominated for a Grammy for best rap album for his major label debut, ‘Victory Lap.’ Long before that, he was well known in the South LA community for his self-released mixtapes, starting with ‘Slauson Boy Volume 1,’ in 2005.