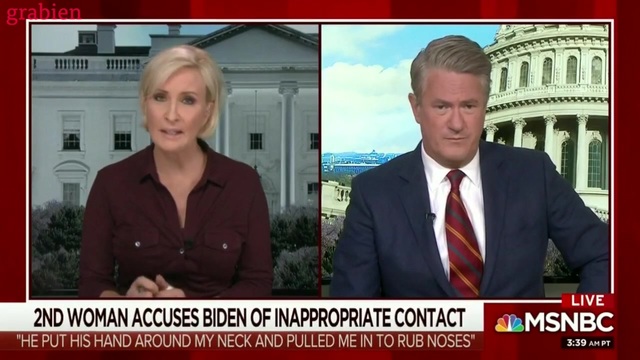 “In my many years on the campaign trail and in public life, I have offered countless handshakes, hugs, expressions of affection, support and comfort,” Biden said. “And not once — never — did I believe I acted inappropriately. If it is suggested I did so, I will listen respectfully. But it was never my intention.”

Almost immediately thereafter, many in the major media came to his defense, adopting defense that he was simply showing “affection.”

Of course, many of these same media personalities had a different view of unwanted sexual touching when the accused was not Biden, but Brett Kavanaugh.

MSNBC’s Mika Brzezinski has distinguished herself as being Biden’s most vocal defender.

“There’s a lot of things I know about Joe Biden — I’ve known him for a long time — he is extremely affectionate extremely flirtatious in a completely safe way,” she said. “I am sure that somebody can misconstrue something he’s done. But as much as I can know what’s in anyone’s heart, I don’t think there is bad intent on his part at all.”

Today, after a second woman accused Biden of unwanted sexual touching, Brzezinski was even more vociferous.

“He’s a nice guy, he’s not a predator, and this is ridiculous,” she intoned. “Let me just say it, this is ridiculous. It’s completely — the conversation has gotten out of control. And Democrats and those on the left who want to tweet me today and go nuts and get all woke, you’re eating your young. You’re eating those who can beat Trump, you’re killing the very people who have been pushing women ahead, who’ve been fighting for equal pay, who have been doing everything they can to respect women in their lives.”

The AP’s Julie Pace likewise said, “So it’s not surprising that he behaves this way, that he’s quite affectionate.”

As usual, that’s just a sampling. For more, check out the montage above.

— Bernie Sanders Applauds ‘Courage’ of Liberal Activist Who Had an Abortion

— DNC Chair Perez: Everyone Who Supports Trump Are ‘Cowards,’ ‘They Will Be Judged Harshly’

— Beto: We Only Have 10 Years Left to Act on Global Warming