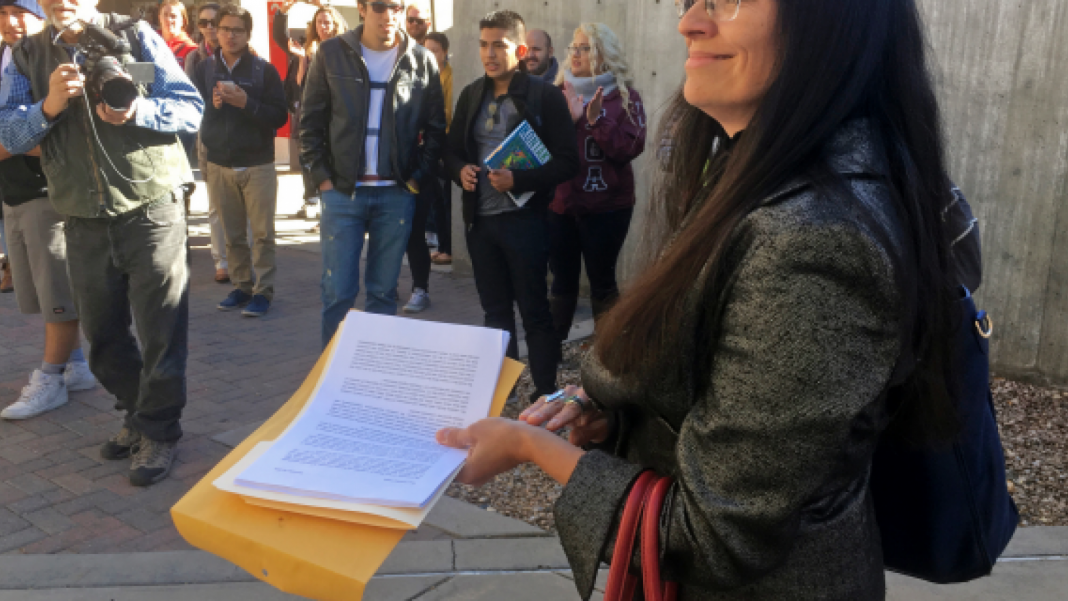 FILE – In this Nov. 18, 2016 file photo, University of New Mexico Chicana and Chicano studies professor Irene Vasquez holds a letter with hundreds of signatures, asking school president Bob Frank to declare the campus a “sanctuary university,” in Albuquerque, N.M. Vasquez and other Mexican American scholars from universities across the country are gathering in Albuquerque on Wednesday, April 3, 2019, for an annual four-day national conference amid uncertainty on immigration and ethnic studies battles on college campuses. (AP Photo/Russell Contreras, File)

ALBUQUERQUE, N.M. – Mexican American scholars from universities across the country are gathering in New Mexico this week for an annual national conference amid uncertainty over immigration and the future of ethnic studies at some colleges.

Members of the National Association for Chicana and Chicano Studies are scheduled Wednesday to start their four-day conference in Albuquerque as President Donald Trump has pledged to close a section of the southern U.S-Mexico border.

The conference also comes as activists work to save sites linked to Latino civil rights history across the U.S. Activists in New Mexico, for example, want to launch preservation efforts for the birthplace of civil right leader Dolores Huerta in Dawson, a northern New Mexico ghost town.

Aureliano DeSoto, chair of the National Association for Chicana and Chicano Studies and a professor at Metropolitan State University in St, Paul, Minnesota, said the group was happy to hold the event in New Mexico because of its long Chicano history.

DeSoto said the current political climate will be on the minds of many scholars but that “it’s also important to remember that this is not new and there has always been a pattern of seeing Mexican people are foreign and outsiders,” DeSoto said.

Trump has threatened to close sections of the border over the rise of migrants from largely Central American countries seeking asylum. Meanwhile, shelters in El Paso, Texas, and Las Cruces, New Mexico are struggling to keep up to provide temporary shelter for migrants.

Irene Vasquez, chair of the Chicana and Chicano Studies Department at the University of New Mexico, said the national group is coming to the state at a time when advocates are pushing for the expansion of ethnic studies.

For example, the University of New Mexico recently approved a plan for its Chicano Studies department to start issuing Master’s and Doctoral degrees because of vocal support from local advocates, she said.

That’s a different climate from some campuses. Last week, 13 Yale faculty members announced their withdrawal from the university’s Ethnicity, Race, and Migration Program over allegations the administration was ignoring the program and failing to fulfill promises to strengthen it.

DeSoto said Chicano and Ethnic Studies are constantly under attack from critics who question its purpose but now have more diverse student bodies who are seeking such classes.

Chicano, which refers to Mexican Americans, gained popularity during the militant Chicano Movement of the 1970s, when advocates staged school walkouts and protested the war in Vietnam.

About 500 professors and students from Arizona, California, Texas and the Midwest are expected to attend the conference, DeSoto said.

Founded in 1972, the National Association for Chicana and Chicano Studies supports Mexican American academics in social sciences, the arts and the humanities. The group pushes for faculty diversity at the nation’s universities.

Russell Contreras is a member of The Associated Press’ race and ethnicity team. Follow him on Twitter at http://twitter.com/russcontreras