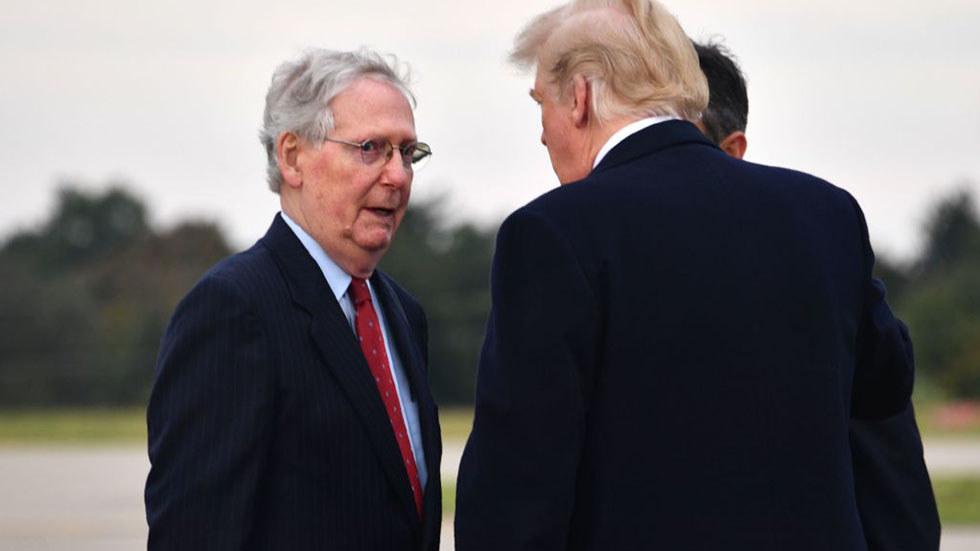 Donald John TrumpTrump slams Puerto Rico after disaster aid bill stalls Kushner addresses security clearance after whistleblower raises concerns Trump predicts new health care law after 2020 MORE in a conversation Monday that the Senate will not be moving comprehensive health care legislation before the 2020 election, despite the president asking Senate Republicans to do that in a meeting last week.

McConnell said he made clear to the president that Senate Republicans will work on bills to keep down the cost of health care, but that they will not work on a comprehensive package to replace the Affordable Care Act, which the Trump administration is trying to strike down in court.

“We had a good conversation yesterday afternoon and I pointed out to him the Senate Republicans’ view on dealing with comprehensive health care reform with a Democratic House of Representatives,” McConnell told reporters Tuesday, describing his conversation with Trump.

“I was fine with Sen. Alexander and Sen. Grassley working on prescription drug pricing and other issues that are not a comprehensive effort to revisit the issue that we had the opportunity to address in the last Congress and were unable to do so,” he said, referring to Senate Health Committee Chairman Lamar Alexander

“I made clear to him that we were not going to be doing that in the Senate,” McConnell said he told the president. “He did say, as he later tweeted, that he accepted that and he would be developing a plan that he would take to the American people during the 2020 campaign.”

After getting the message from McConnell, Trump tweeted Monday night that he no longer expected Congress to pass legislation to replace ObamaCare and still protect people with pre-existing medical conditions, the herculean task he laid before Senate Republicans at a lunch meeting last week.

“The Republicans are developing a really great HealthCare Plan with far lower premiums (cost) & deductibles than ObamaCare,” Trump wrote Monday night in a series of tweets after speaking to McConnell. “In other words it will be far less expensive & much more usable than ObamaCare Vote will be taken right after the Election when Republicans hold the Senate & win back the House.”

Trump blindsided GOP senators when he told them at last week’s lunch meeting that he wanted Republicans to craft legislation to replace the 2010 Affordable Care Act.

The only heads-up they got was a tweet from Trump shortly before the meeting, saying, “The Republican Party will become ‘The Party of Healthcare!’”

Other Republicans, including Sen. Mitt Romney

Willard (Mitt) Mitt RomneyGOP lawmakers root against Trump in court on ObamaCare Poll: Romney would beat Trump in Utah Democrats, can we talk? MORE (Utah), said they wanted to first see a health care plan from the White House.

“It’s going to be a really heavy lift to get anything through Congress this year given the political dynamics that we’re dealing with in the House and the Senate,” he said. “The best-laid plans and best of intentions with regard to an overhaul of the health care system in this country run into the wall of reality that it’s going to be very hard to get a Democrat House and a Republican Senate to agree on something.”