Home Conservative Life May looks for a way out of Brexit maelstrom as EU says... 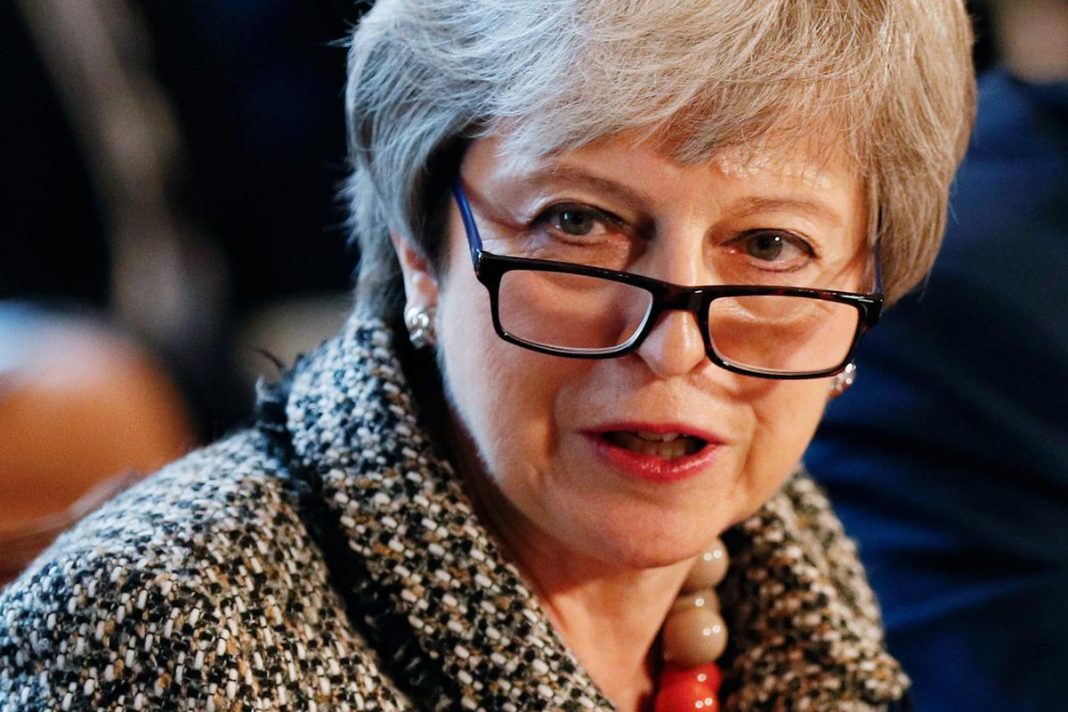 LONDON (Reuters) – European officials said on Tuesday the prospect of Britain leaving the European Union without a deal in 10 days time was growing as British Prime Minister Theresa May summoned ministers to try to find a Brexit breakthrough.

May’s proposed withdrawal agreement has been defeated three times by the lower house of the British parliament, which failed on Monday to find a majority of its own for any alternatives.

She is expected to try to put her deal to a fourth vote this week.

The deadlock has already delayed Brexit for at least two weeks beyond the planned departure date to 2200 GMT on April 12.

“Over the last days a no-deal scenario has become more likely, but we can still hope to avoid it,” EU chief Brexit negotiator Michel Barnier said in Brussels.

May chaired several hours of cabinet meetings in Downing Street in a bid to find a way out of the crisis.

But nearly three years since the United Kingdom voted to leave the EU in a shock referendum result, it is still unclear how, when or if it will ever leave the club it first joined in 1973.

Barnier said May’s deal was the only way to ensure an orderly EU exit for the world’s fifth largest economy. If the deal was rejected, he said, then London would have to choose between a no-deal Brexit and a long delay.

The cacophony of warnings over a disorderly Brexit ratchet up the pressure on British lawmakers ahead of a possible fourth vote on May’s deal and as some try to grab control of parliament to prevent a no-deal.

If May cannot get her deal ratified by parliament then she has a choice between leaving without a deal, trying to trigger an election, or asking the EU for a long delay to negotiate a Brexit agreement with a much closer relationship with the bloc.

May is under pressure from at least half of her Conservative Party to leave the EU without a deal, though some lawmakers and ministers are also telling her that she must keep the United Kingdom firmly within the bloc’s economic orbit.

May will set out next steps ahead of an emergency EU summit on April 10, her spokesman said. May is opposed to another referendum, he said.

“I hope that we can still find a solution. The British parliament has said itself that it doesn’t want a disorderly Brexit,” German Chancellor Angela Merkel said.

The defeat of May’s deal after pledging to quit if it was passed has left the weakest British leader in a generation facing a spiralling crisis.

The British electorate, its two major parties and May’s cabinet are all divided over Brexit and May risks ripping her Conservative Party apart if she tilts towards a closer post-Brexit relationship with the EU or leaving without a deal.

Investors and diplomats are in despair at the chaos and such is the volatility of Brexit news from London that some traders have stepped away from sterling – which has seesawed on Brexit news since the 2016 referendum.

“There is professional bewilderment that the motherland of common sense is in this place,” one European diplomat said.

Sterling, which has fallen from $1.50 on the day of the June 23 2016 referendum, fell towards $1.30 and some investors sought the safe haven of German and British bonds as the EU braced for the potential chaos of a no-deal.

The EU warned that a no-deal would disrupt financial markets and have an impact on liquidity.

“Markets were betting as recently as yesterday that there would be a deal and they are going to need to price in the growing risk of a no deal, including on the value of the pound,” the ECB’s Villeroy told French radio station BFM Business.

Villeroy, who is also head of the French central bank, said the ECB stood ready to lend euros to British banks if necessary, and that the Bank of England was prepared to lend sterling.

The World Trade Organisation said a hard Brexit could push 2019 global trade growth to the bottom end of the WTO’s forecast range of 1.3 to 4.0 percent.

No-deal means there would be no transition so the exit would be abrupt. Britain is a member of the WTO so tariffs and other terms governing its trade with the EU would be set under WTO rules.

With Brexit stalled, parliament has been trying to come up with an alternative but has thus far failed.

The option which came closest to getting a majority in parliament on Monday was a proposal to keep Britain in a customs union with the EU, which was defeated by three votes. A proposal to hold a confirmatory referendum on any deal got the most votes, but was defeated by 292-280.

Some lawmakers published draft legislation on Tuesday that would require May to seek a delay to Brexit beyond April 12 to prevent the United Kingdom leaving without agreement.

“This is a last-ditch attempt to prevent our country being exposed to the risks inherent in a no-deal exit,” Conservative lawmaker Oliver Letwin said.

But May is boxed in by different factions: half of her lawmakers voted for a no-deal Brexit last week while just 37 voted for the customs union option on Monday and 15 for a confirmatory referendum.

That means May’s deal is back in focus, though she must find a way to get around a ban on repeatedly bringing the same matter to a vote in parliament.

May would rather go for a no-deal Brexit than halt the leaving process altogether, she will tell senior ministers on Tuesday, a reporter for the Financial Times said.

Additional reporting by Gabriela Baczynska and Jan Strupczewski in Brussels, Andreas Rinke and Michelle Martin in Berlin, William James and Ritvik Carvalho in London and Tom Miles in Geneva ; Writing by Guy Faulconbridge; editing by Michael Holden and Angus MacSwan