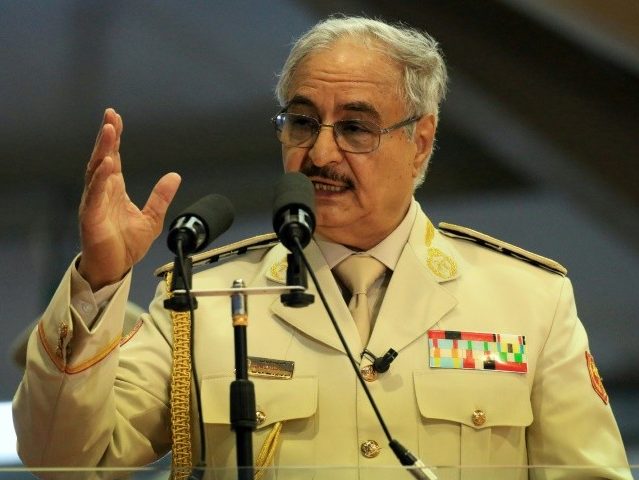 Libyan strongman General Khalifa Haftar said on Sunday that Libya’s seven-year political crisis would soon be resolved with a single government in charge of the entire country. His so-called Libyan National Army (LNA) is advancing toward Tripoli, suggesting Haftar intends to either replace the late Moammar Qaddafi as a dictator or secure himself a position of great importance in a national unity government.

Technically, the government headquartered in Tripoli is the national unity government, or Government of National Accord (GNA), as the United Nations dubbed it. In practice, the GNA has never effectively government more than a fraction of Libya.

Haftar’s forces have methodically conquered well over half the country, winning support from some Libyans by tackling minor warlords and extremist groups like al-Qaeda and the Islamic State. Others complain Haftar has violently suppressed ethnic groups opposed to his control and forcibly seized assets that should belong to the GNA.

In an interview with Al-Arabiya TV on Sunday, Haftar stated a new government of national unity would form within the next two weeks, a timeline that roughly coincides with a U.N.-sponsored national conference in mid-April.

“Within the coming weeks, Libya will witness a breakthrough in its political crisis. Libyans will have a single cabinet this month,” he predicted.

U.N. Secretary-General Antonio Guterres expressed high hopes for this conference on Saturday, citing a recent meeting in Abu Dhabi between Haftar and the current prime minister of Libya, Faiez Serraj, as a sign that Libya’s warring factions might finally come together.

Salame also said his mission was working to “prevent recent developments and tensions on the ground from escalating,” a comment that seems like it might have been directed at Haftar.

Haftar’s swift advance through eastern Libya reportedly caught the United Nations by surprise. Although the 75-year-old general has not directly threatened to attack Tripoli himself, some of his senior officers have indicated a march on the city could be in the cards, coupled with militia units inside Tripoli suddenly switching their allegiance to Haftar and leaving the GNA with little choice but to accept his demands.

Haftar’s recent visit to Saudi Arabia looks like an effort to win Saudi political and religious backing for his bid to dominate the entire country. Part of Haftar’s pitch to Egypt involved a promise to crack down on the extremist groups Egyptian President Abdel Fattah el-Sisi – himself a military leader who came to power in a coup – views as a regional security threat, and to keep the Muslim Brotherhood from extending its influence into Libya.

Haftar has been lining up political support from allies such as Egypt, the United Arab Emirates, and especially Russia, which would become very influential in a Haftar-dominated Libya. The U.N. is frantically trying to get Libya’s other feuding factions to coalesce into a respectable national unity framework before Haftar declares checkmate in Tripoli, but the competing “House of Representatives” based in Tobruk refuses to recognize the authority of the GNA and resents United Nations efforts to pressure them into an alliance.

Foreign Policy on Monday argued it might be too late to stop Haftar, who has effectively conquered most of Libya while other factions, including the U.N.-supported GNA, wasted years on ineffectual squabbling while the international community looked the other way, unwilling to come to terms with the bloody chaos unleashed by the overthrow of Qaddafi.

As Foreign Policy noted, Haftar found ways to sell some oil and bankroll his efforts despite U.N. sanctions, and he even has his own currency, distributed throughout his conquered territory with Russian assistance. He came close to essentially starting his own country last year, and then came close to negotiating a top leadership position with the GNA, launching his lightning offensive through southern Libya when those talks fell apart.

Conquering Tripoli outright would be a bloody operation that would provoke international outrage and could weaken Haftar’s grip on the rest of the country, so the safe bet is that he’s flexing his muscles and letting the GNA and U.N. know he expects a very high price for supporting a new unity government, probably something along the lines of a grand marshal position that would give him control of Libya’s armed forces and put him on par with the top civilian leadership, which might in turn be divided into prime minister and president to satisfy both of Libya’s other major factions.

Hafter must move quickly to capitalize on his momentum from conquering Libya’s oil fields, which suggests the April conference might be a bit more dramatic than merely hammering out the details for future elections and a new constitution, as currently advertised.

One theory holds that Europe is quietly pleased with Haftar’s success against terrorist groups and the reduction of refugees pouring out of Libya he has engineered, and could reward him by making Libya’s financial system more friendly towards the oil exports he controls, a powerful signal to the other Libyan factions that they had better make whatever deal is necessary to bring him on board with a new and improved unity government.

That might be a scenario acceptable to the Trump administration as well, since a stable Libya with reduced migration and no terrorist havens fits with U.S. policy objectives, a Libyan oil industry running at full capacity would serve U.S. interests in keeping oil prices low and isolating Iran, and for all of his rough edges, Khalifa Haftar could prove considerably less frustrating to deal with than the quarrelsome governments based in either Tobruk or Tripoli.