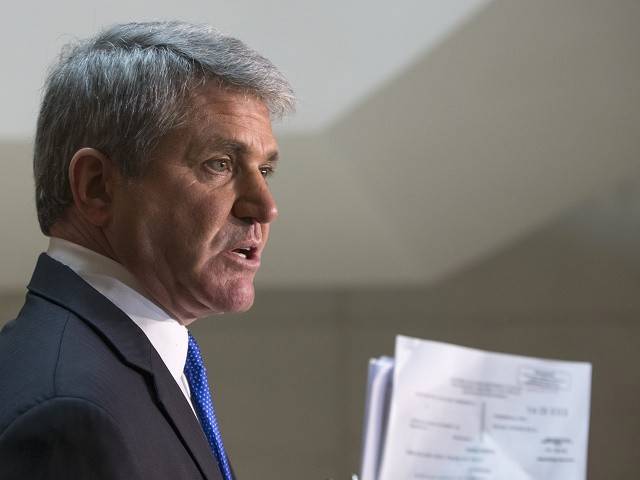 Several key Republicans have declared their opposition to President Donald Trump’s order to freeze direct aid to El Salvador, Guatemala, and Honduras, including the ranking Republican on the House Foreign Relations Committee, Rep. Mike McCaul (R-TX). These GOP critics offered the same argument as the Democrats, namely that cutting off funds to anti-poverty and law enforcement programs in the “Northern Triangle” countries will make the migrant crisis even worse.

McCaul gave a presentation at the Wilson Center in Washington on Monday in which he doubted Trump “thought it through” when he ordered the funding cut on Friday evening, expressing frustration that record numbers of migrants are pouring in from Central America through Mexico and overwhelming U.S. agencies despite half a billion dollars in American funding for programs to reduce migration.

“If we cut all this funding, and a lot of it, quite honestly, is seriously law enforcement that we’re doing down there… I think it’s going to make things tragically worse, not better,” McCaul contended, echoing the criticism made by Democrat leaders such as House Foreign Affairs chairman Rep. Eliot Engel (D-NY) and ranking Senate Foreign Relations Committee Democrat Bob Menendez (D-NJ).

McCaul made a trip to the Northern Triangle last weekend with Engel. Upon his return, McCaul said he and Engel agreed even more funding was needed for the programs President Trump wishes to freeze:

We got the presentation on what USAID is doing down there, rerouting at-risk youth into training, into computer training, away from MS-13, and we got briefed on the international law enforcement that’s taking place in El Salvador where MS-13 is prevalent, that has been hugely successful.

Ironically, Eliot and I were talking about strengthening the Central American Regional Security Initiative because I think it’s a great return on our investment. We can be very reactive at our border, to stop them from coming in.

McCaul’s position was shared by Rep. Kay Granger (R-TX), ranking Republican on the House Appropriations Committee, who conceded “funding alone will not solve the problem” but worried a unilateral halt to Northern Triangle aid would cripple some programs that have been effective at reducing migration.

The heart of the issue is whether these programs really are reducing migration in any meaningful sense, since the current border crisis is utterly overwhelming, to the point where some in the Trump administration think it could hardly get any worse.

McCaul has expressed security concerns about migrant “caravans” in the past, acknowledging that criminal gangs are assisting illegal immigrants and using the migrant tide to send their own operatives across the border, but he felt U.S. border security is currently so weak that interdiction at the source is the only way to alleviate the crisis.

He noted last May that the U.S. asylum system is easily gamed, especially when the number of applications for asylum is overwhelming, and the Central American gangs have realized children are the key to bypassing U.S. border security because American agencies have become very nervous about detaining or deporting people who reach the border with minors in tow.

Homeland Security Secretary Kirstjen Nielsen warned on Monday that the situation on the southern border “has gone from a crisis to near system-wide meltdown,” and is rapidly becoming a humanitarian calamity, because “smugglers and traffickers are forcing people into inhumane conditions.”

“Women are being sexually assaulted, and a majority of migrants report experiencing violence on the treacherous trek. Children are arriving sicker than ever before and are being used as pawns to gain entry.  And we are seeing the spread of violent crime and drugs across our southern border as criminals exploit the chaos,” she said.

Some ranking Republicans have joined President Trump in questioning the value of U.S. funding for Central American programs to reduce migration, notably including Sen. John Cornyn (R-TX), who wants to exercise closer oversight of the programs, and Rep. Michael Burgess (R-TX), who has a proposal to deduct a fine from aid to the Northern Triangle countries for each migrant who reaches the U.S. border.

“We must hold the leaders of El Salvador, Guatemala, and Honduras accountable for the instability and violence contributing to irregular migration. By withholding aid, the U.S. will incentivize the governments of the Northern Triangle to take better care of their communities and citizens,” Burgess said.

Nielsen on Monday referred to new partnership agreements she signed with the Northern Triangle countries and said the Trump administration will “monitor progress to ensure these governments take bold steps to decisively confront the crisis.”

President Trump’s order of a funding halt could be the only way to convince all concerned that the warning is serious this time around. Of course, if everyone from drug gangs and human traffickers to Central American officials knows Congress will block every administration effort to hold them accountable or improve security at the border, that warning will be taken much less seriously.