Home Breaking News Howard Schultz: Dems Are ‘Out of Touch,’ ‘Policies Are Not Realistic’ 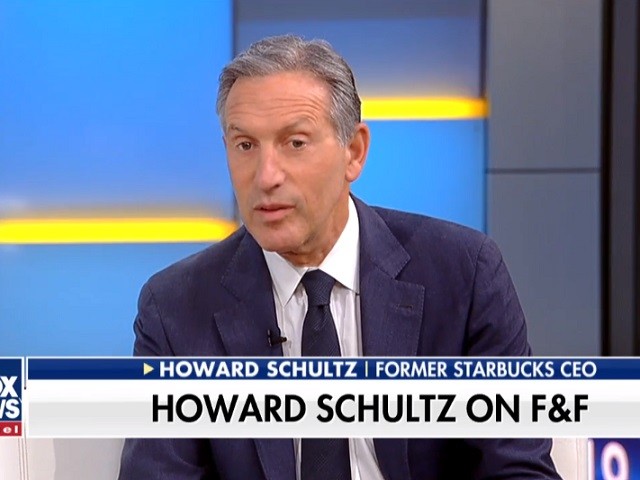 In an appearance on Fox News Channel’s “Fox & Friends” on Tuesday, former Starbuck CEO Howard Schultz, who considered himself a Democrat, explained why he was considering a run for president as an independent candidate.

Schultz took a swipe at the 2020 Democratic presidential candidates after a montage played with each of the candidates stating their left-of-center positions on various issues and called them “out of touch.”

“Well, I think you just showed clips of people who are well-intentioned, love the country – but they’re out of touch with these kind of policies that in my view are not realistic,” Schultz said. “And I think the American people are searching for a longing of truth, authenticity and obviously, policies that can be passed. But the reason that I’ve decided to consider running as an independent is not only because of what you just showed but the fact that the two-party system is broken.”

“We can’t have a moral society if we don’t have a moral government and every step of the way — $22 million of national debt, an immigration policy that is broken, health care policy, education issues, our standing in the world – and I know that you are strong proponents of the president,” he continued. “I understand that. But we have issues right now that must be solved. They will not be solved by two parties that are in bed every single day to defeat one another as opposed to representing the American people. And that’s why I think that 42% of the American people are registered as independents are looking for an alternative other than a Republican or a Democrat.”