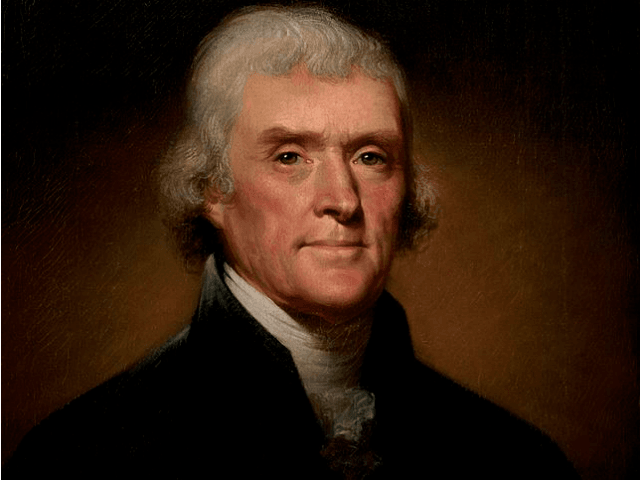 Students at Hofstra University in Long Island, New York, demanded on Friday that the school remove a statue of Thomas Jefferson, arguing that it is not possible for the university to have the statue on campus while also being an institution that “prides itself on diversity and inclusion.” Students also called on the university to train its faculty and professors to behave in a more politically correct manner.

Hofstra University students held their second annual “Jefferson Has Gotta Go!” protest of a Thomas Jefferson statue on campus on Friday, demanding that the university move the structure into a museum along with the “appropriate context.”

The Jefferson statue, which has also been subjected to acts of vandalism in the past, stands in front of the university’s student center — a location that some students have expressed frustration over, stating “it is unfortunate” that so many students and families “take photos and share hugs and smiles” in the presence of the Jefferson statue.

“So we just felt like, in addition to just, Thomas Jefferson being a slave owner and a um, sexual predator, and just, you know, awful, [the statue] is now an unavoidable thing,” said one student at an event on Friday, “it just doesn’t have a place, I think, on any college campus, like, there’s just no reason to, like, immortalize people who brutalize so many of the population.”

“I just don’t think that an institution that, you know, prides itself on diversity and inclusion, and like, offering such a rich liberal arts program can do both, like, I think you have to choose one or the other, and it seems like Hofstra is perfectly content with choosing Thomas Jefferson over literally everything else,” added the student.

Additionally, the event included demands for the university to train its staff on how to better interact with students, as several individuals went up to the podium to deliver their remarks detailing personal experiences with professors who make comments that the students have deemed unacceptable.

One student expressed her dismay upon seeing a professor post comments on Facebook in which he shared his opinion that “the university is wasting resources” by hiring a “Chief Diversity and Inclusion Officer.”

“And so, I saw this, and was like, ‘hello?’ Like, what?” said the student, “So I explained, like, the actual, like, feeling of this campus, like, what it actually feels like to be a student of color and the actual situations that we’re dealing with, because the student population right now is 54 percent white and the faculty of the population is even less diverse, it’s 79 percent white.”

The student added that she had also been frustrated with the professor’s response to her. “He went on later to — just, pretty much invalidate everything that I said, like, what my experiences were, and just, told me that I was victimizing myself,” said the concerned student.

Students circulated a petition last year calling on the university to remove the Jefferson statue over concerns regarding “slavery, rape, and anti-black racism.” The petition also argues that too many students on campus end up encountering the statue as they “walk through the Student Center for a quick cup of coffee.”

The petition also states that “Jefferson’s values aided in the construction of institutionalized racism and justified the subjugation of black people in the United States,” adding that commentators in “white supremacist chat rooms” have also embraced the founding father.

The university responded to the students’ demands by informing them that the statue wasn’t going anywhere. “I have decided that the Thomas Jefferson statue will remain where it is,” said University President Stuart Rabinowitz in a statement last May.

“On the one hand, Thomas Jefferson articulated the best of our ideals in the Declaration of Independence and was a defender of freedom in helping to create a new nation: the United States of America,” continued Rabinowitz in his statement, elaborating on why he made the decision to keep the Jefferson statue.

Rabinowitz added that while not every founding father may have lived out “the dream they had sketched out,” their words were “far ahead of their time and certainly ahead of their actions.”

“And still, today, the founding fathers represent the duality of the American character and the difficulty of our history: freedom and oppression, equality and injustice, in issues of race, gender, religion and origin, that we have dealt with since our founding and will deal with for years to come,” continued the university president.

“Yet in the documents most critical to our national character these men of their time laid out a vision of a world in which all people are created equal,” added Rabinowitz, “It is this vision we celebrate and honor in our Founding Fathers, even as we wrestle with their human and indefensible failings.”

“We shouldn’t have to ask for these things, none of them are really that radical,” said a student at the event on Friday, “College campuses all over the country are dealing with repercussions of slavery, and just, you know, historical trauma, and they’re dealing with that much better than Hofstra is.”