Home Conservative Life For Iconic Facce, What A Drag It Is Getting Caught

Lewis was arrested Saturday in connection with the March 22 robbery of a BancorpSouth branch in Gulfport, Mississippi. Cops initially identified the suspect as a “black female in her mid to late 30’s.” After producing a note demanding cash, the robber fled on foot from the bank.

Investigators subsequently identified Lewis as a suspect and nabbed him at the Houston, Texas airport upon his arrival on a flight from Mexico (where Lewis appears to have undergone some kind of cosmetic procedure).

Lewis, currently locked up in a Houston jail, is awaiting extradition to Mississippi, where a bank robbery charge awaits. Lewis is seen in the below BancorpSouth surveillance images.

Lewis was convicted at trial in 2008 for the robbery of an Alabama Credit Union location. During the robbery, investigators reported, Lewis threatened the life of a teller, saying, “No games, no jokes and get your hands up. Don’t mash any alarms. Don’t move or she’s had it.” Lewis was sentenced to 51 months in prison to be followed by three years probation. 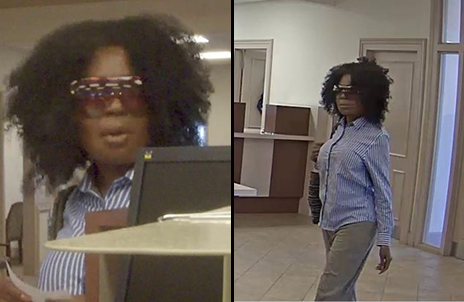