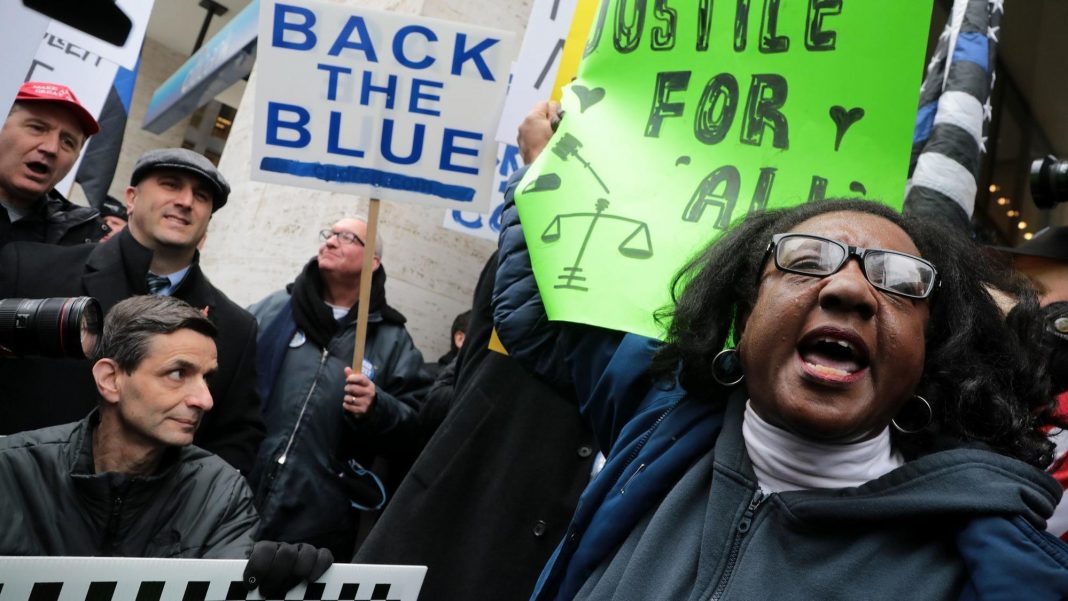 Members of the Chicago Fraternal Order of Police rallied outside the Cook County Administration Building, many wearing buttons that read “Foxx must go.”

Their demonstration was met by smaller groups, including members of the Chicago Alliance Against Racist and Political Repression, who staged a counterprotest and carried signs that read “FOP is racist.” The Rev. Jesse Jackson also lent his support.

Earlier reports that a statewide prosecutors’ group was co-sponsoring the FOP protest were incorrect, a spokesman said.

What began as two rallies centered on Foxx became a clash at times of diverging ideologies.

The scene became chaotic when the groups merged, and counterprotesters — initially positioned across the street from Foxx’s office — crossed to where the FOP members were staged.

The dueling demonstrations intensified but remained nonviolent as people from opposing sides clashed verbally, shouting and cursing at one another. Dozens of police officers were on hand to quell the conflicts and eventually used their bicycles to create a barrier between the two groups.

At one point, a group of FOP-aligned protesters yelled: “Blue Lives Matter!”

Dueling protesters from the Fraternal Order of Police and Chicago Alliance Against Racist and Political Repression rally outside the Cook County Administration Building on April 1, 2019, in response to the ongoing controversy over the Jussie Smollett case. (Antonio Perez/Chicago Tribune)

Dueling protesters from the Fraternal Order of Police and Chicago Alliance Against Racist and Political Repression rally outside the Cook County Administration Building on April 1, 2019, in response to the ongoing controversy over the Jussie Smollett case. (Antonio Perez/Chicago Tribune)

A few counterprotesters shouted “16 shots and a cover-up,” referring to the number of times 17-year-old Laquan McDonald was shot by Officer Jason Van Dyke in October 2014. A chorus of FOP protesters drowned them out with chants of “Foxx must go!”

Mike MacDonald, 60, was among those opposing Foxx. MacDonald, whose sign read “Justice for sale in Crook County,” said he has been in law enforcement for 35 years and is disappointed with how Foxx is running the office, especially how she handled the Smollett case.

“I don’t think that justice was served at all,” he said.

Chicago police union President Kevin Graham said he was pleased with the outpouring of support and that it’s critical to have “fair and just prosecution” applied to everyone.

“It shouldn’t be that you have influence, it should not be determined by how much money you have, or the color of your skin, or your religion, or your sexual orientation.

“We certainly hope that (Foxx) knows that we’re serious and that we’re not happy.”

Some said they thought the FOP’s criticisms of Foxx were racially motivated.

“This is phony justice,” said Frank Chapman, co-chairman of the Chicago Alliance Against Racist and Political Repression. “Not one person from the FOP or anyone of their ilk called a demonstration in defense of or promoting justice for Laquan McDonald.”

McDonald’s shooting long has been a focal point of activism and outrage in the African-American community. Van Dyke was sentenced last fall to 6¾ years in prison.

“What does Trump and ‘Make America Great Again’ hats have to do with anything?” Green asked. “We’re sitting here talking about how the prosecutor should deal with cases.”

The rallies were yet another development in the saga of the Smollett case.

The “Empire” actor, who is African-American and openly gay, has said he was walking from a Subway sandwich shop to his apartment in the 300 block of East North Water Street around 2 a.m. Jan. 29 when two men wearing masks attacked him, shouted racial and homophobic slurs and placed a noose around his neck.

Foxx said in February that she was recusing herself in the case but has drawn criticism for never formally withdrawing from involvement.

Last week, prosecutors dropped all charges against Smollett in exchange for community service and his forfeiture of the $10,000 he had posted as bond. The decision, which Foxx has said she was not involved in, drew swift and scathing criticism from police Superintendent Eddie Johnson and from Mayor Rahm Emanuel, who called it a “whitewash of justice.”