Home Blue Lines Dozens injured as people stampede over each other during Nipsey Hussle memorial... 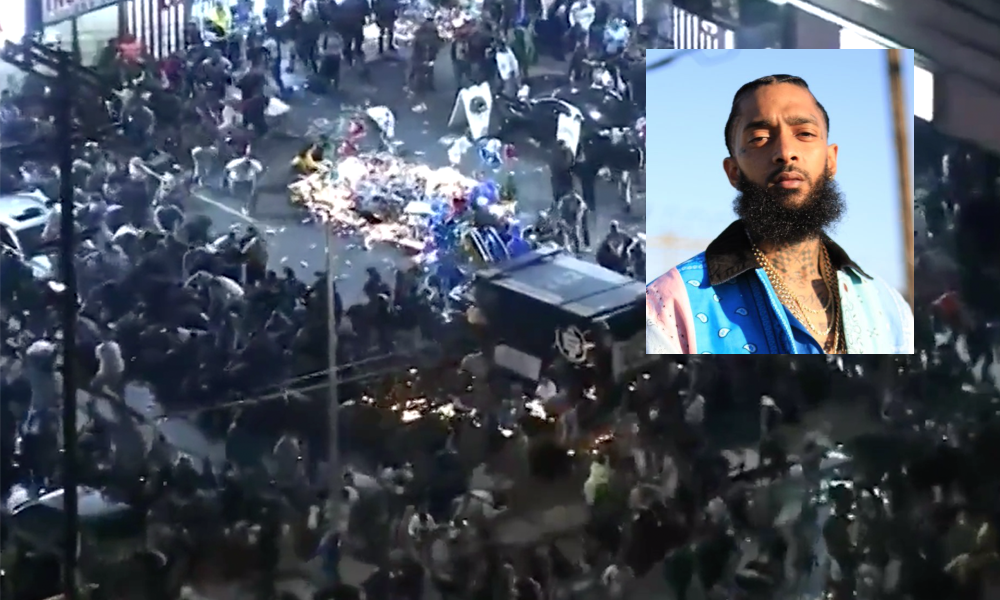 Hundreds of mourners who had gathered Monday night to remember Grammy-nominated rapper Nipsey Hussle fled the memorial in droves after inaccurate reports of shots fired in the area.

Several police officers worked to control the frightened crowd and track down more information about what had prompted the commotion, which started just after 8 p.m.

While a member of the crowd shared some words on the late rapper, dozens of people who had gathered outside Hussle’s store started running away. People fell on top of each other as they tried to flee amid the dense crowd, many of whom lost their shoes along the way.

Numerous police cars and ambulances raced to the scene as officers yelled at people to leave the area.

“Our people are on scene making every effort 2 protect everyone in attendance at the Nipsey Hussle vigil,” LAPD Chief Michel Moore said on Twitter. “Reports of shots fired at the vigil do not appear to be accurate. We do have injured in the chaos and are attempting to restore order.”

He added: “Our appreciation to those from our community actively working with members at the vigil to quell violence. Their work is vital.”

Robert Arcos, an LAPD assistant chief, told The Times that a fight appeared to have started the stampede after one person was disrespected and possibly pulled out a gun.

The Los Angeles Fire Department transported 19 people to hospitals: two people in critical condition, including one person hurt in a car accident; two people with serious injuries; and 15 with non-life threatening injuries. The majority of the patients suffered injuries related to being trampled when the crowd rushed away.

A Los Angeles Times reporter at the scene was trampled when the crowd ran. Reporters in the area said on social media that authorities had said at least six people were stabbed, which is thought to have caused or contributed to the chaos.

Hundreds of novena candles left in memory of Hussle — who was shot and killed in broad daylight outside one of his stores in South L.A. in a burst of gunfire that left two other people wounded — were crushed as people fled the area. The shards injured several people, and many were limping as they tried to find their way around police barricades. It remains unclear whether anyone was actually stabbed, or if they were wounded from broken glass.

Musician DeAndre Harvey said he was at the memorial and said it had been a peaceful event, with fans and friends passing around a megaphone and sharing stories about Hussle.

Harvey said a fight broke out, causing liquor bottles and candles to break, which caused some people in the crowd to think there was a shooting.

Panic ensued after some people started yelling, “They’re shooting,” Harvey said. Some of the people attending the memorial came from other neighborhoods and cities, and were probably nervous about coming to the area, he said.

“I don’t know who was fighting,” Harvey said. “I didn’t actually see the punches, but you just saw arms rolling and glass breaking and everybody running.”

Cal State Long Beach Professor Alex Alonso was among a group of at least 50 people boxed in by police on Crenshaw Boulevard between 59th and Slauson, trying to find a way out.

Alonso said that just as it got dark, a crowd of at least 200 people began to flee the memorial. He saw a man and a woman, both unresponsive, being carried into an ambulance.

Eric Holder is wanted for Homicide in the shooting of Nipsey Hussle. He was last seen in a 2016 white 4 door Chevy Cruze CA license plate 7RJD742. Anyone with information related to his whereabouts or this deadly shooting is urged to contact South Bureau Homicide at 323-786-5100 pic.twitter.com/3pX4fbezDs

“I didn’t hear gunshots,” he said. “I just saw everyone running for their lives.”

Emmanuel Janacua stood in the parking lot of a shuttered bank Monday night as a cacophony of police sirens and helicopters buzzing surrounded him.

A block away, red and white lights from ambulances and fire trucks illuminated a corner where the memorial for Hussle went awry.

People from all over the region descended on the South L.A. corner to pay homage, but the mourners were pushed behind yellow police tape once the commotion began.

Janacua, 32, who drove from Hollywood with his mother, said he was saddened that he could not celebrate a man who never left his community, but instead stayed to make it better.

Janacua said he didn’t listen to Hussle’s music, but seeing his towering figure at the barber shop and walking the street gave him a respect for him.

“Usually when people get famous they move to Calabasas,” he said. “A few years from now, he will be considered a legend.”

Cierra Higgins, 25, hung halfway out of the passenger window of a sedan as she shouted to bystanders, “Do you know where Nipsey’s street is?” It was beyond the yellow tape.

Higgins, who had driven from Las Vegas so her boyfriend could grieve the death of his favorite rapper with other fans, looked defeated when she discovered the street was blocked off.

They parked their car. Higgins took her boyfriend’s hand and strolled to the edge of the tape, hoping to see a piece of Hussle’s neighborhood.