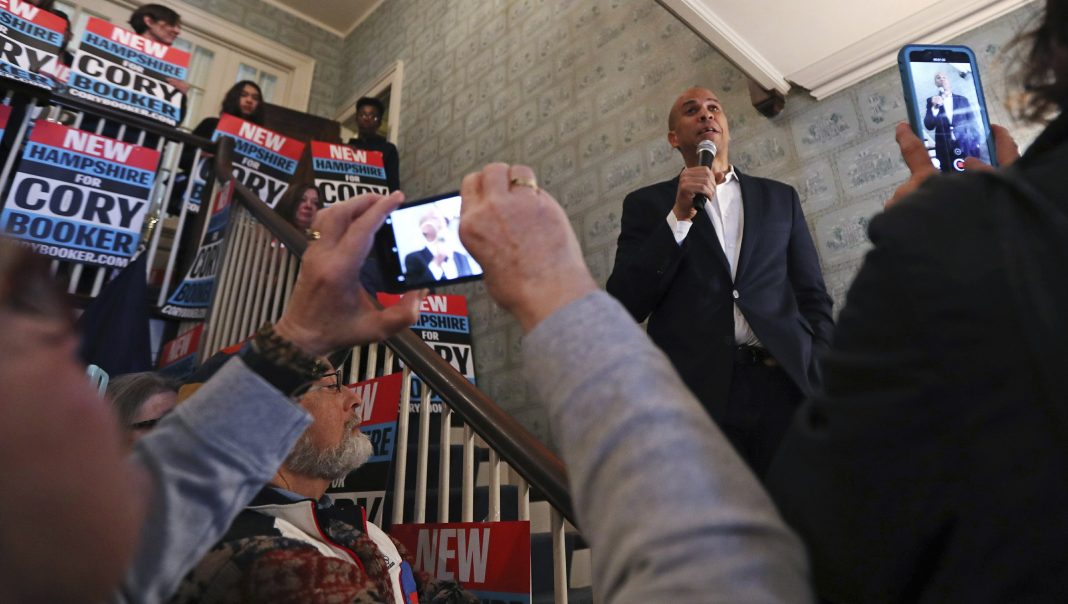 WASHINGTON (AP) — How many ways can you measure the first quarter of the year? For Democratic presidential candidates, it’s 300-plus events, 24 states and hundreds of voter questions.

The Iowa caucus is still 10 months away, but the Democratic primary campaign is already an all-out sprint — passing eye-popping markers for campaign activity and voter engagement. Voters in Florida and Ohio may not see it, but weekends in Iowa, New Hampshire, Nevada and South Carolina — not to mention a handful of select states — are a blitz of candidate rallies and local meet-and-greets.

For some candidates the frenetic pace is the message, a way of casting themselves as tireless and willing to take every last question. Elizabeth Warren and Beto O’Rourke are trying to make an ambitious schedule and accessibility part of their brands, but Cory Booker and Kirsten Gillibrand have done their parts to keep up with several dozen events each, most in early-voting states.

It’s far from clear that the candidate who holds the most events, whether leaping onto tables or addressing big rallies, will emerge as the candidate with the most votes. Still, Democrats watching the display from a distance say the engagement, the activity and the enthusiasm bode well.

The Democrats’ contested 2008 primary and the GOP’s packed 2016 field showed “that enthusiasm in primaries becomes very important in a general election,” Messina said. That’s because engaged backers are “more likely to do two things you need them to do” in order to win, he said: donate money and help persuade their social networks to vote.

For all the recent upheaval in politics, the 2020 campaign so far shows some things haven’t changed. Retail campaign stops are still essential to breaking through in early-voting states that will play a central role in choosing the nominee. They are, perhaps, even more important in the social media era. One live-streamed rally that goes viral on social media can reach more voters than dozens of smaller events.

Even though no one metric can predict success, a look at the campaigns’ tallies of on-the-ground engagement shows how some of the busiest road warriors are faring at the end of the first quarter.

Warren and O’Rourke are logging mileage in areas their party hasn’t always traveled to early on and underscoring their appetite for grassroots interaction, a style Pete Buttigieg is also cultivating. Warren took more than 200 questions from voters and O’Rourke answered more than 350, according to their campaigns’ first-quarter estimates.

That’s a notable feat for O’Rourke, who only entered the race last month. The former Texas congressman has logged 55 first-quarter events in nine states where he publicly took voter questions, according to his campaign. Gillibrand held 59 public events in eight states since launching an exploratory committee in January, according to the New York senator’s campaign. Buttigieg has held 35 events in 11 states since the South Bend, Indiana, mayor started an exploratory committee that same month.

California Sen. Kamala Harris has emerged as a top-tier contender despite fewer public events than some opponents, clocking in with 26 public first-quarter events in eight states since launching her campaign in January, according to an AP estimate. Harris’ campaign said Monday night that she took more than 100 voter questions during first-quarter events, where total estimated turnout has topped 37,000.

Warren, a former law professor whose campaign is keeping detailed statistics, took questions at 48 events in 12 states over all three months, according to the Massachusetts senator’s campaign. Her aides measure her commitment to voter engagement partly in selfies — estimating that she’s taken more than 12,000 with voters so far. The tally of extra time after events is itself a strategic move, an argument that availability can win the day while other candidates spend time on the high-dollar fundraisers she’s sworn off.

Other Democrats are consciously mixing up their number and types of public events. Booker is holding a bigger kickoff of a national tour soon after holding smaller events. The New Jersey senator’s campaign estimates that he has held more than 50 public events in seven states since he jumped into the race in February.

A handful of other candidates have lagged behind in their total number of first-quarter events. Minnesota Sen. Amy Klobuchar logged 18 events in nine states since forming her campaign in February, according to an AP tally, with former Colorado Gov. John Hickenlooper and Washington Gov. Jay Inslee each holding 12 events. Former housing secretary Julian Castro has held more than a dozen of his own over the first quarter.

All of these candidates tend to fall behind Bernie Sanders in early polling of the Democratic field. Sanders, the runner-up in 2016, has held 17 major events in eight states and Washington, D.C., since declaring his candidacy in early March.

Not all of Sanders’ events — nor those of other candidates — feature the sort of real-time voter questions that are a fixture of Warren’s and O’Rourke’s appearances. But Sanders’ crowds illustrate his formidable ability to engage voters on his own terms: The Vermont senator’s campaign projects a total turnout of 74,000 people for all of his events so far.

President Donald Trump famously upended the traditional calculus of campaigning in 2016 by making fewer retail visits as he powered past more than a dozen GOP rivals. Whether anyone in the Democratic field can repeat that model remains to be seen.

“We want to fall in love like we did with Barack Obama,” Messina said of Democratic voters, “and to do that, you need to do the retail part of this.”

Several candidates have made a point of veering off the beaten track, hoping a stop outside the early states will earn them some extra media attention and voter good will.

O’Rourke crossed six states in one week on his post-announcement road trip. Warren has made unexpected trips to Puerto Rico and the Deep South, eager to find a way to set herself apart from the pack.

When the Massachusetts senator touted her “not traditional” choice to visit Alabama during a rally there last month, a voice from the audience chimed in to note that “Obama did it.”

Man who hung off side of Trump Tower Chicago for 14...