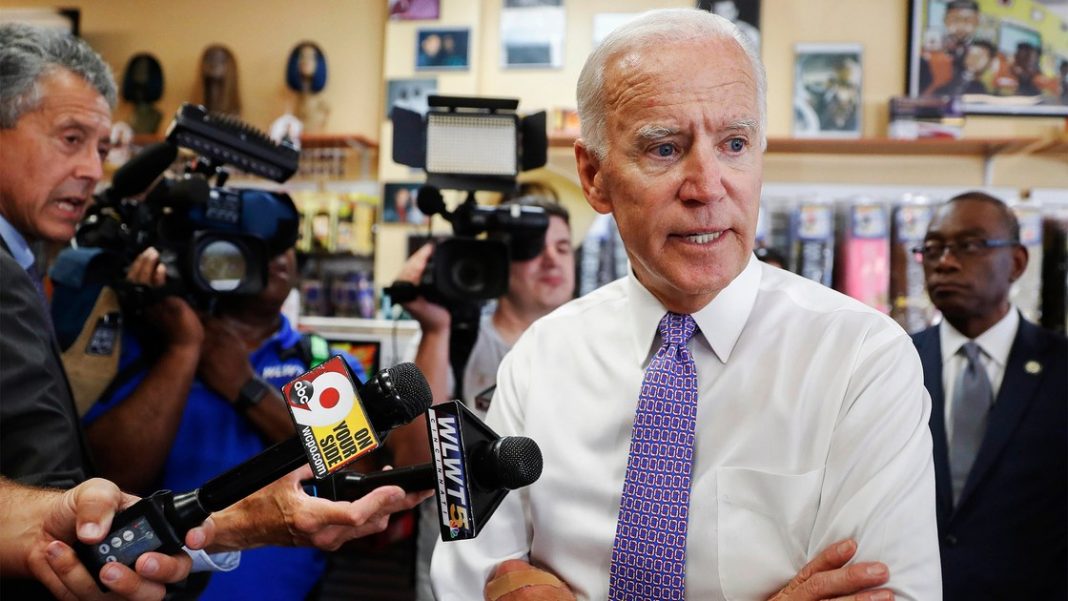 When Lucy Flores published an essay last Friday accusing Joe Biden of invading her personal space (and, weirdly, smelling her hair), the former vice president and presumptive 2020 frontrunner quickly responded with a delicately-worded statement. “I may not recall these moments the same way, and I may be surprised at what I hear,” he admitted. The language choice seemed deliberate, given the extensive documentation of Biden’s uniquely tactile brand of retail politics. It was also prescient: on Monday, another woman, former Democratic aide Amy Lappos, came forward with her own Biden story. “He put his hand around my neck and pulled me in to rub noses with me,” she told the Hartford Courant, recounting their meeting at a 2009 fundraiser. “When he was pulling me in, I thought he was going to kiss me on the mouth.”

Just as Lappos went public, so too did a wave of high-profile Biden defenders. “There’s a lot of things I know about Joe Biden—I’ve known him for a long time—he is extremely affectionate, extremely flirtatious in a completely safe way,” Morning Joe host Mika Brzezinski said Monday, suggesting it would be easy for someone to “misconstrue” Biden’s famously intimate touching. “But as much as I can know what’s in anyone’s heart, I don’t think there is bad intent on his part at all.” (Lappos herself said she felt Biden’s violation of her personal space “wasn’t sexual,” but sexist.) Former Senator Dick Durbin said the Flores allegation was “not disqualifying, but it should be taken seriously.” Former senator Carol Moseley Braun, who called Biden “a man who spent his life being nice to people,” was less politic. “What else are you supposed to do?” she said on CNN when asked whether Biden’s apology was sufficient. “‘Lucy, I’m sorry, I got too close to you?’”

On Monday, Biden spokesman Bill Russo e-mailed reporters a more aggressive defense of the former senator’s behavior, condemning the “cottage industry of lies” aimed at ruining Biden’s reputation. “These smears and forgeries have existed in the dark recesses of the internet for a while,” he said. “And to this day, right wing trolls and others continue to exploit them for their own gain.”

Despite a broader move on the left to “believe all women,” Democrats appear to be circling the wagons, for now. The hosts of The View devoted an entire segment to dissecting whether Biden’s transgressions constituted a true “Me Too moment,” with Whoopi Goldberg concluding that the Flores story was being mischaracterized. Washington Post columnist Jonathan Capehart pointed out that Biden’s gropiness has not been limited to women (“He put his forehead on my forehead . . . It was his way of congratulating me”), while Stephanie Carter, the wife of former defense secretary Ash Carter, came forward to refute that Biden had groped her in an infamous photo from her husband’s investiture ceremony. On MSNBC on Monday morning, Brzezinski asked of Democrats, “what exactly is . . . the ‘Me Too’ line you want to draw?” The answer, it seems, is one that leaves Biden untouched.

Some Biden defenders have gone further, casting aspersions on Flores’s motivations. “If you don’t smell a gigantic rat with this Lucy Flores interview I can’t help you,” Republican strategist Rick Wilson wrote on Twitter after Flores appeared on CNN over the weekend. “As somebody who’s done a hell of a lot of media training I can tell when somebody’s been [prepped] for an interview to within an inch of their life.” Others pointed to Flores’s past affinity for Bernie Sanders. She endorsed Sanders’s candidacy in the 2016 Democratic primary, and later became a board member for the Sanders-inspired “Our Revolution,” a position she no longer holds. (“I just hope it’s not true that Flores was prompted to write her essay because of her work with Bernie campaign,” tweeted Randi Weingarten, president of the American Federation of Teachers labor union, before deleting it.) Flores herself addressed the chatter online over the weekend. “To set the record straight, I haven’t endorsed any presidential candidate including Sanders,” she tweeted. “But even if I had endorsed someone, that doesn’t erase the multiple pictures, articles & the well known ‘open secret’ [about] Biden’s inappropriate behavior. This [should] been addressed long ago.”

A few potential 2020 rivals took a tougher line. Elizabeth Warren and Julian Castro both said “I believe Lucy Flores,” and suggested Biden should answer for his conduct. (Amy Klobuchar said, somewhat lamely, that she hadn’t read the Flores story but has “no reason not to believe her.”) Several others offered vague responses about the importance of treating women with dignity, but not a single Democratic presidential candidate was willing to say that Biden should be disqualified from the race. Even Sanders, who would have the most to gain from Biden’s exit, as the No. 2 candidate in early polling, said Sunday that while he believed Flores had been made to feel uncomfortable, he couldn’t say whether “that one incident alone disqualifies anybody.”

So Biden survives, for now. But his non-campaign campaign has surely been rattled. His political future, and his viability as a presidential candidate, will depend on where Democrats draw the line in the #MeToo age. After all, Biden’s tendency to invade the personal space of everyone from the wives of lawmakers to constituents to Hillary Clinton herself has long been an open secret. At present, Biden’s defenders are louder than his accusers, forestalling the pile-on effect that pushed out former power players like Al Franken, John Conyers, and, arguably, Bill Clinton, from the party’s graces. But four decades of uncomfortable behavior threaten to damage Biden’s nascent campaign. If he does declare his candidacy after months of dragging his feet, he will already be on the defensive.

— Why is Trump obsessed with Beto O’Rourke?

— The self-driving techpocalypse: the Boeing tragedy is just the beginning

— Inside the Disney-Fox Freakout

— Beto vs. Biden: who is Obama’s true heir apparent?

— Cover story: Riding around with Beto O’Rourke as he comes to grips with a presidential run

Looking for more? Sign up for our daily Hive newsletter and never miss a story.