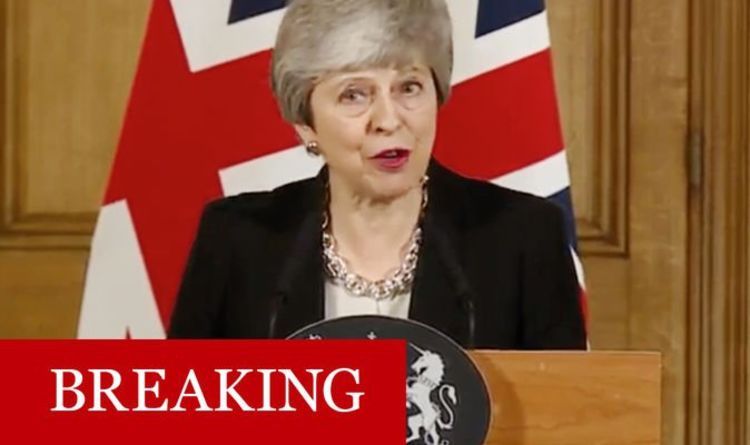 In a statement from Downing Street following a marathon Cabinet meeting in Westminster today, the Prime Minister also said she will meet with Labour leader Jeremy Corbyn to try and come up with a plan they can both agree on. Mrs May maintained the UK could make a “success” of a no deal Brexit but leaving with the EU is still the “best solution”. She added the extension to Article 50 should be “as short as possible”.

The Prime Minister added a bill to pave the way for the departure form the EU would have to be in place by May 22 to ensure the UK does not have to take part in European Parliament elections the following day.

Mrs May said: “I have always been clear that we could make a success of no-deal in the long term but leaving with a deal is the best solution.

“So we will need a further extension of Article 50 – one that is as short as possible and which ends when we pass a deal.

“And we need to be clear what such an extension is for: to ensure we leave in a timely and orderly way.

“This debate, this division, cannot drag on much longer.”

The Prime Minister revealed she will also try to break the “logjam” by striking a compromise with Mr Corbyn.

But she also warned this would have to include her current Brexit deal.

Mrs May said: “I’m offering to sit down with the leader of the opposition and try to agree a plan that we would both stick to to ensure we leave the EU and we do so with a deal.

“Any plan would have to agree the current Withdrawal Agreement – it has already been negotiated with the 27 other members and the EU has repeatedly said it cannot and will not be re-opened.”

She added if they cannot agree on a unified approach, the party leaders will instead agree on a number of options for the future relationship with the EU to put before MPs in a series of votes.

The Prime Minister added: “The ideal outcome of this process would be to agree an approach on a future relationship that delivers on the result of the referendum, that both the leader of the Opposition and I could put to the House for approval and which I could then take to next week’s European Council.

“However, if we cannot agree on the single unified approach, then we would instead agree a number of options for the future relationship that we could put to the House in a series of votes to determine which course to pursue.

“Crucially, the Government stands ready to abide by the decision of the House. But to make this process work, the opposition would need to agree to this too.”

But Mrs May’s statement has been met with fury and frustration, with former Ukip leader Nigel Farage accusing her of leading the UK “even deeper into crisis”.

“My view is what we got from that statement was yet more fudge.

“So, basically, whatever happens in the future depends on Labour to a very large extent, the House of Commons has to agree, we must pass the withdrawal agreement, it must all be done by the 22nd May because otherwise, people like that nasty Farage might stand in the European elections.

“And I am basically going to accept that in the future political declaration we may stay part of the customs union forever.

“My take on that is that that statement from the Prime Minister probably takes us no further forward whatsoever and maybe leads us even deeper into crisis.”