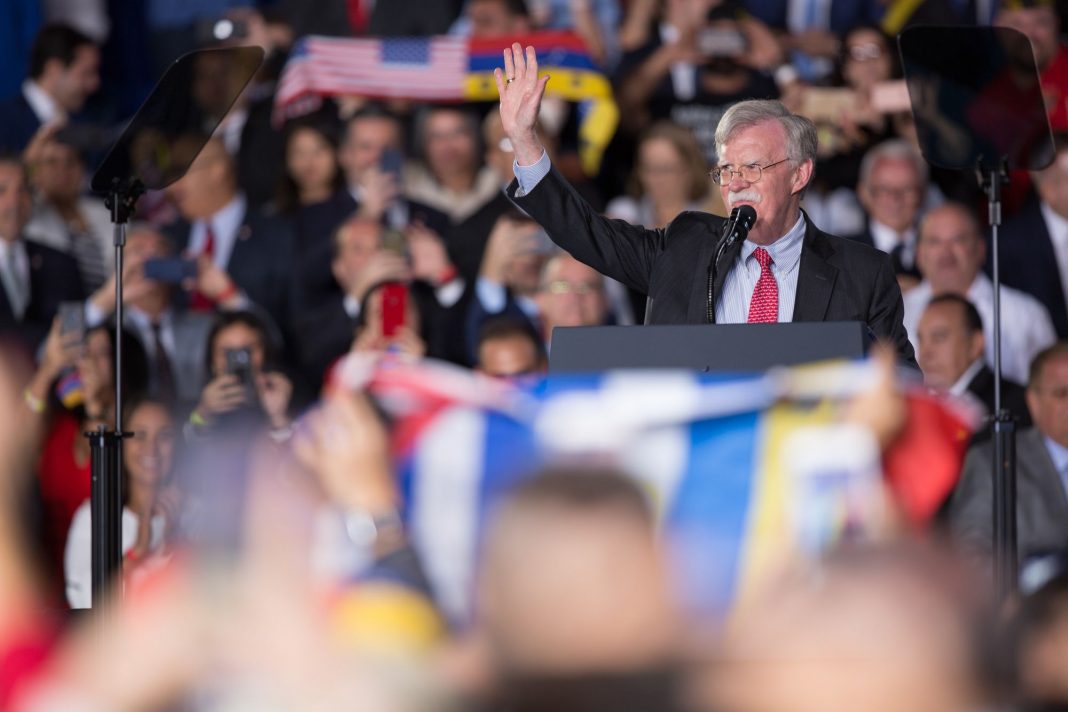 (Bloomberg) — White House National Security Adviser John Bolton is expanding his influence in increasingly visible ways, pursuing his own longstanding foreign policy priorities at the risk of tensions with top administration officials — and even Donald Trump himself.

An example spilled into the public eye a week ago, when an irked Trump cryptically announced on Twitter he’d undo some North Korea-related sanctions blessed by Bolton. The president’s decision was quietly walked back and the sanctions remain in place.

Since joining Trump’s White House, Bolton has pursued an agenda that includes trying to break Iran financially, oust Venezuelan President Nicolas Maduro, shield Americans from the reach of the International Criminal Court and toughen the U.S. posture toward Russia. He coordinated with key lawmakers, U.S. diplomatic and defense officials and the Israelis to compel Trump to slow an abrupt withdrawal of American forces from Syria.

Bolton, 70, has meanwhile adopted an increasingly public profile on Twitter, Trump’s social media platform of choice. Through a spokesman, he declined to be interviewed for this article.

This story is based on interviews with lawmakers and several current and former White House and diplomatic officials, most of whom asked not to be identified in order to candidly discuss Trump’s third national security adviser.

Bolton’s blunt, unapologetic divide-and-conquer methods don’t surprise anyone who’s watched him in government roles since the Reagan administration or as a pundit on Fox News. He’s always been a deeply ideological thinker who believes the U.S. plays by a unique set of rules and doesn’t mind — or even sometimes relishes — clashing with others to accomplish his goals.

He’s beloved by a loyal cadre of aides while chafing many others inside the administration. Trump is aware that Bolton’s relationships with powerful Republican figures who influence the president, particularly billionaire casino mogul Sheldon Adelson and his wife Miriam, give him an added degree of political cover, according to two people familiar with the matter.

Trump is notorious for abruptly casting out aides whenever he tires of tangling with them, but he has not yet sent any signals that Bolton’s gone too far. But one senior aide to the president offered an ominous warning about Bolton’s approach, saying he risks the president’s ire by “stepping a little too far out into the sunshine.”

Trump and Bolton, whom the president sometimes calls “the Mustache” because of his trademark facial hair, are often on the same page on policy. There’s little daylight between their positions on issues such as Iran, Venezuela and the ICC, for example, and Bolton helped push Trump to formally recognize Israeli sovereignty over the Golan Heights.

Bolton “is working across government to coordinate and implement the president’s national security agenda,” spokesman Garrett Marquis said in a statement.

But when they disagree, Bolton’s strategy can unfold in one of two ways.

He sometimes moderates Trump, as he did on Syria — a role that has had the unlikely effect of endearing him to some Democrats on Capitol Hill who otherwise disdain his unilateral, hawkish approach to the world. Many lawmakers of both parties also say Bolton is forthright and pleasant to work with, whatever their disagreements.

“At times, I’ve felt that he had a very positive impact on the president in making a decision,” Senator Ben Cardin, a Maryland Democrat, said in an interview — while emphasizing that he disagrees with his point of view. “I think Mr. Bolton has an impact, I really do. It’s a moderating impact. But he’s not a moderate.”

Senator Lindsey Graham, a South Carolina Republican, said Bolton “brings a lot to the table for the president.”

But Bolton also can bait Trump’s break-glass instincts, as is the case in a debate over issuing waivers from U.S. sanctions for some countries to continue importing Iranian oil.

Bolton opposes any waivers in order to crush the Iranian economy. The State Department, on the other hand, is concerned about the diplomatic consequences if allies are forbidden from buying Tehran’s crude. Trump has sought information about the effect on oil prices before making a decision.

Bolton has a reputation as a war-monger, after encouraging President George W. Bush’s invasion of Iraq over weapons of mass destruction that didn’t exist. But U.S. officials and foreign diplomats believe Bolton’s most hawkish instincts may be checked by his understanding that Trump campaigned to pull the U.S. out of overseas conflicts.

Graham, a Trump ally, said he worked closely with Bolton to reshape Trump’s exit from Syria.

“The moment I heard we were pulling out, I called Bolton. I said, ‘What the hell is going on here? This is a disaster,”’ Graham said in an interview. He and Bolton then worked together to discuss with Trump how they could achieve his goal of withdrawing U.S. forces while protecting Kurdish allies and preventing a resurgence of the Islamic State.

Trump’s feelings about Bolton aren’t as warm as those for Secretary of State Michael Pompeo, a sometime Bolton rival. Bolton comes from the Republican establishment Trump ran over on his way to the White House, and the president passed over the former UN ambassador twice for national security adviser before choosing him to replace H.R. McMaster.

Another potential flashpoint between Bolton and Pompeo is Afghanistan, where the U.S. special envoy, Zamay Khalilzad, is under orders from Trump and the Secretary of State to negotiate a peace deal with the Taliban.

Bolton and the Pentagon are concerned about the talks, people familiar with the matter said.

But Pompeo has directed Khalilzad to communicate with him — not Bolton — according to two people familiar with the matter.

State Department spokesman Robert Palladino said in a statement: “Ambassador Khalilzad reports to, and therefore communicates directly with, Secretary Pompeo, who is working to implement — precisely — the president’s policy.”

Trump genuinely doesn’t like Bolton’s mustache. At the National Christmas Tree lighting, on a particularly frigid and windy night in November, Trump cracked that if Bolton were there, they could use “the Mustache” for warmth. People with him laughed, though they weren’t sure if he meant burn the mustache like a log or hide under it like a fur coat.

But Trump appreciates Bolton’s knowledge, skill and network and shares much of his thinking about the importance of the U.S. projecting strength, the people said.

One diplomatic official said Bolton has long desired to be national security adviser and that there’s a general perception he’s willing to put up with a lot to keep the job. In Trump, the official said, Bolton appears to have found a president more willing than his predecessors to openly question the international alliances Bolton has long distrusted and criticized, such as the European Union or NATO, and to advance Israel’s interests.

Bolton has also pursued tougher policies toward Russia and supports another round of sanctions aimed at punishing the Kremlin for a 2018 nerve-agent attack on a former Russian spy in the U.K.

Before he came to work for Trump, Bolton had publicly advocated for a military strike on North Korea’s nuclear facilities, and he’s made no secret of his discomfort with preemptive U.S. concessions to Kim Jong Un’s regime.

The president had given Treasury discretion to decide some sanctions as it saw fit. And in the scheme of sanctions policy, the penalties on the shipping companies were modest — a signal to other countries that the U.S. was watching for attempts to help Pyongyang evade international pressure to give up its nuclear weapons program.

A top aide to Acting White House Chief of Staff Mick Mulvaney warned Bolton privately before the sanctions on the two Chinese companies were issued that Trump might not support them. Bolton dismissed the concern. Indeed, Trump was angry when he learned about the sanctions, the day after they were issued, and responded in his singular way: a tweet announcing that “additional large scale” North Korea sanctions would be withdrawn.

The administration scrambled to quash the outcry by lawmakers and the foreign policy community over the turmoil that would result if U.S. sanctions policy was rendered so fickle as to be changed by tweet. A statement issued hours later suggested that Trump had been referring to future North Korea sanctions.

But there were no new North Korea sanctions underway, according to five people familiar with the matter. The controversy was eclipsed within hours, when Special Counsel Robert Mueller delivered his report on the Russia investigation to the attorney general.

To contact the editors responsible for this story: Alex Wayne at awayne3@bloomberg.net, Joshua Gallu