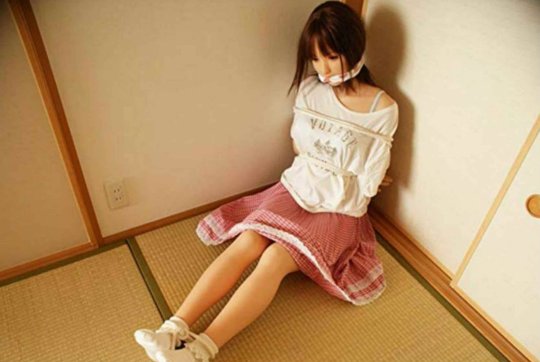 A ‘nauseating sex doll’ of a young woman bound and gagged has been pulled from Amazon’s website amid outrage from customers.

The online shopping giant has been forced to remove the doll, priced at £61, from the site, following a complaint from a London woman who claimed it was being sold for ‘male sexual abuse’.

Images show the ‘adult toy’ sitting in a corner, dressed in a childlike pink skirt and white top, with its hands tied and ankles tied-up and a gag over its mouth.

The doll was described as ‘safe and easy to clean’ and customers were advised not to ‘worry about twisting or tearing’ as it can ‘withstand 380 pounds of pressure’.

It was also described as ‘very flexible’, with a ‘variety of movements or postures that subtly match all your interests’.

The complainer from London, who wished to remain anonymous, told Amazon on social media they were selling ‘a sex doll of a child, tied at her ankles, wrists, chest and gagged’.

‘A child, depicted as helpless and terrified in a corner. Sold for male sexual (ab)use,’ she said.

She continued: ‘The doll is fitted with fully usable, realistic hairless sex organs and the company is proud that it can withstand the weight of men weighing up to 380 lbs.

Thunder and hail on the way across entire country

‘I am shocked to my core that Amazon is selling this. No “report” button, either!It pains me so much that we, as a society, are allowing this sort of thing to be sold at all.

‘It appals me even more that they are sold so openly on a popular, family-friendly site such as Amazon, because that normalises the mentality that demands, creates, sells and buys such utterly nauseating products.’

The product description outlines the specific details of the doll, including ‘medical non-toxic super soft silicone’, ‘feels real’ and ‘like leather without odour, safe and easy to clean’.

One social media user wrote: ‘That is disgusting. I can understand sex dolls, but tied up like that resembling an underage girl. Wow. I’m lost for words.’

Another commented: ‘If you search Amazon for ‘adult dolls for men’ you will find 3000 gross items.

‘I’m calling and complaining daily. The complaint can be expedited to manager by request. Everyone take a few minutes to let Amazon know why this is wrong.’

But one woman seemed to support the sale of the doll.

She wrote: ‘You guys are all incapable of reading. The doll is 5’5″. This doll has breasts. This is not a child but a woman.

‘Japanese people are often into “Shibari”. Yes, that’s tying someone up in beautiful knots. Yes. That’s consensual. It might double as a sextoy too.’

Last year, the retail giants were slammed by campaigners for selling sex dolls which appeared to look like children.

Campaigners complained about the £65 doll which was described as having the largest ‘sweet and soft nipples.’

An Amazon spokesman said: ‘Sellers who don’t follow guidelines can have accounts removed. These products are no longer available.’