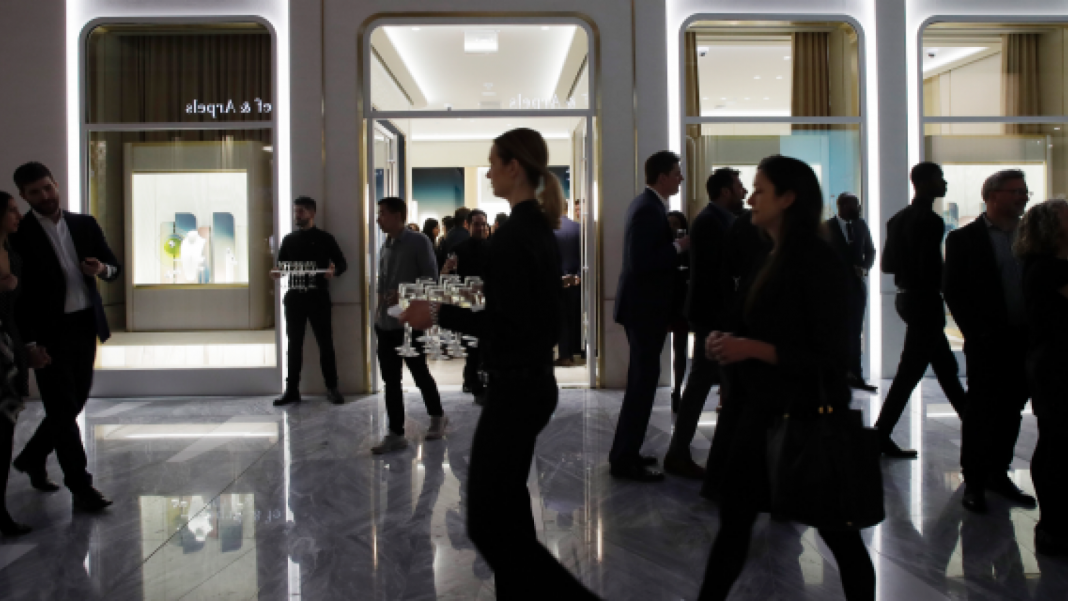 FILE- In this March 14, 2019, file photo people attend the opening of a Piaget store during the opening night of The Shops &amp; Restaurants at Hudson Yards in New York. On Monday, April 1, the Commerce Department releases U.S. retail sales data for February. (AP Photo/Mark Lennihan, File)

WASHINGTON – U.S. retail sales fell in February, as consumers pulled back their spending on building materials, groceries, furniture, electronics and clothing amid signs of a slowing economy.

The Commerce Department said Monday that retail sales fell 0.2 percent in February, after posting an upwardly revised gain 0.7 percent in January. Still, sales are running below their seasonally adjusted levels from November after a sharp 1.6 percent decline in December.

Over the past year, retail sales have roughly kept pace with inflation by increasing a slight 2.2 percent.

The recent dip in consumer spending suggests that more Americans are tightening their belts amid slowing global growth and waning effects of President Donald Trump’s tax cuts at the end of 2017. Roughly 70 percent of all economic activity comes from consumers, so a slump in retail sales could have a ripple effect. The end of the government shutdown on January 25 failed to boost spending much, and the initial round of tax data for February showed taxpayers were receiving lower average refunds than in 2018.

“A couple of special factors — snowstorms and less income tax refunds — may have weighed on spending, though it’s disappointing that consumers did not extend January’s rebound despite the end of the government shutdown,” said Sal Guatieri, senior economist at BMO Capital Markets.

Still, auto sales rebounded slightly in February after a sharp drop in January. And non-store retailers, a category that includes online shopping, enjoyed gains of 0.9 percent in February and 10 percent in the past year.

Thankfully, Pelosi Has Teed Up a Lot of Great Legislation

Thankfully, Pelosi Has Teed Up a Lot of Great Legislation

We Don’t Know if Legally Joe Biden Could Stay in Office...

Mail delays even worse across Pa., with 42% of Philly mail...