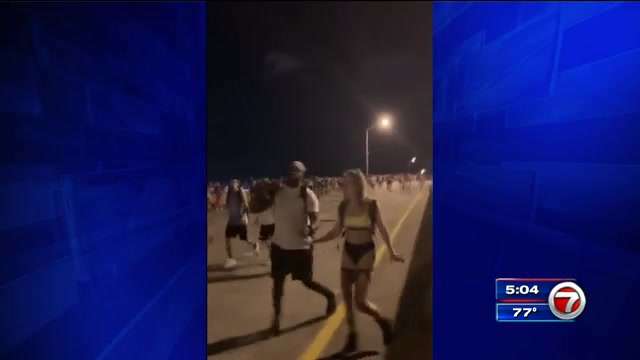 Revelers on Saturday enjoyed the pulsating beats of some of the world’s most renowned electronic music DJs at the festival’s new Virginia Key location.

But when asked whether the event was flowing smoothly, their answer was loud and clear: no.

The logistics issues irking party goers Saturday night involved delays in getting to Ultra on buses that picked them up at various spots in Miami.

When asked how long it took her to arrive at the event, a woman said, “At least three hours, yeah. I mean, we wanted to just leave and get to this festival, and we missed half of the festival tonight.”

Another reveler said traffic along the Rickenbacker Causeway was to blame for the delays.

“We’re all stuck in traffic with all the other cars coming here,” he said. “It took us, what? We caught the bus at 6 o’clock, and it’s almost 8.”

Attendees on the the first night of Ultra faced a different problem that set social media abuzz with posts from frustrated and dissatisfied festival goers.

People wanted to go home were left with no means of returning to their cars.

Viral videos showed thousands of people on the causeway walking, and in some cases running toward the mainland.

Last night, many of you experienced challenging transportation conditions leaving the festival. This is unacceptable and inconsistent with the high standards you have come to expect from us. For this, we are sorry.

Revelers on Saturday were still complaining about the bus route botching.

“I thought this was so poorly planned out,” said a woman.

Cellphone video also captured a brush fire at the venue, Friday night. No one was hurt, but the flames unsettled some revelers.

At a news conference Saturday, Ultra’s director of security addressed the logistical hiccup.

Organizers had said there would be buses to take revelers back at the end of the first night’s festivities, but that became a challenge when all of the buses needed to accommodate the masses were not at the venue.

“There’s no buses, bruh,” a man is heard saying in a cellphone video.

“Crowds actually started leaving a little earlier than we were anticipating and did not have the buses ready and prepared, lined up to leave,” said Martinez.

The shortage of wheels led to large crowds walking across the causeway in the wee hours of the morning.

Organizers had acknowledged the nature of their new location, from where there is only one way in and one way out, with limited Uber and Lyft services, presented a massive challenge.

“We recognize that we have to make adjustments,” said Martinez.

Organizers said 200 buses would be stationed outside the Miami Marine Stadium venue starting at 9:30 p.m. on Saturday, and there would be designated lanes for buses only.

Ultra organizers released a statement following Saturday morning’s debacle. It reads in part, “This is unacceptable and inconsistent with the high standards you have come to expect from us. For this, we are sorry. We look forward to offering you a significantly improved transportation experience today and throughout the weekend, and we appreciate the opportunity to earn back your confidence and trust.”

“What I actually saw was that there’s a tremendous effort coordinating,” he said. “We have for the first time what is similar to an emergency operations center where we have … a tremendous amount of cross-jurisdictional collaboration from federal, state and local partners.”

According to Suarez’s office, City of Miami Police have tallied 18 Ultra-related arrests so far.

7News cameras captured Miami-Dade Police officers taking an Uber driver into custody after he allegedly made an illegal drop-off and then mouthed off to officers.

Suarez also said he has asked Ultra organizers to turn down the bass after complaints came in from residents in Brickell and other areas.

“I got about three or four emails relative to the bass, so the event organizers, on a couple of occasions when I received those complaints, [I told them], ‘Reduce the bass, and that seemed to solve the problem,’” he said.

There were more than 100 calls made for medical issues on Friday night, according to Ultra security.

Police have not yet provided updated arrest numbers for Saturday.

Copyright 2018 Sunbeam Television Corp. All rights reserved. This material may not be published, broadcast, rewritten or redistributed.