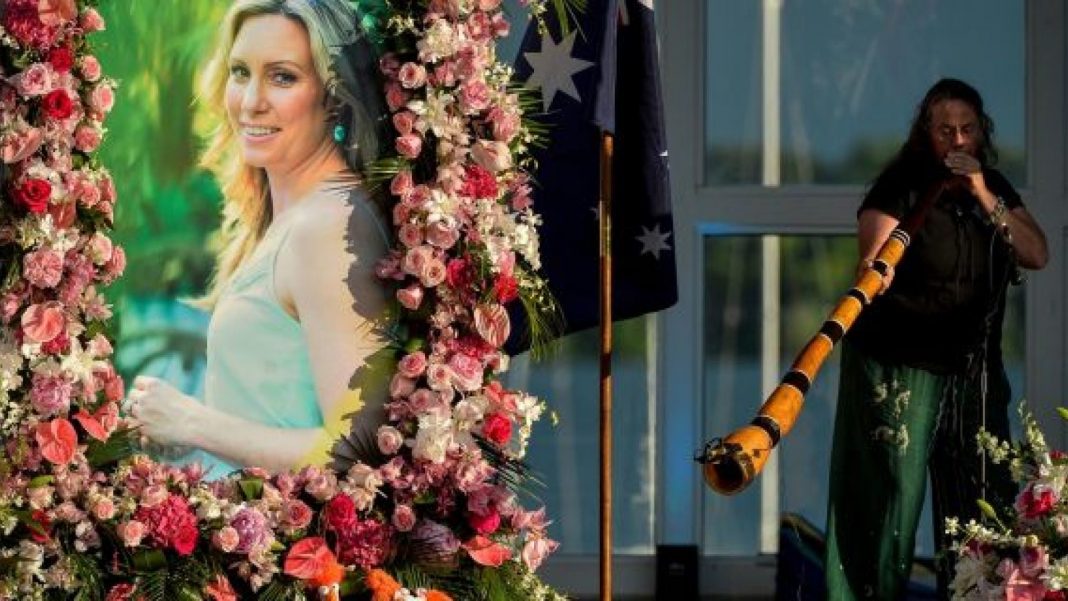 FILE – In this Aug. 11, 2017, file photo, Johanna Morrow plays the didgeridoo during a memorial service for Justine Ruszczyk Damond at Lake Harriet in Minneapolis. Jury selection is scheduled to begin, Monday, April 1, 2019, in the trial of a former Minneapolis police officer who fatally shot the unarmed Australian woman after she called 911 to report a possible sexual assault behind her home. Mohamed Noor is charged with murder in the July 2017 death of Damond – a case that drew international attention and led to changes at the city’s police department. He has pleaded not guilty. (Aaron Lavinsky/Star Tribune via AP, File)

MINNEAPOLIS – The Latest on the trial of a Minneapolis police officer who fatally shot an unarmed Australian woman in 2017 (all times local):

A group of Justine Ruszczyk Damond’s neighbors and friends say they’re glad the Minneapolis officer who killed her is being prosecuted.

But members of Justice for Justine said Monday they also wonder if Mohamed Noor is being prosecuted because he’s Somali American and his victim was white.

Noor shot Damond in July 2017 after she called 911 about a possible crime behind her home. His trial began Monday with jury selection.

It’s rare for police officers to be charged in on-duty shootings. Alana Ramadan says she feels Noor is being used as a “sacrificial lamb” because he’s a minority.

Noor’s trial is being held in one of the smallest courtrooms. Group members took issue with restricted public access and called on the judge to move the case to a larger venue and allow all evidence to be shown in court.

The judge hearing the trial of a Minneapolis police officer charged in the shooting death of an unarmed Australian woman says threatening phone calls have been made to her chambers.

Mohamed Noor is going on trial this week in the July 2017 death of Justine Ruszczyk Damond. Noor shot her when she approached his squad car just minutes after she called 911 to report a possible sexual assault in the alley behind her home.

Judge Kathryn Quaintance says the threatening phone calls came after she made rulings on what evidence may be presented at trial. Quaintance cited passionate public opinion about the case Monday in explaining why jurors won’t be identified in court.

Jury selection began Monday for Noor. He was fired from the force after being charged with murder and manslaughter.

A former Minneapolis police officer going to trial in the fatal 2017 shooting of an unarmed Australian woman had nothing to say to reporters as he entered a Minneapolis courthouse.

Mohamed Noor said nothing as reporters asked him whether he would testify at his trial, which began Monday with jury selection.

Noor faces murder and manslaughter charges in the death of Justine Ruszczyk Damond. She had called 911 in July 2017 to report a possible sexual assault in the alley behind her home. Noor and another officer responded. Noor shot Damond after she approached the officers’ squad car.

Noor was fired after he was charged in Damond’s death. The judge has set aside several weeks for his trial.

Jury selection is scheduled to begin in the trial of a former Minneapolis police officer who fatally shot an unarmed Australian woman after she called 911 to report a possible sexual assault behind her home.

Prosecutors must prove Noor acted unreasonably when he shot Damond. The defense plans to argue that he used reasonable force in the situation and acted in self-defense.

Noor refused to speak to investigators about what happened. His attorneys haven’t said whether he’ll testify at the trial, which is expected to last weeks.