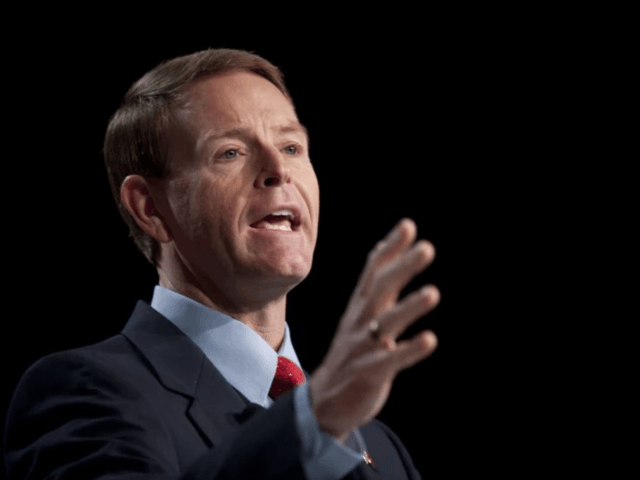 Tony Perkins, president of the Family Research Council and commissioner with the United States Commission on International Religious Freedom (USCIRF), questioned in an essay the pink and blue flags representing transgenderism hanging outside of House members’ offices, asking whether lawmakers support our troops or prefer promoting sexual political correctness in the U.S. military.

“It’s a jarring sight on the 5th floor of the Longworth House Office Building,” Perkins wrote in his Washington Update column late last week. “A sea of baby blue and pink flags greets everyone who walks by — an unpleasant reminder of just where the new majority’s priorities are. Not that anyone really needed reminding. Late yesterday, Speaker Nancy Pelosi’s (D-Calif.) party made it quite clear what they thought about our service members by condemning a policy that saves our military from deadly distractions. But in the left’s hierarchy of political priorities, keeping the troops safe has always fallen way below keeping them ‘tolerant.’”

“What they didn’t account for, in all of their radical scheming, was a leader who would do something about it,” Perkins wrote. “But after one look at the $3.7 billion price tag, the social science, the cost to readiness, and the Army slides on ‘male pregnancy’ and ‘off-duty drag,’ Donald Trump had seen enough. He pulled the plug.”

The left and Democrats in Congress, however, have made it clear, Perkins said: they are on the side of transgender activism.

The Trump administration was sued over the policy, and the United States Supreme Court ruled in favor of the president, although the issue is still playing out in lower courts.

And last week Rep. Joe Kennedy III (D-MA) held a press conference at the Capitol to announce the House had passed a “bi-partisan” resolution rebuking Trump’s policy. Rep. Jennifer Wexton (D-VA), a freshman, said at the press conference that she was the first to hang a transgender flag outside of her office — the start of a trend.

“When I was sworn in less than three months ago I was the only member of Congress to hang a transgender flag outside of my office,” Wexton said.

“It attracted some attention,” Wexton said. “But I would suggest that all of you go over to any of the office buildings across the street after this press conference and you will see scores of the same flag hanging outside of members’ offices proudly.”

“And I hung the flag not just because this community is under attack from the current administration but because the transgender community are my family and my friends,” said Wexton, who has told reporters she is an aunt to a transgender child.

“In another sign of just how fanatical the left has become, every single Democrat went against the service chiefs’ advice, the Pentagon’s research, and the men and women in uniform to make a party statement: We put transgender extremism first,” Perkins wrote.

And that the new policy originated with the military, according to Rep. Mac Thornberry (R-TX), Perkins pointed out.

“Well before any presidential tweet,” Thornberry said, “Secretary of Defense Mattis had put a delay on implementation of the policy that had previously been announced so that there could be a six-month review. I recommend that members actually read it… They’ll see the serious and thoughtful approach that the department took to this issue.”

“He’s right,” Perkins wrote. “After digging into the science, Mattis and his team were more convinced than ever that letting this type of gender chaos into the military presents a ‘considerable risk’ to its ‘effectiveness and lethality.’”

Perkins also explained that the so-called “ban” on transgender service members is not that at all.

“This has never been a ban on qualified men and women,” Perkins wrote. “If a recruit passes the tests and hasn’t been formally diagnosed with gender dysphoria, they’re free to join — so long as they serve as their biological sex.”

“Political correctness doesn’t win wars — and it’s time we put an end to policies that pretend it does,” Perkins concluded.