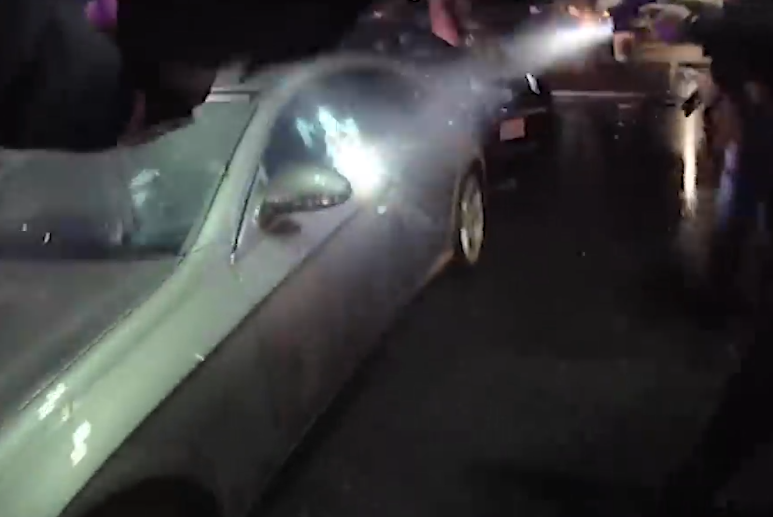 In the minutes before Vallejo police officers fatally shot an unresponsive man in a Taco Bell drive-thru lane last month, they talked about opening his car door, grabbing the gun in his lap and dragging him out of the car, police body-cam footage released Friday shows.

But the door was locked.

As the officers’ body cameras rolled, the sleeping man, 21-year-old Willie McCoy, began to move. He used his right hand to scratch near his left shoulder, then bent forward and moved his left arm toward his lap. That’s when officers opened fire through the window with a barrage of bullets, video shows.

The controversial Feb. 9 shooting — documented by multiple officers’ body cameras — has garnered widespread attention following reports that McCoy was unconscious and armed while his car remained operational in the drive-thru lane. But in a rare move, the department released not only raw footage of the incident, but also edited takes of the shooting, complete with subtitles, a slow-motion view of crucial moments and play-by-play text that include an officer’s version of events not readily seen in the video.

The 29-minute video was part of a robust package of information posted on a city web page, which also includes separate video commentary from the Vallejo police chief, a Q&A section and information about fatal-incident protocol.

In a press statement, the department said it was the first time Vallejo police have ever released video in this fashion.

“It is our hope that we provided sufficient context for the community to understand the facts of this incident,” police said.

McCoy’s family, however, challenged the department’s motives in editing the footage and suggested police are attempting to spin the controversial shooting in their favor.

“They’re being political now,” said Marc McCoy, Willie McCoy’s older brother. “Look, that’s the way our society is. If your people do wrong, you’re not allowed to say, ‘Hey, we messed up.’ That’s the way we’ve been trained.”

The video, which includes footage from all six officers involved in the fatal shooting, begins with a narrative of events and then includes two maps of the scene, before cutting to an officer standing just feet from the driver’s side window. Police cruisers had already boxed in McCoy’s vehicle in the drive-thru.

“Gun, gun,” an officer says, immediately pulling out his weapon.

“I’m going to bust that f— window,” the officer says, shining a flashlight into the car.

More officers arrive on scene and begin walking around the vehicle with their guns drawn. Attempts to gain entry are unsuccessful because the car’s doors are locked.

“I’m gonna pull him out and snatch his ass,” says the first officer.

A caption on the video notes McCoy’s gun was loaded with an extended magazine.

The edited version of the video goes in slow-motion around this time, and on-screen text provides the officers’ account of McCoy’s actions that are unclear to the viewer.

“[Driver then bends forward at waist, verbal commands continue]” one screen states. On the next, “[Left hand reaches for gun on lap, officers fire].”

The six officers involved in the shooting — Officers Ryan McMahon, Collin Eaton, Bryan Glick, Jordon Patzer, Anthony Romero-Cano and Mark Thompson — were placed on administrative leave, but they have since been cleared to return to duty, police said.

In a video statement, Vallejo Police Chief Andrew Bidou says it’s the first time the department has released video along with a press release.

“[W]e’re trying to get timely and accurate information out to our community,” he said.

The department’s release comes on the eve of a new California law meant to make it easier for the public to view police body-camera footage. The law, which will take effect July 1, will require departments to release footage or audio within 45 days of a critical incident.

McCoy’s brothers and a cousin said they viewed the footage earlier this month with police brass and questioned if officers made a real effort to wake up McCoy before shooting him.

“My initial reaction was there was no (attempt at a) peaceful resolution or effort to wake him up,” said Marc McCoy.

He added that when Willie McCoy started to move, none of the officers identified themselves as police, leaving his brother no time to get his bearings.

Marc McCoy said he supports the release of the video, but noted that videos of police violence rarely result in criminal prosecutions or convictions.

“We have to let police know that as much as they are appreciated in the communities, they also have to be held accountable when they make mistakes,” Marc McCoy said. “And, unfortunately, they have been trained to make mistakes.”

“I don’t see what he did in order to justify the shooting,” Burris told The Chronicle. “It did not look like he was ever conscious in a real way.”

The city is expected to release a determination on the claim by April 14.

The Solano County coroner’s office has not released an autopsy report, and police said it is still unclear if McCoy was shot more than 20 times. The district attorney’s office is investigating the Police Department’s use of force.

“When viewing the body camera footage, the public should be aware that body cameras do not always reflect what the officer’s eyes see,” police said in its summary of events.

The city said it redacted the footage of officers performing first aid on McCoy out of privacy concerns.