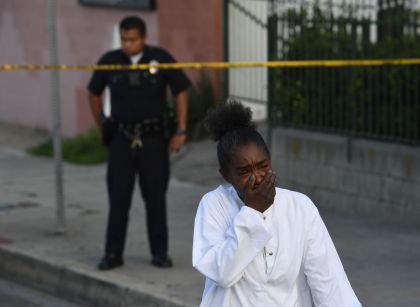 Facebook
Twitter
Google+
Pinterest
WhatsApp
LOS ANGELES (CBSLA) — Rapper Nipsey Hussle’s last tweet said, “Having strong enemies is a blessing,” a tragic foreshadowing of his shooting death in front of the Hyde Park clothing store that was part of his ongoing effort to give back to the community he was born and raised in.

Our hearts are with the loved ones of Nipsey Hussle and everyone touched by this awful tragedy. L.A. is hurt deeply each time a young life is lost to senseless gun violence. My Crisis Response Team is assisting the families coping with shock and grief.

Hussle, 33, was killed in a shooting Sunday that wounded two others in front of Marathon Clothing at Slauson Avenue and Crenshaw Boulevard. His sudden and violent death unleashed an outpouring of grief from celebrities like LeBron James and Rihanna to the bystander on the street who was witness to Hussle’s efforts to give back.

A woman reacts outside The Marathon clothing store owned by Grammy-nominated rapper Nipsey Hussle where he was fatally shot along with 2 other wounded, in Los Angeles on March 31, 2019. – In addition to the man who was killed, the two other victims were listed as stable at a hospital, said police, who said a male suspect fled in a car. (Photo by Mark RALSTON / AFP)

“He is someone that put our community on the map,” D. Johnson said in a raw voice. “People thought that our community was just about violence. And Nipsey put a change to that. He let them know that, even though we’re under from underprivileged communities of poverty, that we can still become something.”

Witnesses said a young man approached Hussle and two men before firing a number of shots and escaping in a nearby vehicle. Hussle was taken to a hospital, where he was pronounced dead. The other two men who were wounded are expected to be OK.

Investigators have not yet talked about a possible motive.

“For whatever reason this happened, it’s a tragedy. There’s no win in this. We lost,” South LA resident Dawn Lett said.

A massive crowd of people packed the parking lot in front of Marathon Clothing Sunday night to mourn Hussle, who had been on a mission to give back to his community.

“This whole area is changing, and with him giving and being a part of it, it made a lot of young people really proud,” Lett said.

In recent years, besides Marathon Clothing, he had opened apartments for low-income residents, a barbershop and a center for children where they could learn about technology. All those efforts followed his accomplishments in the music world, including a Grammy nomination and working with big names like Drake, Childish Gambino, 50 Cent, Kendrick Lamar and Snoop Dogg.

Opening facilities to serve the communities was not Hussle’s only strategy for bringing change to his community. The rapper had also been scheduled to meet with LAPD officials to discuss ways to stop gang violence — the day before his violent death.

Hussle, who was in a longtime relationship with actress Lauren London, leaves behind two children.