Home Conservative Life Measles Count in US This Year Already More Than All of 2018... 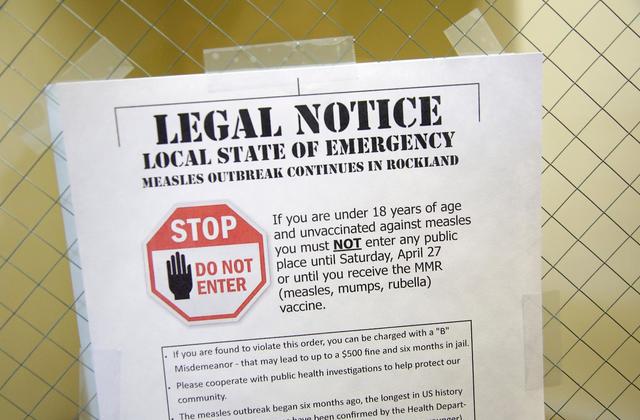 FILE – This Wednesday, March 27, 2019 file photo shows a sign explaining the local state of emergency because of a measles outbreak at the Rockland County Health Department in Pomona, N.Y. Measles is spread through the air when an infected person coughs or sneezes. It’s so contagious that 90 percent of people who aren’t immunized are infected if exposed to the virus, according to the Centers for Disease Control and Prevention. (AP Photo/Seth Wenig) The Associated Press

NEW YORK (AP) — U.S. health officials report that the number of measles cases through the first three months of this year have surpassed the count for all of 2018.

There have been 387 cases through March, the Centers for Disease Control and Prevention reported Monday. There were 372 last year. It’s the most since 2014, when 667 were reported.

Most people who get measles have not been vaccinated. Measles is spread through the air when an infected person coughs or sneezes, and it is extremely contagious.

For most people, measles is miserable but not life-threatening. There have been three measles-related deaths reported since 2000, including two in 2003 and one in 2015.

Copyright 2019 The Associated Press. All rights reserved. This material may not be published, broadcast, rewritten or redistributed.

Cartoons on Vaccines and the Measles