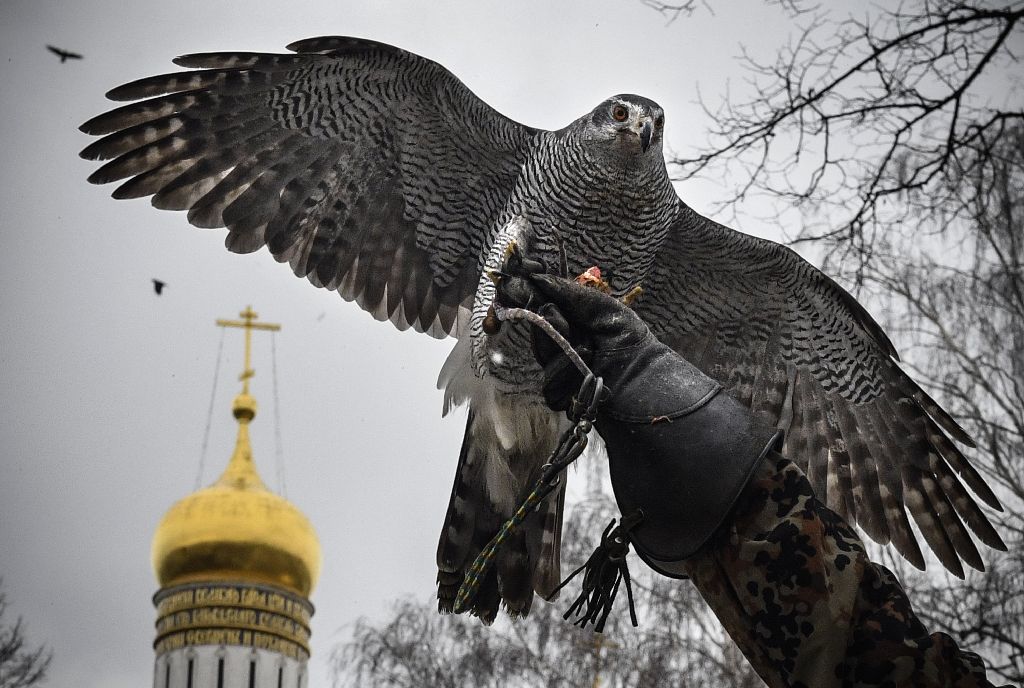 Moscow (AFP) – Alpha soars between the Kremlin’s golden domes, sowing panic among crows perched in nearby trees. The goshawk is one of a dozen birds of prey protecting President Vladimir Putin’s seat of power in Moscow.

Crows congregate in the Tainitsky Garden inside the red-brick Kremlin walls, croaking as they perch on trees and wheel in the sky.

But just the sight of Alpha, a 20-year-old female goshawk with silver-gray feathers, and her colleague Filya, an imposing eagle-owl, makes them scarper in a few minutes.

“The aim isn’t to get rid of all the crows but to scare them and get them to go away, so that they don’t set up home here and build nests,” said 28-year-old Alexei Vlasov, one of the camouflage-clad falconers of the Kremlin ornithological service.

This special unit, set up in 1984, has around a dozen birds, including goshawks and a peregrine falcon.

It is part of the Federal Guard Service.

The raptor’s job is to protect the Kremlin, one of the oldest mediaeval fortresses in Europe that has served as the seat of tsars, Soviet leaders and now Russian presidents and is a UNESCO World Heritage site.

Crows can “transmit a whole number of illnesses that are potentially dangerous to human health and damage the gold domes by scratching them and leaving droppings on them,” said Vlasov as he held golden-eyed Alpha with a gauntleted hand.

A rapid call came from her blood-stained beak.

Vlasov added that crows can also be “troublemakers and aggressive” in their interaction with humans.

Birds such as pigeons, crows and ravens sometimes cause problems in the Russian capital, whether pecking at flower beds or coating historic buildings with droppings.

For the Kremlin guards, it is easier to make them go away than to clean up after them.

During the early Soviet era, guards at the Kremlin even resorted to shooting crows, according to the memoirs of Pavel Malkov, who was the buildings’ superintendent at the time.

Bored guards took to shooting the “black mass of crows that hung from the trees” until Lenin himself put an end to the practice, complaining of a “waste of precious ammunition” as the Bolsheviks fought a civil war with their opponents, Malkov wrote.

For a while the Kremlin tried to scare off crows with recordings of the sounds of birds of prey, but this did not work.

The guards decided to use birds of prey after reading reports about their effectiveness. Now the birds are permanent residents at the Kremlin and undergo several months of training.

“All the birds have different hunting methods. Goshawks are sprinters, they are very fast over short distances. Crows don’t have much of a chance against them,” said falconer Vlasov.

The eagle-owl Filya is a “night hunter and totally silent” and his presence alone is enough to stop crows spending the night at the fortress, said his 34-year-old trainer Denis Sidogin.

The bulky bird with tufts above his large round eyes turned his head round 180 degrees to look behind him.

Across the world, some branches of the armed forces and security firms use birds of prey not just to scare off pests but also to bring down drones when they are flown into banned areas.

The Kremlin guards said that they do not currently use the birds for this, saying that it is difficult to do and less effective than modern techniques such as electronic jamming.

Both the French air force and the Dutch police have launched such anti-drone programmes, with mixed success.

The Dutch police ended up sacking their team of sea eagles, because they were too defiant.