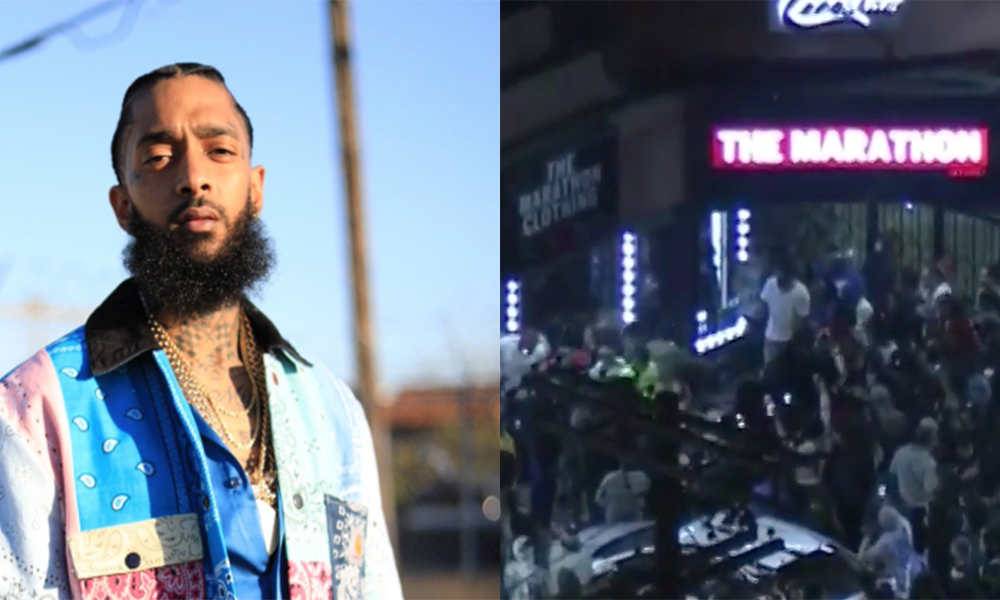 Grammy-nominated rapper Nipsey Hussle was killed Sunday afternoon, shot in broad daylight outside his store in South Los Angeles in a burst of gunfire that left two other people wounded, police said.

Hussle, who was known as much for his work in the community as for his music, was hit multiple times about 3:20 p.m. in front of his store, the Marathon Clothing, at 3420 W. Slauson Ave., police said. He was rushed to a hospital, where he was pronounced dead. He was 33.

Details remain scant, but a law enforcement source with knowledge of the investigation said Hussle was shot by a young man who opened fire at close range and then ran to a waiting getaway car. Based on initial information, the shooter is probably associated with a gang, the source said.

At a news briefing, Los Angeles Police Lt. Chris Ramirez described the suspect only as a black male and said he is still at large. About 8:30 p.m., detectives were still interviewing witnesses and trying to recover any security video that may exist.

“At this point, we’re not even sure as to whether he walked up, rode a bicycle or drove up in a car,” Ramirez said.

Earlier, as the sun set and LAPD and news helicopters circled overhead, hundreds of Hussle’s fans and friends gathered at Crenshaw Boulevard and Slauson Avenue, playing his music and waiting for updates. Some bought blue and white candles at a nearby liquor store and put them behind yellow police tape. A little girl held a poster of Hussle’s debut album cover with the words “RIP NIPSEY” bedazzled over it.

Hussle, born Ermias Asghedom, was a popular hip-hop artist who, after releasing his highly anticipated debut album “Victory Lap” in 2018, was nominated for a Grammy for best rap album.

Having strong enemies is a blessing.

Those who knew him described Hussle as a pillar of the community.

The rapper owned several businesses on the block where he was shot, said 54-year-old Hyde Park resident Glenn Taylor, including a burger restaurant, a barbershop and a fish market. He was known to give jobs to residents who were struggling to get by, some of them homeless. He once gave a pair of shoes to every student at 59th Street Elementary School. He also donated money to renovate the school’s playground and basketball courts.

Taylor, whose daughter was a childhood friend of Hussle’s, said he was stunned.

“He did so much for our neighborhood,” he said. “That’s why I’m here today. This has to stop.”

Hussle grew up in South L.A. in the 1990s. He made no secret of his early life in a street gang, saying in a 2014 interview with YouTube channel Vlad TV that he had joined the Rollin’ 60s, a notorious Crips gang clique, as a teenager.

“We dealt with death, with murder,” he told The Times in 2018. “It was like living in a war zone, where people die on these blocks and everybody is a little bit immune to it. I guess they call it post-traumatic stress, when you have people that have been at war for such a long time. I think L.A. suffers from that because it’s not normal yet we embrace it like it is after a while.”

Malik Spellman, a community activist, remembers when a teenage Hussle would staple fliers advertising his new music to telephone poles in South L.A. When his career took off, Hussle never forgot where he came from, Spellman said. He put most of the money he made back into the neighborhood.

When a local family lost a loved one to gun violence, he would sometimes give them money to help pay for funeral arrangements.

“The man was instrumental in a lot of stuff. Fighting gentrification, trying to stop gang violence,” said Spellman, who lighted a blue candle Sunday evening in Hussle’s honor and placed it on a sidewalk near the crime scene. “The facts are he was a good person.”

News of the rapper’s killing rippled across social media Sunday, with several of his fellow musicians and other celebrities tweeting their shock and condolences.

L.A. City Councilman Marqueece Harris-Dawson also released a statement, saying “Hussle had a vision of a neighborhood built for and by the sons and daughters of South L.A. During his life, he moved from shadows into the bright hope of freedom and community revitalization.”

Hussle was involved in the new Destination Crenshaw arts project — Harris-Dawson called him “the inspiration” behind its naming. And, last year, Hussle opened a co-working space named Vector 90 in the Crenshaw district, designed to call attention to the lack of diversity in the fields of science, technology, engineering and mathematics. The goal of the co-working space, Hussle told The Times, was to serve as a conduit between underrepresented groups and corporate partners in Silicon Valley and beyond.

Hussle developed a deep love of both music and technology while growing up.

“In our culture, there’s a narrative that says, ‘Follow the athletes, follow the entertainers,’ ” he told The Times in 2018. “And that’s cool, but there should be something that says, ‘Follow Elon Musk, follow [Mark] Zuckerberg.’ I think that with me being influential as an artist and young and coming from the inner city, it makes sense for me to be one of the people that’s waving that flag.”

Hussle combined his interests in several entrepreneurial pursuits, including the store outside which he was shot. He called it a “smart store” because visitors could use an app to enhance their experience while shopping for his fashion brand, the Marathon Clothing.

On Sunday evening, Christian Nuñez drove from Santa Monica to Hyde Park to pay his respects. Strapped across his chest was a cylindrical speaker thumping Hussle’s music. Nuñez said that he was homeless on the streets of Hyde Park as a teenager and that he instantly connected with Hussle’s lyrics.

Ruben Martinez Jr., just a year older than Hussle, said he remembers a teenage Hussle selling incense and CDs out of the trunk of his car. Witnessing Hussle’s success was an inspiration, he said. Hussle could’ve opened his businesses in Beverly Hills, but he chose Hyde Park.

Ominously, Hustle tweeted shortly before he died, “Having strong enemies is a blessing.”

“Violent retaliation for this event will not be tolerated,” he said. “Our communities have lost too many young men and bright futures to the scourge of gun violence. For healing to occur, even from this terrible incident, justice must be sought through legal means, and community peace must be found.”