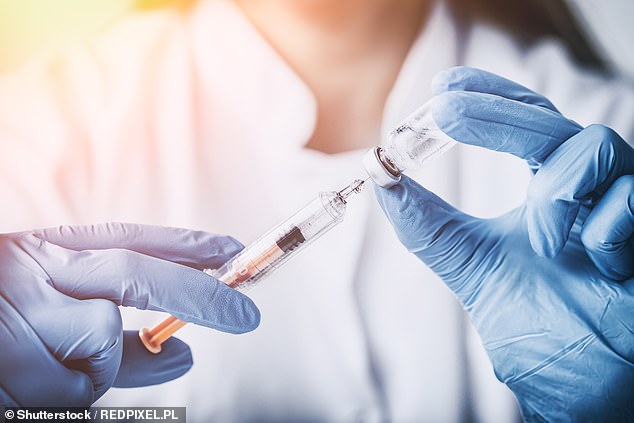 An experimental vaccine may someday prevent colorectal cancer in people with a genetic condition that pus them at a high risk, new research suggests.

Lynch Syndrome is a genetic condition that affects about 1.17 million Americans who are 70 to 80 percent more at-risk for colorectal cancer than the rest of the population.

They are also predisposed to develop other gastrointestinal cancers, and women with Lynch Syndrome are at greater risk of uterine and ovarian cancers.

Scientists at Weill Cornell Medicine developed a vaccine that destroyed the mutated cells made by Lynch DNA in mice.

The mice that the researchers vaccinated and gave a common anti-inflammatory drug to lived up to 60 percent longer than unvaccinated animals, suggesting that, if the shot is developed for humans, it could protect people from lethal cancers.

One in every 280 people have a genetic condition called Lynch Syndrome, putting them at up to 80 percent higher risk of colorectal cancer, but an experimental vaccine may prevent it

‘It could cure them over time. If started preventatively, they can live to be a normal age for those without Lynch Syndrome.’

Of course, the study was done in mice, so it’s not necessarily predictive of outcomes for people, but it’s certainly a bright spot of hope for those with Lynch Syndrome.

Scientists suspect that lifestyle factors like obesity are driving the surging rates of colorectal cancer in the US, but Lynch Syndrome patients are born at high risk.

Not only are they at greater risk of developing colorectal cancer, when they do, the tumors often mutate, making them harder to treat.

Other than advising a healthy lifestyle, there is currently nothing to do to change those risks.

Dr Lipkin and his team wondered if a vaccine could similarly block the effects of Lynch Syndrome mutations before they led to cancer.

Lynch Syndrome is among the most common genetic disorders and can affect several genes in the same family of DNA mismatch repair genes, which code for a system that fixes other genetic errors and mutations.

Since mutations in the genetic code can cause cells to grow out of control, becoming cancerous, people with Lynch Syndrome are missing one of the body’s natural mechanisms to prevent tumors.

Lynch Syndrome is the most common cause of incurable colorectal cancer, says Dr Lipkin.

Mice with Lynch syndrome have one of the same gene mutations that occurs in 60 to 80 percent of human Lynch sufferers, suggesting to the researchers that a vaccine that worked in mice might well work in humans.

Dr Lipkin and his team combined peptides – compounds made up of a chain of amino acids – known to fight tumor-causing substances with a second ingredient, called an adjuvant, that revs up the immune system.

In the mice they vaccinated, the shot ‘actually induced the immune system to respond against the mutations and kill the cells,’ explained Dr Lipkin.

‘So we see this significant reduction in the number of tumors that develop in the mice, and it extends their survival period.’

And the effects were even more dramatic when the scientists supplemented the vaccine with a regimen of Naproxen, extending lifespan by up to 60 percent for the Lynch mice.

‘And some developed no tumors at all, which was pleasantly surprising.

‘We never see that with Lynch Syndrome mice that aren’t on this kind of treatment.’

Currently, doctors advise Lynch-positive patients to take daily aspirin, which is linked to lower rates of colorectal cancer in these patients.

The latest findings, presented at the American Association for Cancer Research are by no means ready to be adopted for human use, so patients shouldn’t switch from aspirin to Naproxen just yet.

Nor is the vaccine ready to inoculate humans, Dr Lipkin says, particularly because tests in mice tell them little about the shot’s possible side effects.

‘There are a hundred steps that need to go correctly, if we want to take the simplest situation, to work out the bugs and have it working well,’ he says.

But from what they can tell about side effects, the vaccine appears safe thus far.

He and his team have already written a proposal to begin phase 1 clinical trials in humans and are hopeful that they will get enough funding to start the studies by 2020.

Trump, Biden to appeal to last-minute voters in Florida