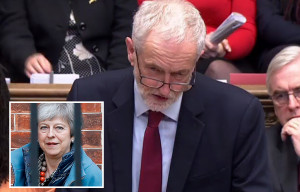 The House of Commons rejected four different Brexit options leaving the UK more deadlocked than ever.

Just 11 days before the new date Britain is set to leave the EU, they voted against four options including a customs union, second referendum, cancelling Brexit or a Norway-style deal.

And Tory Nick Boles, the architect of one of the soft Brexit plans, dramatically announced he would quit the Tories live in the Commons.

“I have given everything to try to find a compromise. I accept I have failed,” he told MPs.
And in a blast at his own colleagues he added: “I have failed chiefly because my party has refused to compromise.”

Now Theresa May could now bring her deal back for a FOURTH attempt, arguing that it is still the only way to unite the country.

Her hopes could have been raised that now she can force through her deal, as last Friday it gained more votes than any of tonight’s options.

As Westminster braced for the week that will decide Brexit:

The PM now can breathe a sigh of relief tonight as she won’t be forced into a soft Brexit.

Any watered down Brexit would have divided the Cabinet and could have sparked a huge walk-out of Brexit champions like Andrea Leadsom, Penny Mordaunt and Liam Fox.

But she still faces a mammoth five-hour showdown with her top team today as they try and plot a way forwards.

Several of them will try and urge her to scrap her deal altogether and go for a No Deal on April 12.

If the PM’s deal gets rejected again she could call a general election in a final roll of the dice to break the deadlock.

Brexit Secretary Steve Barclay warned Britain could crash out of the EU with no deal in less than a fortnight unless warring MPs can finally back a deal.
He said: “This is now the second time the House has considered a wide variety of options for a way forward.
“It has once again failed to find a clear majority for any of the options.
“And yet the result of the House on Friday not to endorse the Withdrawal Agreement means that the default legal position is that the UK will leave the EU in just 11 days’ time.
“To secure any further extension the Government will have to put forward a credible position to the EU on what we would do with the extra time.”
He said that if MPs back a deal this week they could avoid Britain having to take part in costly EU elections.

The House of Commons again votes against all options. A hard #Brexit becomes nearly inevitable. On Wednesday, the U.K. has a last chance to break the deadlock or face the abyss. https://t.co/iixDhr5t6N

Tonight John Bercow risked fresh uproar among Brexiteers by refusing to pick the No Deal amendment for MPs to vote on.

One motion was for the UK to quit the bloc without a deal on April 12 – which is already the default option.

And the other would give the UK a right to exit the Northern Irish backstop by amending the withdrawal deal at a later date.

He didn’t allow any debate or voting on Tory John Baron’s plans, and instead allowed four motions which would lead to a softer Brexit, a delay or a total scrapping of our exit.

And he told fuming Leave MPs that their argument had been “aired repeatedly” and had been rejected.

“‘It may or may not feature in the future but in terms of trying to broker progress now I did not think it was the most sensible motion to choose at this time,” he stubbornly insisted.

Brexiteer MP David Davies blasted tonight: “MPs were denied the right to vote for a full WTO Brexit on the ballot paper tonight. It was a choice between soft Brexit, no Brexit or holding another referendum to get a different answer. So much for democratic innovation of ‘indicative votes’.”

MPs were denied the right to vote for a full WTO Brexit on the ballot paper tonight. It was a choice between soft Brexit, no Brexit or holding another referendum to get a different answer. So much for democratic innovation of “indicative votes” pic.twitter.com/C6gUdUlsms

How do tonight’s Commons votes work?

TONIGHT’S second round of “indicative votes” were intended to find a consensus on Brexit – but nothing got a majority.

MPs debated multiple different Brexit outcomes before having their say in a formal parliamentary ballot.

MPs write their name on the paper and vote Yes or No on each of the options before handing them back to a clerk.

Ahead of the debate, MPs tabled a total of eight different motions, and four were selected by Mr Bercow to go for a vote.

Backbenchers will again take control of the House of Commons business on Wednesday, when they could write the most popular option into law.

The options that all lost tonight are:

CUSTOMS UNION – LOST 273 votes – 276
Ex-Chancellor Ken Clarke has an amendment keeping the UK in the customs union, which stops us doing trade deals, but leaving the single market so we can end free movement.

NORWAY PLUS – LOST 261 – 82
The “Common Market 2.0” proposal by Tory MP Nick Boles would keep Britain in both the single market and customs union, but introduce new curbs on immigration from the EU.

SECOND REFERENDUM – LOST 280 – 292
A motion drawn up by Labour’s Peter Kyle and Peter Wilson calls for a referendum on any deal approved by the Commons.

STOP BREXIT – LOSY 191 – 292
The most hardline anti-Brexit proposal would force Theresa May to revoke Article 50 entirely in a last-ditch effort to stop No Deal.

One EU official told the Financial Times that if the deal doesn’t go through this week, Brexit is likely to be delayed for months.

The source said: “Either the UK asks for an extension beyond May 22, in which case it must participate in the European Parliament elections, or it must adopt the withdrawal agreement.”

Britain is currently due to leave the EU next Friday, April 12 – but Mrs May is almost certain to request a delay instead of leaving with No Deal.

Senior ministers are bitterly divided over whether Britain should go for No Deal or stay in the customs union if the PM’s deal is killed off for good.

Liz Truss said today: “I think we are well prepared for No Deal, I don’t have any fear of No Deal.”

But Michael Gove hit back, saying: “We have to leave the European Union in good order. Parliament won’t vote for No Deal. No Deal is bad for our economy and bad for our union.”

What time is the Brexit vote and what are the possible outcomes?

Who is Nick Boles and why has the Tory MP been forced to quit in a Brexit row?

Senior Brexiteer Steve Baker suggested that if Mrs May does opt for the customs union, he could quit the Tory party and back a no-confidence vote triggering a snap General Election.

Last Friday the withdrawal agreement was defeated by 58 votes.

To win a fourth vote on the deal, Mrs May would have to persuade around 15 of her own Brexiteer MPs and another 15 from Labour to back her.

SENIOR Tories lashed out at Theresa May tonight for refusing to allow Cabinet ministers to block MPs’ bid to enforce a soft Brexit.

The PM ordered all 28 members of her top table to abstain from the second round of ‘indicative votes’ in the Commons last night.

All other Tory MPs were given a free vote, to stop Mrs May having to sack any ministers who wanted to defy her wishes.

But with rebel Tories allying with Labour, a successful attempt to demand Britain joins a customs union or the single market was on a knife edge.

One junior minister dubbed it “a mad decision”, adding: “The Cabinet  could have blocked any option if they’d turned up. I don’t know what No10 is thinking”.

A disappointed Cabinet minister added: “Is it really acceptable for those of us in Cabinet not to have a view on whether we should be in a customs union or not?”

Speaking ahead of the vote, he said the UK staying in the Brussels’ trade policy “really would be the best thing that could happen” for Europe.

And he insisted that in such a scenario the Political Declaration could be rewritten at breakneck speed so Britain still quits on May 22.

And Commission boss Jean-Claude Juncker said the EU was fed up with MPs failing to spell out a clear way forward on Brexit.

He said: “In comparison to the British parliament a sphinx is an open book. We need to get the sphinx speaking. We’ve had enough of the silence.”

We pay for your stories! Do you have a story for The Sun Online politics team? Email us at tips@the-sun.co.uk or call 0207 782 4368. We pay for videos too. Click here to upload yours