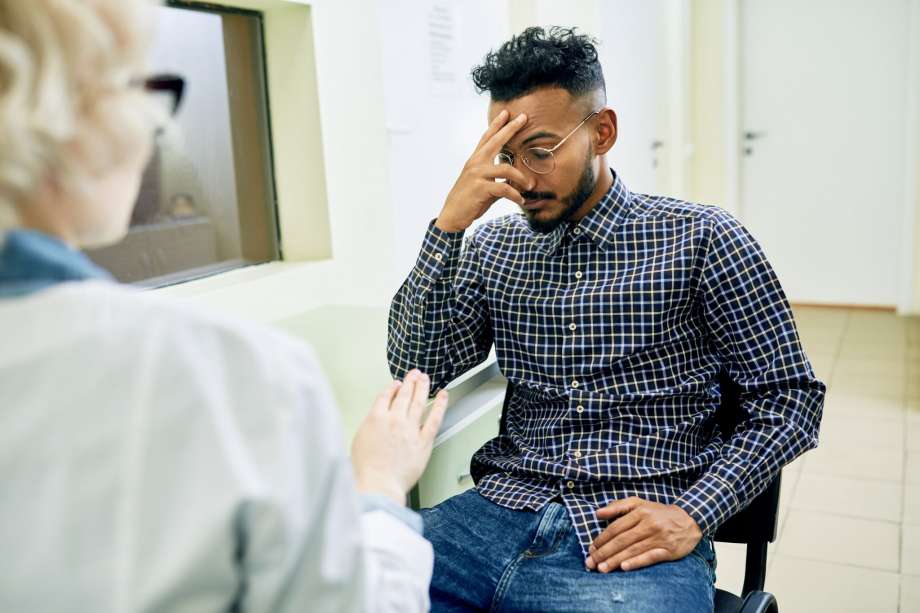 Click ahead to see the most and least stressful jobs, according to one study.

Click ahead to see the most and least stressful jobs, according to one study.

A common ailment is going around, and you probably know someone plagued by it. Caused in part by social media, the 24-hour news cycle and the pressure to check work email outside of office hours, it could hit you, too – especially if you don’t know how to nip it in the bud.

Books are being published about it, high-powered medical groups are raising alarms and ordinary people are feeling it. A recent report from Harvard and Massachusetts medical organizations declared physician burnout a public health crisis. It pointed out the problem not only harms doctors but also patients.

“Burnout is associated with increasing medical errors,” the paper said.

“Organizations typically reward employees who are putting in longer hours and replace workers who aren’t taking on an increased workload, which is a systematic problem that causes burnout in the first place,” says Dan Schawbel, research director of Future Workplace, the firm that conducted the survey along with Kronos.

“Mommy Burnout,” a book published last year by psychologist Sheryl Ziegler, resonated with women who had run themselves into the ground trying to be super mom (and dads made it clear they were burned out, too).

A new book, “Burnout: The Secret to Unlocking the Stress Cycle,” by sisters Emily Nagoski (a health educator) and Amelia Nagoski (a choral conductor who was hospitalized for burnout) aims to help women, in particular, live a more balanced life.

Burnout is a term easily tossed around, the way somebody might claim to be starving when they’re simply hungry, or freezing when cold. That’s harmless if a person is describing a tired day or week. But somebody who is actually burned out should be prepared to take serious action because it’s a condition that needs attention.


Amelia Nagoski was juggling the demands of a doctoral program when she experienced such severe abdominal pain she was hospitalized. Doctors concluded it was “just stress” and told her to relax. Turns out, she had stress-induced inflammation from burnout.

Ziegler defines burnout as “chronic stress gone awry.” The big three symptoms are emotional exhaustion, cynicism and feeling ineffective, according to the Maslach Burnout Inventory (MBI), a survey designed to measure employee burnout in the workforce. Other symptoms can include frequent colds or sicknesses, insomnia and a tendency to alleviate stress in unhealthy ways, such as with too much alcohol or online shopping.

Part of the difficulty of pinpointing true burnout may be because burnout is a nonmedical term – at least in the United States. The Diagnostic and Statistical Manual of Mental Disorders doesn’t list it as an illness. But other countries including France, Denmark and Sweden, do recognize burnout syndrome and consider it to be a legitimate reason to take a sick day from work.

“Everybody intuitively recognizes what burnout feels like in their bodies and their feelings and their thoughts,” Emily Nagoski says. “It’s like art: You know it when you see it.”

Even without an official diagnosis – or agreed upon definition – American researchers have studied burnout for decades. Psychologist Herbert Freudenberger popularized the term in the 1970s, basing it on his work with drug addicts where he witnessed their veins burn out from needle injections and their cigarettes burn down. Soon after, psychologist Christina Maslach developed the MBI.

Burnout is caused by chronic stress, not stressors, the Nagoskis say in their book. It’s important to differentiate the two. Stressors are external: to-do lists, financial problems or anxiety about the future. Stress, on the other hand, “is the neurological and physiological shift that happens in your body when you encounter (stressors),” the Nagoskis write.

To fix burnout, people need to address the stress itself. They must allow their body to complete its stress response cycle. Instead, people tend to focus on stressors. “They assume their stress will go away if they’re on top of things, if they’re accomplishing things and constantly checking things off their to-do list,” Emily Nagoski says.

Davis-Laack practiced commercial real estate law before the Great Recession of the late 2000s. The fast-paced environment gave her a constant adrenaline high as she closed deals and kept so busy that she barely left time to grab a handful of peanuts for lunch. Her frequent headaches, stomach aches and colds threatened to drag her down, but no doctor could give her a diagnosis.

One day, drafting a document in her office, she says she felt like she couldn’t breathe. She bolted out of her chair and raced to a nearby health clinic. “Help me!” she gasped. She was having a panic attack. After two more medical crises landed her in the emergency room, she feared a mental or physical collapse if she kept going. She decided to walk away from the law.

Still unsure of what was wrong, she poked around the internet doing research of her own when she came across information on burnout. “I was like, ‘Oh my God, this is exactly what happened to me!’ “

Davis-Laack traces the beginning of her burnout back to her teenage years.

“There were a lot of messages to be a high achiever,” she says. “Those check-the-box matrix measurements were important to me. I internalized them.”

The messages took an even stronger hold once she started working.

She returned to graduate school to study well-being, the effects of stress and their effect on the workplace. In 2013, she opened the Davis Laack Stress & Resilience Institute in Wisconsin. She now teaches workshops on burnout.

For those who suspect they might be on the road to burnout, there are practical tools to mitigate it. Among others: physical exercise, sleep and positive social connection (the real kind, not the Facebook kind). The importance of balance and self-care to prevent burnout likely isn’t surprising to most.

“There’s nothing fancy about what it would take to turn things around,” says Ziegler, the “Mommy Burnout” author. “But it’s a huge shift in the cultural mind-set. That’s the challenge.”

Plus, fixing burnout can feel like adding more stressors. An employee who takes a lunch break in a park (time in nature reduces stress) might feel pressured to stay late at the end of the day. A yoga class or walk is another item to squeeze into the calendar. A mom can’t quit her parenting job. To address time-management issues, the Nagoskis provide work sheets in their book to help readers reprioritize activities. Ziegler suggests setting boundaries with social media. Use the internet for help, such as ordering groceries, but limit scrolling to 10 minutes a day. Also, it’s OK to remove activities from the calendar (or quit them completely) so you can exercise.

Researchers from the University of Montreal questioned 2,026 people, half women, in 63 different workplaces. Their work, published in the Annals of Work Exposure and Health, found that women reported higher levels of burnout.

One reason was because women have more work-and-family conflicts. The women’s rights movement was “supposed to give women choices,” Ziegler says. “Sounds awesome, but it became you need to do it all. You need to run your house and be the perfect wife and mom and work. The stress on women got higher.”

Other studies have shown that rates of burnout are more or less equal among genders, although males and females experience it differently. A study published in BMC Public Health showed that female physicians are susceptible to burnout from emotional exhaustion while male physicians to burnout because of cynicism.

Steven Manning remembers the night he realized he had become pessimistic about practicing medicine. One Wednesday at his family care practice in Williamston, North Carolina, he worked on electronic medical records well past 9 p.m. His wife and kids waited for him at home. He had seen about 30 patients that day but felt he hadn’t given a single one the highest level of care because the appointment times were too short. Yet the hospital and insurance companies kept pressuring him to see more patients a day, not fewer.

“I began to think, ‘I’m burned out. How did I get to this point? I don’t enjoy coming into work.’ ” It wasn’t too late to make a change. Within a year, Manning started a direct primary care practice, a model where patients pay a membership fee, negating the need for insurance billing. Without mounds of paperwork, he had time to do what he truly wanted: help patients.

“It brought back the joy of medicine I felt I was missing,” he says. “Before, I barely had time to address my patients’ diabetes, hypertension and heart failure, let alone spend time taking a mental and spiritual inventory.”

Now, he talks with patients about depression, anxiety and stress and notices many patients are burned out, especially mothers of young kids.

She poured her heart and soul into fixing the troubled lives of criminals who had messed up with drugs and violence only to wind up devastated when her hard work seemed pointless.

“I’d call my mom every day on my way home from the office crying,” she says. “I was either sad over a client who was having her third meth-addicted baby or crying over a shockingly rude email by opposing counsel.” When she added motherhood to the mix, her feelings of failure increased. “I didn’t know what I was doing. Nobody does with a first child.”

Burned out on “doing the next thing I was supposed to do to be a good girl and get ahead,” she knew she needed downtime, but she was afraid to take a step back from the hamster wheel. “Boredom goes against everything we’re told to do to succeed, achieve and be proactive,” Swain says. “Even when I clean the house, I think, ‘Well, I should take the opportunity to listen to a podcast. Maybe I can grow as a person.’ Honestly, I’d grow more if I chose to be in silence and let my mind wander.”

She tried it. Rocking her baby to sleep, she wanted to watch the TV series “Game of Thrones” or scroll through her phone. But she couldn’t. One wrong move – or the glow of a screen – would wake her baby up. At first, Swain felt angry and resentful at the lack of distractions, but the stillness gave her an opportunity to daydream. That opened the door to creativity.

“I started creating little poems and rhymes in my head. I felt exhilarated,” she says. Eventually, Swain wrote a children’s book. “I felt a sense of purpose again,” she says.

The Nagoskis agree that daydreaming during low-demand tasks, having a creative outlet and engaging with something larger are three more keys to preventing burnout. They suggest writing your own obituary to find out what is meaningful to you.

“It sounds dark,” Amelia Nagoski says. “But it makes you think about who you are and what’s important to you.”

Making space in our lives so we’re not so hurried and harried isn’t easy, especially in a culture that shames slow living, Amelia Nagoski says. Preventing burnout requires hard decisions. Everyone has the same amount of time in a day: 24 hours. To rest – whether with a walk, an extra hour of sleep or a talk with a friend – means something else drops off the schedule.

At first, you might panic that you’re not “accomplishing” something. But before long, you may notice you’ve moved farther away from a breaking point. Your downward spiral will change directions.