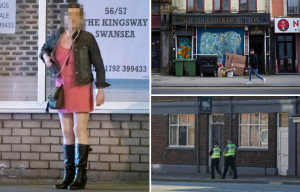 DRAMATIC photos reveal the brutal world of British bare-knuckle boxing where fighters trade blows to the face without any gloves.

The incredible images give an insight into the bloodthirsty sport where fights often end in knockouts.

Photos show a series of bloody showdowns from the Ultimate Bare-Knuckle Boxing (UBKB) event in Manchester on Saturday.

Fighters are left with serious facial injuries and blood pouring from gaping cuts.

Organisers of bare-knuckle boxing insist the fights are above board and legal.

But the British Boxing Board of Control, which regulates licensed boxing, believes it is operating in a grey area.

The board’s general secretary, Rob Smith, has said previously: “It is a cloudy area, but I do believe it is illegal.

“Police deal with it as a public order matter and stop it.

“It is crazy, there is an inherent risk in licensed boxing and we work very hard to ensure it is as safe as possible.”

But those involved in the sport say it’s legal as long as the local authority has given permission and safety measures are in place.

Bosses expect to see it become a mainstream sport within two years, mimicking the rise of Mixed Martial Arts’s rise from the underground to a prime-time TV sport.

Those competing can only punch and bouts are often stopped by the fighter’s support team throwing in the towel, or the referee recognising it is an unfair contest.

A mix of veteran fighters and those taking to the ring for the first time battled it out over 15 fights.

Bouts consisted of three two-minute rounds with a 20-second count on any knockdown.
Returning fighters Joe Clarke, John Spencer and Will Cairns all walked away with belts after winning their respective title battles.

Cairns’ beat Duane “The Wrecking Machine” Keen in the fight of the night to retain his crown.

Earlier in the night, Lucas Marshall won his battle with Tadas Ruzga in a close contest.

UBKB is owned and run by Amanda and Shaun Smith- dubbed the “UK’s Scariest Debt Collector”.

Last year the barbaric sport made a comeback in the US after being forced underground for 150 years.

Supporters are hoping to shake off the sport’s underground image by moving to established, mainstream venues.

Fans of the sport – for which top fighters can earn up to £50,000 a bout – insist it’s legal provided permission is given by the local authority and safety measures are in place.

But the British Boxing Board of Control, which regulates licensed boxing, believes it’s a grey area.

My daughter, 15, was murdered by twisted uncle who lured young girls home

The no-holds-barred sport gained popularity in Britain near the end of the 17th century.

However it was pushed underground with the introduction of the so-called Queensberry rules in 1867.

The code provided the basis for modern boxing and mandates that fighters have to wear gloves.

Fighters KO each other in bare-knuckle boxing bout