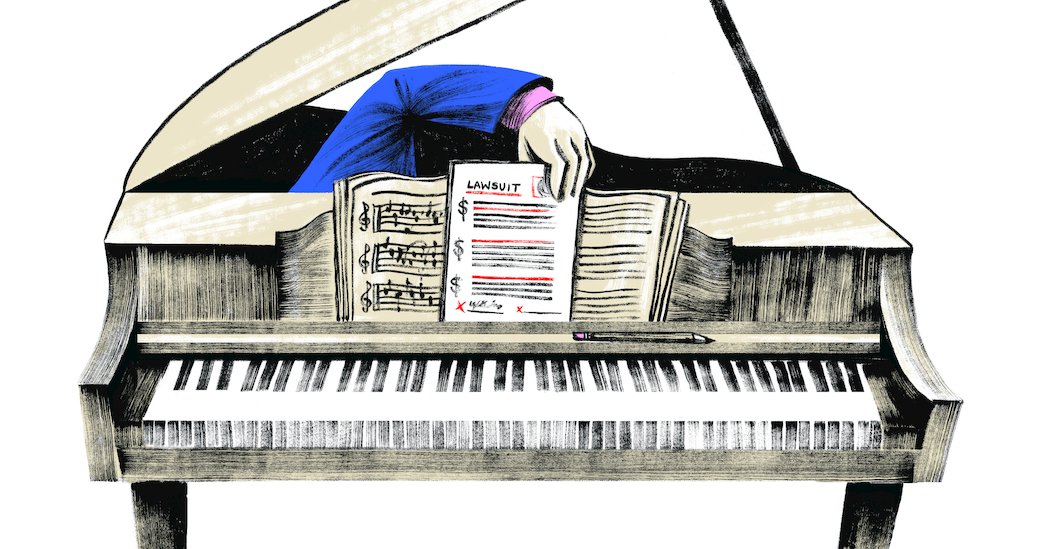 It’s not easy to be a songwriter in the pop world these days. Listeners rarely see your name. For anything but a giant hit, royalties from streaming are infinitesimal — and big tech companies seem to want to keep it that way.

And then there’s the shadow of “Blurred Lines.”

Four years after the copyright trial over that No. 1 song — in which Robin Thicke and Pharrell Williams, its primary writers, were ordered to pay more than $5 million for copying Marvin Gaye’s disco-era hit “Got to Give It Up” — the case still looms over the music industry and individual songwriters, who were left to wonder when homage bleeds into plagiarism.

Intellectual property lawyers and music executives interviewed for this article said the case had fueled a rise in copyright claims. In September, Ed Sheeran will go to court to defend “Thinking Out Loud,” a Grammy-winning song that has been accused of mimicking another Gaye classic, “Let’s Get It On.” Two years ago, Mr. Sheeran settled another suit by giving up part of his ownership in the top 10 hit “Photograph,” which was accused of having similarities to “Amazing,” a song by the British singer-songwriter Matt Cardle.

The aftereffects of the “Blurred Lines” decision — which was upheld on appeal last year — have been felt most acutely by rank-and-file songwriters, who work in obscurity even as their creations propel others to stardom. The ramifications for them have been inescapable, affecting royalty splits, legal and insurance costs, and even how songs are composed.

The songwriter Evan Bogart, who has written for Beyoncé, Rihanna and Madonna, described second-guessing himself in the studio, worried that a melody or lyric might cross a line he can no longer locate.

“I shouldn’t be thinking about legal precedent when I am trying to write a chorus,” Mr. Bogart said.

Most accusations of plagiarism never go before a judge. Instead, they are settled quietly — and often protected with confidentiality agreements — with the results evident only in the fine print of writing credits.

Take “Friends,” a hit last year by the D.J. and producer Marshmello and the singer Anne-Marie. When the song first appeared on the charts, in February 2018, it was credited to three people: Marshmello, Anne-Marie and Nat Dunn, an Australian-born singer and songwriter. By June, after it had climbed to No. 11 on the Billboard chart, and versions of it had racked up more than 640 million YouTube streams, five additional names were listed among the song’s creators.

Between the song’s release date and its international success, the three people originally credited as the writers of “Friends” were accused of ripping off a little-heard 2017 song called “Obvious” by the London-based producer Eden Prince, featuring the singer Cassie.

Ms. Dunn, one of the writers of “Friends,” said in an interview that she believed the claim was “ridiculous,” but that her advisers had instructed her not to fight it and potentially end up in court, where the outcome would be unpredictable.

“Everyone was like, ‘Let’s just clear it up and make it go away,’” she recalled. “I reluctantly settled.”

Ms. Dunn declined to divulge any details about the settlement terms. Marshmello and Anne-Marie declined to comment, and representatives of the writers of “Obvious” did not respond to inquiries.

Copyright disputes are nothing new in music. In the United States, they go back at least as far as a lawsuit over the illicit publication of the sheet music of W. J. Wetmore’s “The Cot Beneath the Hill” in 1844.

Occasionally, an outlying case will force industrywide adjustment. In 1976, for example, songwriters had to reckon with the idea of unintended infringement after George Harrison was found to have “subconsciously” based his first solo hit, “My Sweet Lord,” on a girl-group classic, the Chiffons’ “He’s So Fine.” After the decision, Mr. Harrison wrote in his memoir, he felt a “paranoia about songwriting that had started to build up in me.”

The “Blurred Lines” case, many lawyers and executives say, has become the latest watershed, putting the commonly understood rules of songwriting up for debate.

As songwriters often remark, there are only so many notes in the scale, and influence is essential to the art. Harvey Mason Jr., a songwriter and producer, said the “Blurred Lines” case “unnerved a lot of people writing songs, because a lot of what inspires creative people is the work that has been done before.”

It changed the game for the lawyers, too. Edwin F. McPherson, a litigator who did not agree with the “Blurred Lines” decision, said the case had changed the calculus about which copyright cases prevail.

“In a normal world, I would say there is a very slim chance,” Mr. McPherson said. “But now I have to add a caveat every time I advise a client: But ‘Blurred Lines.’”

At the “Blurred Lines” trial, an eight-person jury heard detailed and esoteric testimony by expert witnesses from both sides about what, if anything, Mr. Thicke and Mr. Williams had copied from “Got to Give It Up.” The Gaye estate contended that specific musical passages had been lifted. Lawyers for Mr. Thicke and Mr. Williams countered that they had simply created a genre piece with a similar groove and feel, the kind of thing that musicians — and copyright lawyers — had long considered fair game.

In a dissenting opinion published when the case was upheld last year, Judge Jacqueline H. Nguyen of the United States Court of Appeals for the Ninth Circuit argued that the verdict allowed the Gaye estate “to accomplish what no one has done before: copyright a musical style.”

Mr. Thicke was also a fickle witness. He had given interviews citing “Got to Give It Up” as inspiration for his song, only to deny it in depositions, saying he had been intoxicated when talking with music journalists.

“I doubt if any more artists will tell Rolling Stone where they got their inspiration,” Tor Erik Hermansen, part of the songwriting and production duo Stargate, said in an interview.

Although the case did not result in any changes to copyright law, it has had a palpable effect. More songwriters are arming themselves with expensive insurance policies. And musicologists — academically trained experts who sometimes consult in copyright cases — are in greater demand.

“The phone rings more,” said Joe Bennett, a vice president at the Berklee College of Music who also works as an expert witness for hire. But, he added, “a huge number of the inquiries I get are spurious.”

Songwriters now face heightened scrutiny of their work while it is still in progress, as record companies and music publishers sometimes vet new songs for echoes of past works.

“I’ve had a couple experiences where I was writing something and a lawyer and musicologist said, ‘It sounds like this old song, it’s a very active estate, they’re going to come after you,’” said Mr. Mason, who has worked with stars like Whitney Houston and Kelly Clarkson. “I changed a few notes.”

Any settlement can have significant consequences for writers. Just a sliver of streaming revenue is earmarked for songwriting royalties, and most pop songs these days involve small gangs of writers; adding more names to the credits dilutes individual earnings.

Ross Golan, a songwriter who hosts the podcast “And the Writer Is …,” complained that when it comes to negotiations over royalty changes, writers can be left out altogether.

When “Talk About You,” a song he wrote with the pop singer Mika and another writer, was released in early 2015, Mr. Golan said, he was surprised to learn that his share of the royalties had been reduced, and that five new names had been added to the credits — all without his knowledge.

Mr. Golan said he was furious, but the only action he could take was largely symbolic: refusing to grant permission for a few licensing deals down the line.

“I would rather shelve my asset than have someone else sell my integrity,” he said.

But Mika acknowledged that the deal was necessary. In a Facebook post at the time, he said that it was “immediately obvious” that “Talk About You” bore a resemblance to two older songs — “Sarà Perché Ti Amo,” a 1981 European hit by the Italian pop group Ricchi e Poveri, and “I Only Want to Be With You,” a widely covered 1963 earworm by Dusty Springfield — and that it was his choice to share credit with the writers of those songs.

“Some music comes from no where, some is inspired by other songs and others totally reference them,” Mika wrote. “In that case its always good to be crystal clear before a record even comes out.”

Mr. Golan said that what bothered him was less the existence of a deal than the fact that he had no say in it. “If there are/were similarities, they were beyond unintentional,” Mr. Golan wrote in an email. “We’d never heard those songs.”

Christine Lepera, a longtime litigator, said there had been no substantial change in the number of music copyright claims that have reached the courts since “Blurred Lines.” But she added that the music industry’s worries over the decision had created a “self-fulfilling prophecy.”

“There’s no question in my mind that there has been a chilling effect,” Ms. Lepera said. “People have thrown a lot of weight behind this — more weight than it deserves. Defendants may be more inclined not to put up a fight.”

And for songwriters, the impact is still often felt when thoughts about the courtroom intrude in the studio.

“I’m not going to stop writing songs,” said Busbee, who has written hits for Keith Urban and Lady Antebellum. “But it puts a massive damper on the process, if you’re concerned that you will be sued.”