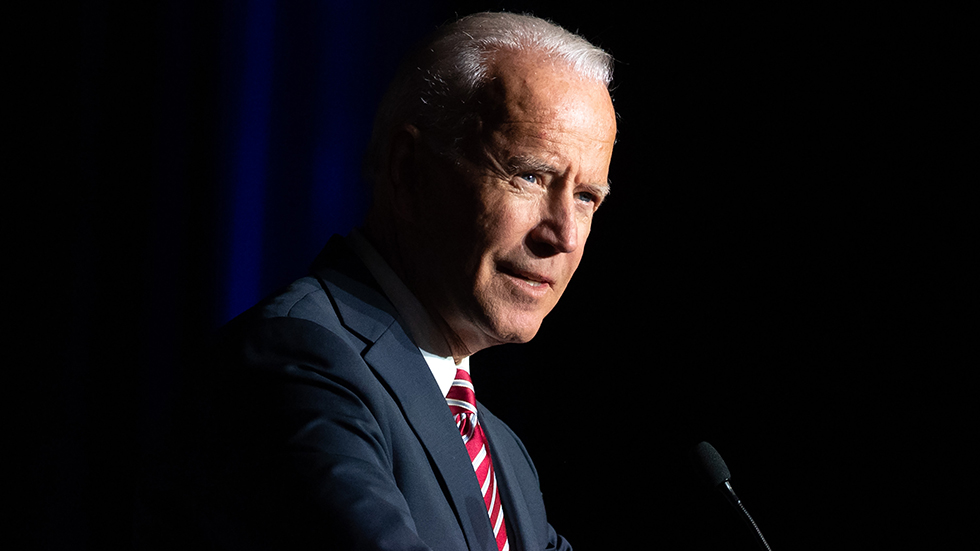 A spokesperson for Joe BidenJoseph (Joe) Robinette BidenWife of Obama defense secretary calls photo of her with Biden misleading Flores: Interaction with Biden ‘a violation of my bodily autonomy’ Biden, Sanders top 2020 Democratic field in Nevada poll MORE pushed back forcefully on Monday at a “cottage industry of lies” he said has formed about the former vice president supposedly crossing a line between affectionate or supportive behavior with women to something inappropriate.

Biden spokesman Bill Russo in a lengthy statement emailed to reporters highlighted two images of Biden with different women that he said had been repeatedly taken out of context — one with Stephanie Carter, who is married to former Defense Secretary Ash Carter, and a second with Sen. Christopher Coons

Russo said each photo had been put imperfectly into the context of allegations former Nevada state Assemblywoman Lucy Flores has made about inappropriate touching and kissing by Biden.

Flores herself, Russo said, has cited the Carter photo as an example of the behavior she experienced even though Carter has since said the photo of her has been misinterpreted.

He also noted worse “smears and forgeries” that he said have been in the “dark recesses” of the internet for some time.

“The Vice President has issued a statement affirming that in all the many years in public life that he has shaken a hand, given or received a hug, or laid his hand on a shoulder to express concern, support; or reassurance, he never intended to cause discomfort,” Russo’s statement reads. “He has said that he believes that women who have experience any such discomfort, regardless of intention, should speak and be heard, and that he will be among those who listen.”

“But the important conversation about these issues are not advanced, nor are any criticisms of Vice President Biden validated, by the continued misrepresentation of the Carter and Coons moments, or a failure to be vigilant about a cottage industry of lies,” Russo said.

The statement from Russo is just the latest effort by Biden’s camp to address the issues raised by Flores, whose allegations first appeared on Friday.

Biden is widely expected to enter the Democratic race for the White House, where allegations of inappropriate touching and kissing could torpedo his campaign.

Flores wrote that at campaign rally in 2014 supporting her bid for lieutenant governor, Biden put his hands on her shoulders, sniffed her hair and kissed her on the back of her head.

“The vice-president of the United States of America had just touched me in an intimate way reserved for close friends, family, or romantic partners — and I felt powerless to do anything about it,” she wrote.

Biden responded to the allegation on Sunday, saying that in his “many” years in public life, “I have offered countless handshakes, hugs, expressions of affection, support and comfort. And not once — never — did I believe I acted inappropriately.”

“If it is suggested I did so, I will listen respectfully. But it was never my intention,” he said.

In his statement on Monday, Russo said two pictures have been repeatedly mischaracterized.

The photo of Carter and Biden shows the vice president with his hands on her shoulders at Ash Carter’s 2015 swearing-in ceremony.

On Sunday, Carter said the image was “misleadingly extracted” from its situation and denied that Biden made her feel uncomfortable.

“After the swearing in, as Ash was giving remarks, [Biden] leaned in to tell me ‘thank you for letting him do this’ and kept his hands on my shoulders as a means of offering his support,” Carter wrote. “But a still shot taken from a video — misleadingly extracted from what was a longer moment between close friends — sent out in a snarky tweet — came to be the lasting image of that day.”

Russo said “right wing trolls” had been trying for years to take advantage of Biden through photos on the internet.

“These smears and forgeries have existed in the dark recesses of the internet for a while. And to this day, right wing trolls and others continue to exploit them for their own gain,” he wrote.