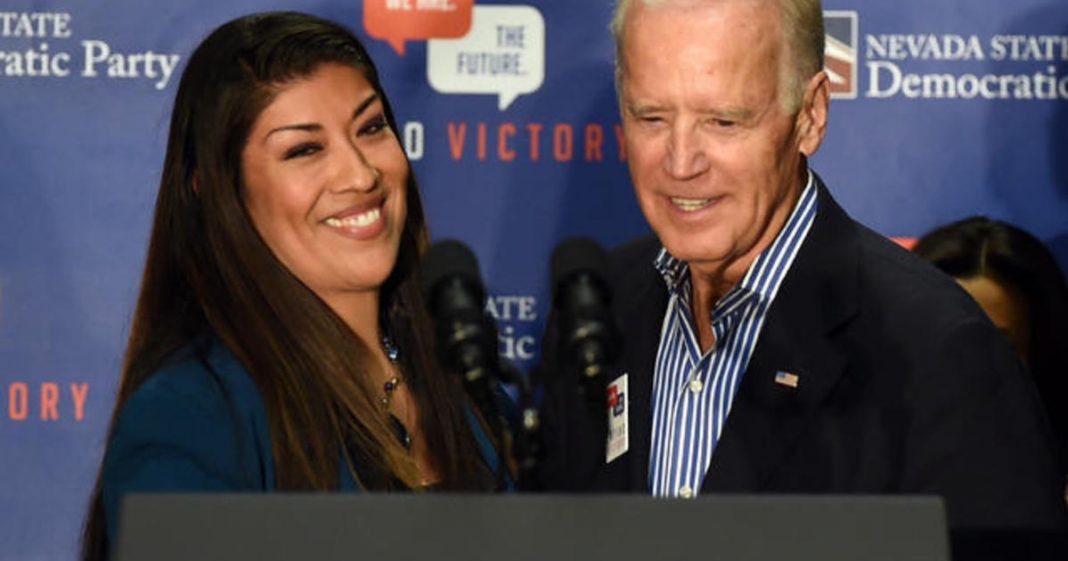 Lucy Flores, the woman who has accused former Vice President Joe Biden of making her uncomfortable by gripping her shoulders and kissing her head several years ago at a political event, says she would still support Biden in a general election match-up against President Trump.

Asked if she would support the former vice president if he wins the Democratic nomination, Flores, a Democrat who served in the Nevada State Assembly and supported Sen. Bernie Sanders for the nomination in 2016, told CBSN anchor Tanya Rivero, “That’s not even a question. Of course I would support Biden.”

But at the same time, Flores personally believes Biden’s actions are disqualifying, coupled with his previous “anti-abortion” stances, she says. Flores endorsed Sen. Bernie Sanders in 2016.

Biden issued a statement over the weekend saying he believes he never “acted inappropriately” and had no ill intentions but will listen to those who might say otherwise, after Flores claimed Biden kissed the back of her head during a 2014 campaign event.

Flores isn’t satisfied with Biden’s response, saying he fails to acknowledge that such behavior is inappropriate, “period.”

“I think that in terms of when he talks about his motivation etcetera we really need to also acknowledge that it’s not, it’s not about the intent, it is about the person on the receiving end of that behavior, that unwanted behavior, and the way in which it makes that person feel, especially, especially in a situation where you have that kind of a power imbalance going on,” Flores told CBSN.

Over the weekend, the wife of former Defense Secretary Ash Carter, Stephanie Carter, wrote a “Medium” post after social media re-upped the image of Biden touching her shoulders and leaning into her ear during the former defense secretary’s swearing-in ceremony. Many interpreted the photo as an instance showing Biden behaving inappropriately, but Stephanie Carter insisted otherwise.

A spokesman for Biden, Bill Russo, criticized reports that have made references to “supposedly similar, well-documented instances in which the vice president crossed a line between affectionate or supportive behavior and something — however unintentional — more inappropriate or unwelcome,” he said in a statement. And Russo pointed to Stephanie Carter and Sen. Chris Coons, who both felt the need to speak out in order to correct impressions about photos with Biden that have been twisted into something inappropriate by “right wing trolls” and others.

Flores said Carter’s “Medium” post is still “entirely in line” with everything she’s saying because what matters most is how such an interaction makes the recipient feel.

“It was considered an open secret that he behaved inappropriately with women,” Flores told CBSN.

“She clearly had a personal relationship with him,” but “I did not,” Flores also said.

BuzzFeed Expects to Break Even This Year, Thanks to Heavy Cost Cuts

BuzzFeed Expects to Break Even This Year, Thanks to Heavy Cost...