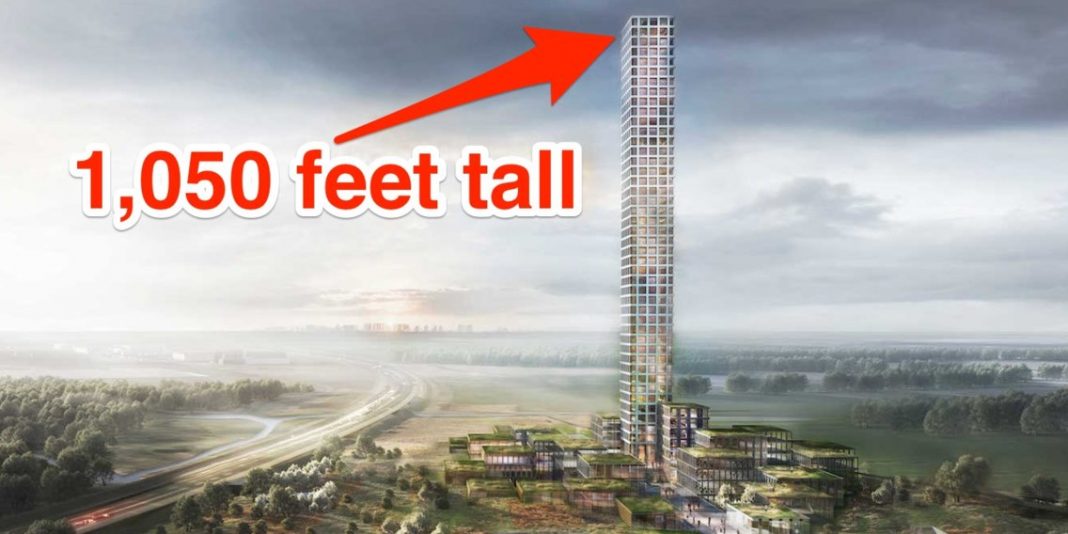 A 1,050-foot skyscraper soaring out of the earth isn’t exactly what you’d expect to come across in a corner of rural Denmark, and yet one may soon become a reality.

The fast-fashion giant Bestseller just secured final approval from the council of Brande, Denmark, to build its eponymous tower in the town of just 7,000 citizens.

When built, the Bestseller Tower, designed by the Danish architect Dorte Mandrup, will be the tallest building in Western Europe, beating out the Shard in London by 34 feet.

Read more: The new Salesforce Tower is the tallest building in San Francisco, but it’s not much taller than the Eiffel Tower

“We are very pleased that the plans have now been approved by the city council and we are extremely proud and humbled by the amount of support our project has received, especially locally. It is important for us to underline that the city council’s approval is merely one of the preliminary steps of a long journey,” Anders Krogh, Bestseller’s project manager, said in a statement.

Though the fashion company has long outgrown its roots in Brande — the owner, Anders Holch Povlsen, is Denmark’s richest man with a reported net worth of $7.2 billion — it’s hoping that the new building development will put the Jutland town on the map.

“It will be a landmark,” Krogh added in the statement. “But it will also function as an architectural attraction benefiting hotel guests, students and other users of the building.”

Despite the fact that it’s hardly in keeping with the rural surroundings, Bestseller doesn’t seem to have come up against much opposition from local residents.

“It’s hard to find anybody here who is opposed to the tower. Everybody thinks it’s a fantastic idea, and me too,” Morten Dickmann, a reporter for the local newspaper, told The Guardian.

“The Danish news media tried hard to find someone opposed, but they couldn’t find anyone,” he added.

Perhaps that’s why the only scrutiny of the proposed build has come from Copenhagen.

RokokoPosten, Denmark’s equivalent to The Onion, likened the skyscraper to the “Eye of Sauron” from the “Lord of the Rings” series in a spoof article entitled: “Breaking: Sauron moves to Brande.”

“I have offered to finance a major interactive art installation in the form of a blazing eye at the very top of the building, which I believe will serve as an artistic lighthouse for the whole of Central Jutland,” the publication quotes the fictional character Sauron as saying.

The Guardian did speak to one other opponent, who said that local media refused to publish her comments.

“People in Brande are so afraid to criticise Bestseller. It’s like a religion or something,” Trine Kammer, an architect who lives in Aarhus, Denmark, told the newspaper.

“Such a big building will make the world claustrophobically small. Why do I have to be reminded of Bestseller when I’m walking by myself in a quiet wood?”

Bestseller was keen to stipulate that this project is still a long way off from becoming brick and mortar, though.

“The city council’s approval is obviously essential, but we still have a lot of homework to do and much to consider before a project like this can be brought to life. We still have years ahead of us before a potential start date,” Krogh said.

I Skipped Kamala Harris’s Celebrity Zoom Call Because ‘I Want to Get Things Done,’ Not ‘Have a Rallying Cry Conversation’