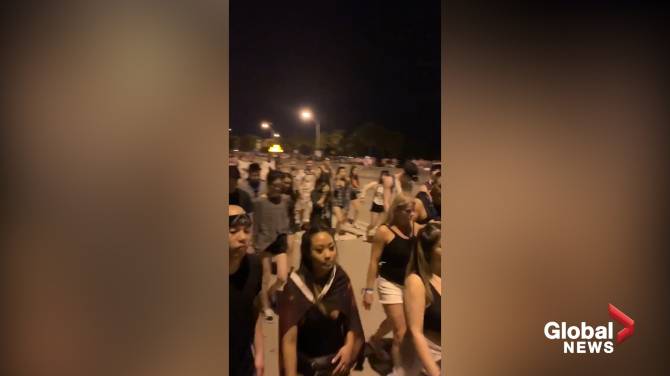 Problems with shuttle buses Friday night at Miami’s Ultra Music Festival forced an estimated 70,000 people to walk home for hours in the middle of the night.

Vancouver’s AM730 Traffic Anchor Alex Carrigan is there, and says because the electronic music festival was held on Miami’s Virginia Key Island, the only way to get out was to walk across a causeway.

“Extremely frustrating, because nobody knows what’s going on, and there is a mass amount of confusion,” Carrigan said Saturday.

“Everyone’s trying to deal with that confusion and we’re trying to work our way off the island.”

Carrigan said just about everyone who took the shuttle buses into the festival had to walk home.

“Pretty unreal, not a lot of people expected that they would be walking across the causeway,” he said. “It was super crowded of course. It’s not designed for 70,000 people to be walking across it all at once.”

Several other festivalgoers took to social media to document the chaos and voice their frustration.

Tens of thousands of people leaving @Ultra to walk 3 miles across a bridge (blocking traffic) because it was the only realistic option. Cabs weren’t running, uber was restricted, and shuttle lines were hours long. Terrible planning! An embarrassment. #ultra2019 #fyrefestival pic.twitter.com/vjoC6fFOd5

According to videos posted online, fires then broke out at the site of the festival, which had only wrapped up its first day.

Many compared the experience to what happened at the notorious Fyre Festival in the summer of 2018, when attendees were stranded with no accommodations or food on an island in the Bahamas after paying thousands of dollars for a ticket.


READ MORE:
Fyre Festival merch to be auctioned off to benefit scammed victims

This was my horrible experience. Walking in the middle of traffic due to horrible communication and transportation. It’s currently 3:56 and I’m still not off the island. @ultra pic.twitter.com/iVuaw4mW8p

Carrigan says he got to his hotel three hours later.

In a statement, Ultra Music Festival says they are working with the city to resolve the issues, and promised a “significantly improved transportation experience” for the rest of the festival, which is still expected to continue Saturday and Sunday.

Last night, many of you experienced challenging transportation conditions leaving the festival. This is unacceptable and inconsistent with the high standards you have come to expect from us. For this, we are sorry.

Security officials said before the weekend they were expecting as many as 170,000 people to attend the festival, and planned to have more than 230 buses on hand each night.

Ultra, which started as a satellite event during Winter Music Conference, has become a destination for electronic music fans from all over the world. Veteran acts including David Guetta and deadmau5 are slated to perform.

—With files from Sean Boynton and NBC News Miami