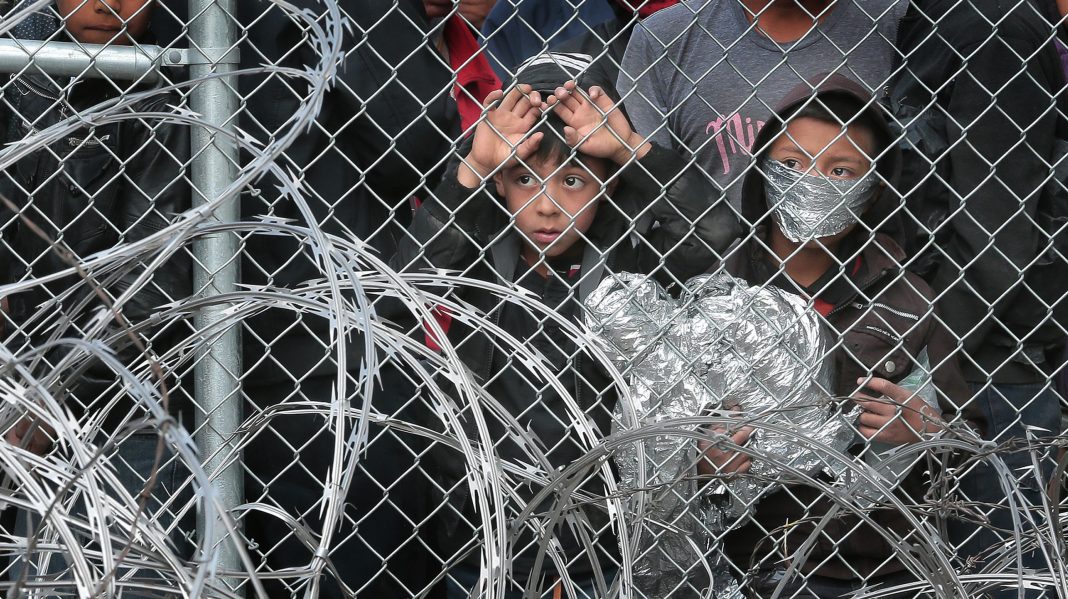 His appearance in El Paso on Wednesday, March 27, 2019, came as a temporary satellite processing center was set up under the Paso Del Norte International Bridge.
Mark R Lambie and Aaron Martinez and Samuel Gaytan, Wochit

EL PASO – Under a bridge connecting the U.S. with Mexico, dozens of migrant families cram into a makeshift camp set up by U.S. Customs and Border Protection. The families are there because permanent processing facilities have run out of room.

Seven hundred miles east, busload after busload of weary, bedraggled migrants crowd into the Catholic Charities Humanitarian Respite Center in McAllen, Texas. Organizers there are used to handling 200 to 300 migrants a day. Lately, the migrants have been arriving at a clip of around 800 a day, overflowing the respite center and straining city resources.

Along the Texas border with Mexico – from El Paso to Eagle Pass to the Rio Grande Valley – masses of migrants have been crossing the border in unprecedented numbers, overwhelming federal holding facilities and sending local leaders and volunteers scrambling to deal with the relentless waves of people.

U.S. Customs and Border Protection Commissioner Kevin McAleenan said Wednesday during a visit to El Paso that the border had hit its “breaking point” and urged Congress to come up with legislative solutions to the problem.

Border Patrol officials were on pace in March for more than 100,000 apprehensions and encounters with migrants – the highest monthly tally in over a decade, he said. Around 90 percent of those – or 90,000 – crossed the border between legal ports of entry.

The vast majority of those crossing between ports of entry turn themselves into Border Patrol agents, seeking asylum.

President Donald Trump recently declared a national emergency at the border to secure funding for a proposed wall, despite Congressional opposition. On Friday, the president in a tweet threatened to close the U.S.-Mexico border if Mexico didn’t stop undocumented migrants from coming.

But not even Trump’s proposed wall could stop the wave of migrants overflowing shelters in the Rio Grande Valley, where the vast majority are turning themselves in to apply for asylum, McAllen Mayor Jim Darling said.

A wall would go up on levees about a mile from the winding Rio Grande, which is the U.S.-Mexico border. Migrants will just have to cross the river to be in U.S. territory and seek asylum, he said.

“That’s not a solution for asylum-seekers,” Darling said.

Once in the U.S., the migrants – mostly families from Central America – are crowding into facilities designed to hold single adult men, said Theresa Brown, director of immigration and cross-border policy at the Washington-based Bipartisan Policy Center and a former CBP policy adviser for Presidents George W. Bush and Barack Obama.

Increasingly, smugglers are bringing larger numbers of families together and delivering them across the Rio Grande, knowing they’ll overrun facilities and be released until their immigration court date, she said. Under U.S. law, Border Patrol is not supposed to hold any migrant for longer than 72 hours.

Usually, Border Patrol hands them over to Immigration and Customs Enforcement, which can detain families for up to 20 days. But all of those facilities are overcrowded, Brown said, leading Border Patrol to skip the transfer to ICE and release migrants to shelters en masse.

“This is a system-wide collapse,” she said.

In El Paso, migrant families pressed their faces against the chain-link fencing at the makeshift outdoor shelter under the Paso Del Norte International Bridge as they awaited their turn to seek asylum. Children covered their mouths with swaths of Mylar blankets and peeked through the fencing at passing Border Patrol guards.

On Wednesday, more than 850 migrants were released to local shelters, marking a new high for El Paso. The numbers are expected to keep rising, according to Ruben Garcia, executive director of Annunciation House, a nonprofit that provides services to migrants released by federal authorities.

“It’s going to be very, very challenging,” he said.

Garcia and other shelter organizers have relied on a growing number of volunteers to help with the increased migrants. Ande McArthy, a retired nurse, and her husband, Michael, a retired physician assistant, traveled from Lake Huron, Michigan, to El Paso last week after their church put out a call to help for the Annunciation House.

The McArthys are among 12 full-time volunteers who help to sort clothes, handle day-to-day donations and tend to the needs of hundreds of migrants arriving at the shelters each day.

The El Paso City Council and County Commissioners voted recently to fund a position that would help coordinate volunteers. Mayor Dee Margo said the city will seek reimbursement from the federal government.

“It allows us to frankly take more action than we’ve been able to do in the past and justify that for a humanitarian need — an emergency need,” Margo said. “If we are required to spend some funds, we will.”

In McAllen, migrants deemed to have credible asylum cases are released to the Catholic Charities respite center, where they’re allowed to shower, given medical attention and helped with getting a bus or airplane ticket to their final U.S. destination.

Sister Norma Pimentel, who oversees the shelter, said she received a phone call two weekends ago from a Border Patrol official warning that the numbers were about to skyrocket. The next day, around 800 migrants showed up to the shelter, she said.

On Wednesday, clusters of migrants crowded the halls of the center. Lines stretched down long halls, as migrants waited to use the shower or pick up diapers. Teams of volunteers called migrants’ relatives to get bus tickets. Every 20 minutes or so, a new tour bus would drive up and deliver another 50 migrants into the shelter.

Among the throngs were Fredy Escobar, 27, and his wife, Katherine Lopez, 23, and three-year-old daughter, Ayleen Escobar. The family fled Guatemala earlier this year when corrupt police officers threatened to take over his car wash business in Guatemala City and tried to kidnap him, Fredy Escobar said.

They crossed into the U.S. from nearby Nuevo Progreso, Mexico, waiting 10 days at the international bridge and sleeping in a nearby church, until they were allowed to cross and seek asylum. He said he was surprised by the throngs of other migrants joining him in U.S. processing centers but was excited to get to Houston to start a new life.

“It won’t be easy. We’re starting over,” he said, “but we pray everything will turn out OK.”

The DEMOCRATS have given us the weakest immigration laws anywhere in the World. Mexico has the strongest, & they make more than $100 Billion a year on the U.S. Therefore, CONGRESS MUST CHANGE OUR WEAK IMMIGRATION LAWS NOW, & Mexico must stop illegals from entering the U.S….

As the respite center started to overflow last week, city officials got involved, opening new shelters and contracting buses to take the migrants directly to shelters rather than have them cluster around the bus station downtown.

Rodriguez, the city manager, said he’s dedicated several city officials to spearhead the problem and the city’s spending thousands of taxpayer dollars a day on the buses and other services.

He’s lobbied the federal government for reimbursement, but he’s not overly hopeful. In 2014, when a similar crush of Central American migrants strained city resources, local officials applied for $600,000 in federal disaster funds. After years of wrangling, they got just $140,000, he said.

“This is very similar to what we saw then,” Rodriguez said. “It’s real people and real time and real money.”